END_OF_DOCUMENT_TOKEN_TO_BE_REPLACED

The "large commercials" are reducing their short position so fast, they'll soon be bullish...!

CLEARLY, and as reported in the Commodities Futures Trading Commission's weekly commitments of traders report, the largest "industry insiders" commercial traders are reducing their collective net-short positioning at an accelerated pace, writes Gene Arensberg from Atlanta, Georgia in his Got Gold Report.

Not so clear are the reasons why. 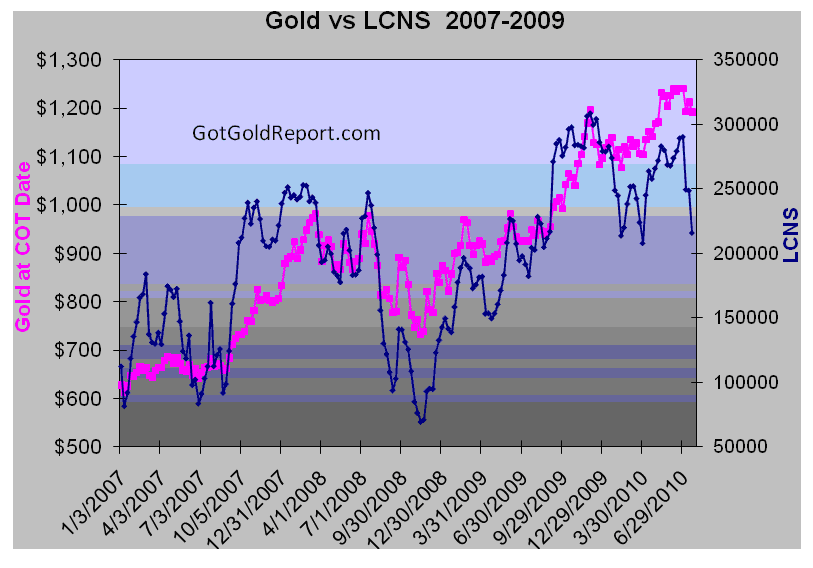 Over that three-reporting week period, and for each $1 lower in Spot Gold, the "Big Sellers" have covered or offset 1,531 contracts of their net short positioning. At just that pace, with no further acceleration factored in, the LCs would become net long gold in $1050 neighborhood.

Since gold slipped from $1240, in short, the Large Commercials have reduced their net short bets by the equivalent of 7.4 million ounces – about 231 metric tonnes. We can point to only three periods of faster reduction in the LCNS over a three-week period in the last 7 years of data.

We should also compare the nominal gold LCNS to the total open interest. That gives us a better idea of the relative positioning of the largest hedgers and short sellers – the Producer/Merchants and the Swap Dealers combined into a single category – on the Comex Gold Futures exchange.

And when compared to all contracts open, the relative combined commercial net short positioning (LCNS:TO – the most important graph we track here at Got Gold) fell sharply from 43.7% to 38.6% of all contracts open. 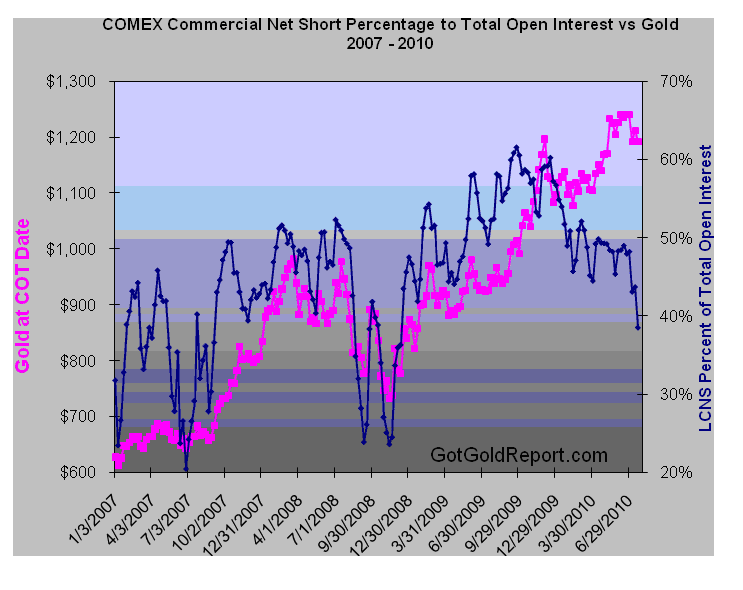 Notice, once again, that the LCNS dropped a good deal more than the open interest (LCNS down 32,684; Open Interest down 8,605).

The drop in LCNS outpaced the drop in open interest at a roughly 4:1 pace in the week ending last Tuesday. And when we see that, it suggests that the largest "paper gold" sellers are aggressively closing out their "hedging".

The fact that the LCNS:TO has fallen so far on what is essentially only a modest, roughly 7% pullback for Gold Prices suggests a major shift is underway in the futures market. We view the current LCNS:TO of 38.6% as considerably more bullish than bearish. The largest commercial traders, as a group, seem to be rushing to cover or offset their net short positioning as gold consolidates in the $1170-1210 range.

That doesn't necessarily mean that gold won't continue to sell off even more. It can and it might. But these date certainly do mean that the largest "hedgers" and short sellers of paper gold have closed out a substantial amount of their collective net short positioning on what amounts to a net $50 drop in the Gold Price, as measured on Commitment of Traders reporting Tuesdays.

Trade Gold – with direct access to the trading spread and instant settlement in secure New York, London and Zurich vaults – only at BullionVault...