END_OF_DOCUMENT_TOKEN_TO_BE_REPLACED

But does that mark the end of gold's bull market? Hardly...

YOU NEED both buyers and sellers to make a market, says Brad Zigler at Hard Assets Investor, especially in markets like the one in which gold is traded.

There's no shortage of players in the gold market presently. And there are, in fact, sellers aplenty. Commercial traders, as they're known, have been building up a net short position that could soon outsize the one which set up gold's December sell-off.

At last count, commercial traders held the equivalent of 326,571 futures contracts short,  betting that prices would fall. As of October 20, 2009 – six weeks ahead of an eventual $183 swoon – commercial traders were short of 328,344 Gold Futures. 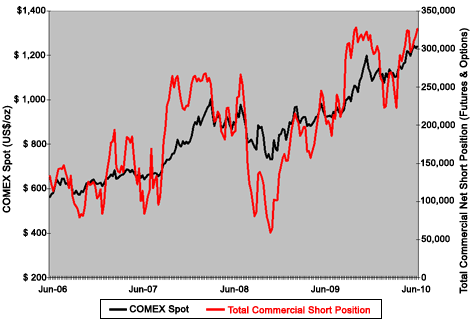 Who are these commercial traders? Well, you can, as the Commodity Futures Trading Commission does, break up commercials into two groups.

Swap dealers are primarily investment banks that use futures to manage residual exposures left over after matching long and short commitments internally on their books.

Over the past four years, producers/merchants/processors/users have accounted for 69% of commercials' net short positions. Swap dealers weigh in at 31%. And the current surge in commercial short positions is an indication that the so-called smart money – those that actually deal in Gold Bullion – are growing increasingly concerned about possible weakness in gold's price.

Selling Gold Futures at today's value, after all, provides them a hedge against the receipt of lower prices in the cash market later. But does this mean we're due for a gold sell-off? Given current market circumstances, probably. Is this the end of gold's bull market? Hardly. There'd have to be a substantial decline – down to the $830 level presently – to put gold's long-term trend in jeopardy.

Given the six-week lag between the last high net short position and the market's top, we might not see a price break immediately. But its likelihood has increased substantially. You can use this as an opportunity to lighten up or to add to your gold positions as you see fit.

Add to your Physical Gold position at the very lowest costs – with maximum safety – at Bullion Vault here...