END_OF_DOCUMENT_TOKEN_TO_BE_REPLACED

THE LARGEST of the very largest traders of Gold Futures on the Comex in New York seemed to be in a hurry to reduce their "net short" positioning, writes Gene Arensberg in his weekly Got Gold report for the Gold Newsletter.

Over the last reporting week of the Commodities Futures Trading Commission's commitments of traders (COT) report, released Friday, January 29, the very large traders classed as "commercial" reduced their collective net short positioning by a very large 25,029 contracts – some 9.1% – even as the Gold Price fell $40.84 an ounce, down some 3.6% between reporting Tuesdays.

That is the largest one-week reduction in commercial net short positioning since the April 7, 2009 report, when the commercials covered or offset a then startling 28,703 contracts, or 16% of their position, with gold trading at $881 an ounce.

The bottom line? Gold Newsletter subscribers received this issue of the Got Gold Report on Monday morning, Feb. 1st. As they know, we have been neutral on gold since our December 2, 2009 report as gold flirted with $1200 the ounce. We have been safely on the sidelines with the majority of our Gold Trading ammunition since then.

That may change very shortly, however, depending on how the gold market behaves over the next few trading days to two weeks. We see the gold market as once again very close to implied technical support, as shown in the miniature chart just below. 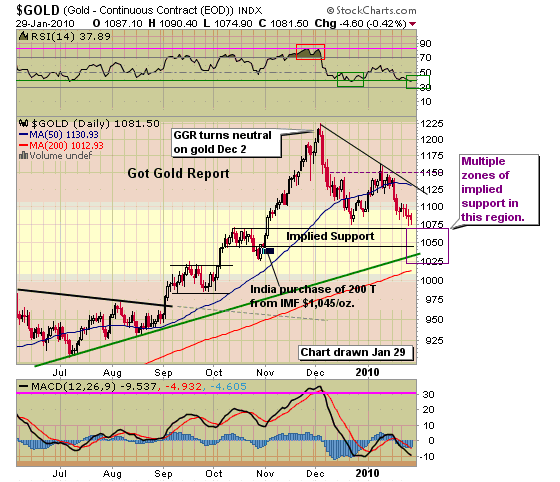 We cannot help but notice the uneasy tenor of the markets over the past two weeks. There is no doubt there has been a flight away from risk and into "safety".

Events in Washington and in Europe have investors, portfolio managers and traders worldwide on tenterhooks, and their reaction to that nervousness has been swift with the memory of 2008 still fresh.

We note selling pressure on just about all asset classes including our favorite commodities, gold and silver. Always more volatile, silver is literally at implied support, technically speaking. So, while silver is seen by some as vulnerable, it is also in the region where we can trade it from the long side with easily defined stops. There are also reasonably priced hedges available for the more cautious traders among us.

Despite material pressure on both gold and silver, we note only minimal reductions of metal holdings in the Gold ETF trust funds, and we even note some modest buying pressure for silver ETFs over the past week.

Large Gold Mining shares, in contrast, are still underperforming the Gold Bullion price, and that is worrisome. We will be on the lookout for when the big miners hold their ground despite gold and silver weakness. Until they do we have no choice but to respect their underperformance, and this is the main reason our short-term trading position has not already returned to a bullish bias for gold.

But although shares of the largest gold and silver miners have taken a stomach punch over the past few weeks, we have been impressed with the relative outperformance of the smaller, less liquid issues on down the mining share food chain. And when the "little guys" outperform the big miners, it is usually a more bullish than bearish signal.

Commercial traders in the currency markets meantime remain staunchly "net short" of the greenback, as they have now for nearly two months. They paid dearly for that net short positioning as the US Dollar has benefitted hugely from the "fear factor" over the past week. But while some of the issues hanging over the market remain (Greek debt, Eurozone politics, Washington's deficit) some have now been settled or are moderating (Bernanke, Massachusetts, bank bashing).

It pays to remember that when the Dollar index is rising, it is a measure of one sick fiat currency advancing against a basket of ailing basket cases in the huge global fiat currency leper colony.  Sooner or later more global wealth should be seeking refuge from government fiat currency I.O.U.s – certainly in the true safe haven of gold metal and – less certainly but probably – in silver also.

The most interesting of all the indicators we follow closely is this week's very large reduction to the net short positioning by the largest Gold Futures traders in New York. Since gold challenged the $1200 level in early December, commercial industry traders (acting for miners, refineries, bullion banks and wholesales) have maintained extremely large net short positions.

This last week we saw a very large reduction in those bearish gold bets. 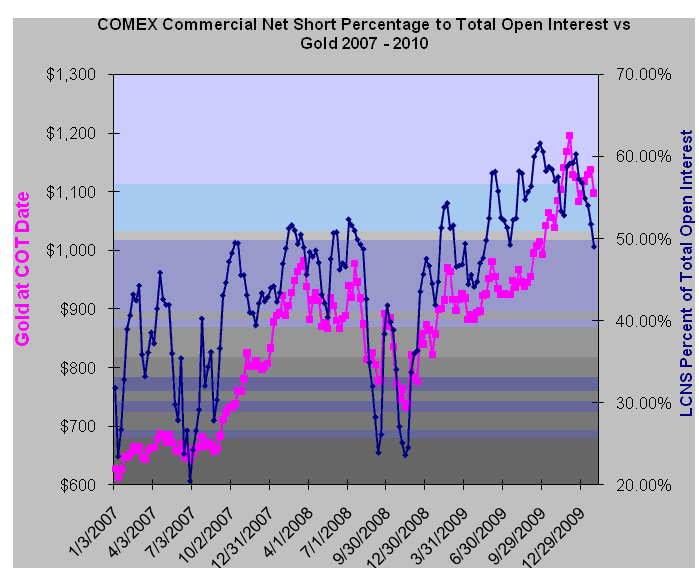 We view very large, spiky changes in the Large Commercials' Net Short position as signals to get ready to take action.

Very large changes often, but not always, precede major movement and turning points in the gold market. The one thing we know for sure is that the status quo is changing in a big way when these giant changes occur.

So, as gold sold off about a "C-note" in paper Dollar terms, the largest, best capitalized and presumably the best informed traders in US Gold Futures have reduced their net short positioning by an amount equal to about 185 tonnes of gold metal.

That kind of heavy activity – down 25,000 contracts in a single reporting week – is usually associated with significant long liquidation and often (but not always) occurs at or near important turning points. Such large changes are, at the very least, a call to attention for sidelined traders.

We reiterate our longer-term view that the world will most likely continue down a path of fiat currency debasement, weakening confidence in all fiat currencies. We see the setup as long-term very bullish for gold metal and extraordinarily bullish for silver looking well ahead – if the world "holds it more or less together".

With China now putting the brakes on its banking and credit growth, and with overly-large physical stockpiles of most base metals now built, we suspect an overdue, much needed correction in base metals is finally underway. We suspect that some of the risk capital coming out of those industrial metals just might migrate back into precious metals later on in Q1 of 2010.

Therefore, we still believe harsh weakness in precious metals is to be bought rather than strength sold in Q1 2010, but we are not yet convinced the current corrective action is finished for gold. However, our "antennae are up" given the signals we cover here in the Got Gold Report.