END_OF_DOCUMENT_TOKEN_TO_BE_REPLACED

AS ONE might expect, the "safety trade" is back on, writes Addison Wiggin in the Daily Reckoning.

Stocks are tanking, with banks across the board taking the biggest hit. Good thing officials banned short-selling financial stocks in France, Italy, Spain and Belgium last week, isn't it?

With the Dow's 450-point plunge, all the gains since a week ago today are gone. Ditto the S&P and the Nasdaq.

The "Philly Fed" – a Federal Reserve measure of manufacturing in the mid-Atlantic region – plunged deep into negative territory, to a grim level last seen in March 2009... 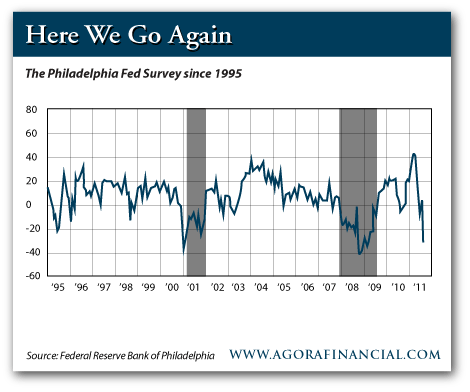 A hit list of additional domestic economic numbers in the US isn't helping much:

Add all these data points up you get a giant sigh of disgust from economic pundits across the nation. Every one of these numbers was worse than the "consensus estimate" of economists polled by outfits like Bloomberg and MarketWatch.

Likewise, the "safety trade" is driving money into Treasuries... forcing yields down. The yield on a 10-year Treasury note set a record low this morning.

At last check, Uncle Sam will give you a whopping 1.98% return on money you lend him for the next decade – even less than during the panic low on Dec. 19, 2008.

Perspective: On that same date, gold went for $840 an ounce. Treasuries have a newfound companion when it comes to the safety trade.

"I think we've reached a stage," says First Eagle Funds' Jean-Marie Eveillard, "where [gold is] not just a hedge against inflation, it's a substitute currency."

"We have had a pure paper money system for 40 years when Nixon closed the gold window in '71. That system, or what passes for a system, is fraying at the edges and gold becomes a hedge and some kind of insurance policy."

Even our favorite Latin American caudillo has figured that out. Venezuelan president Hugo Chavez nationalized the country's gold mines this week.

Well, the ones that weren't nationalized already anyway. Not that Venezuela is much of a gold producer to begin with.

Lost in the noise surrounding this announcement is something we find a lot more significant: Chavez is repatriating much of Venezuela's gold held overseas – about $11 billion worth.

The Bank of England, J.P. Morgan Chase, Barclays, Standard Chartered, the Bank of Nova Scotia...all of them recently got a request from Chavez asking that the gold he has stored with them be shipped home.

"We've held 99 tons of gold at the Bank of England since 1980," declared Chavez. "It's a healthy decision" to bring it back.

So where does gold go from here? In the options market, traders are making some extreme bets.

There's a high amount of open interest – 14,532 contracts, says the Financial Times – in December 2011 gold calls with a strike price of $3,000. That's a lot of people counting on nearly a double in four months.

The stock market dragged down Gold Mining stocks yesterday, but not much. The GDX ETF of major gold miners is down about 2/3 of a percent.

Over the last 10 trading days, gold stocks have performed a lot more like gold than stocks: 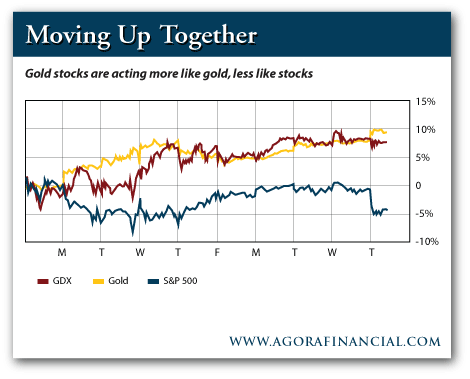 "Here we are right now with a very interesting set of circumstances," said Daily Reckoning colleague Byron King during our teleconference this week. "The price of what they sell has gone up a lot, and a big part of the cost of what they do, which is energy, has gone down quite a bit."

"So you've got higher income from your gold sales and you've got lower cost from cheaper oil and cheaper energy. That ought to go to the bottom line, and from a pure valuation standpoint, that ought to be good for the Gold Mining stocks."

The breakout of gold stocks in recent days marks the reversal of a stunning trend as shown on this chart, courtesy of our friend Bill Baker and the crew at Gaineswood Investment Management and the Marlmont Fund: 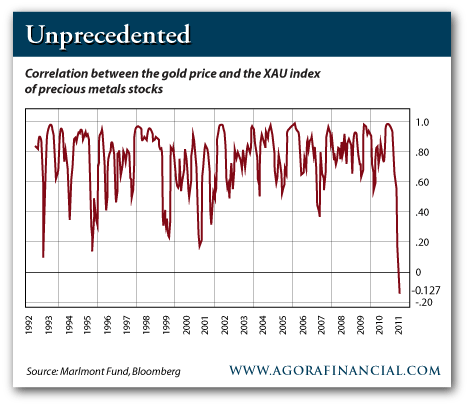 This shows the correlation between gold and gold stocks as represented by the Philadelphia Gold and Silver Index, commonly known as the XAU.

"During the second quarter of this year," says a new report from Marlmont, "shares of precious metals companies behaved strangely, actually going down in value when gold appreciated."

"This negative correlation has never existed in the data that extend as far back as we could access, to 1992. There have been very short bouts when the movement of miners and the metal did not move well in unison, but never this."

Their conclusion: "We frankly could not conjure up a more convincing case for owning companies that search for and produce precious metals – especially now that in recent decades these have underperformed Gold Bullion as dramatically as only seen in the meltdown of 2008."

Looking to add physical Gold Bullion to your portfolio? Make it safer, cheaper and easier with BullionVault...