END_OF_DOCUMENT_TOKEN_TO_BE_REPLACED

What might it take to knock this multi-year bull market off its stride...?

HOW ABOUT another big hand for gold ladies and gentleman? says Dan Denning in his Daily Reckoning Australia.

What a great performance by the yellow metal. The near-month Gold Futures contract for element number 79 on the periodic table traded at an all-time high in New York. Gold's new benchmark, for now – and in the derivatives market – $1257.30 an ounce. 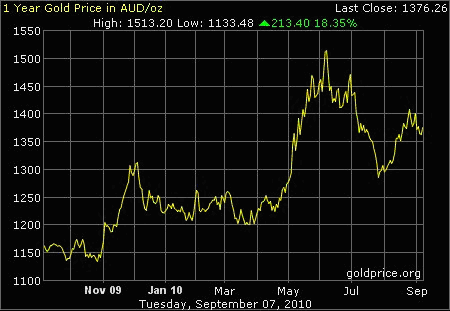 You can see that Aussie gold has some work to do before it makes new highs like the USD counterpart.

A weaker Aussie Dollar would do the trick. And who knows? Maybe another twelve months of political uncertainty and a renewed debate about a mining tax will weaken the local unit. Of course it's also possible that the prospect of a weak government with a small majority is bullish for the Dollar inasmuch as that government won't be able to do much. We'll see.

In the meantime, all the real double- and triple-digit action in the gold market is in the equities. This is where you get the most leverage to the Gold Price. But we have to admit, we're a bit ambivalent about it. This moves you into the realm of speculating more than buying an undervalued asset that's due for a mean reversion.

Our old desk mate in London, Adrian Ash, does a good job in this story for Forbes magazine of looking at the merger and acquisition activity in the gold market. Ade points out that for big Gold Mining producers to gain more exposure to the metal's rising price, the quickest way is through acquisition. New discoveries of major gold deposits aren't keeping up with demand, and, in fact, have fallen steadily since 1980.

You could argue, of course, that even if the supply side for gold looks pretty bullish, the demand side could quickly change. What would make that happen? We're tackling the scenarios in more depth in an early edition of the next issue of our newsletter Australian Wealth Gameplan. But without elaborating, the things that could lead to lower gold demand are:

But it's really the first issue – the investment demand for gold – that probably holds the key to its run from here. Our fundamental argument is that owing the collapse of the Welfare State funding model (perpetual debt serviced by higher taxes) gold is being remonetized into the global financial system. It's not just a commodity.

As a practical matter, though, that's probably not what most investors think when they Buy Gold shares or a Gold ETF. That's okay too, though. What it means, we reckon, is that gold is finding a place (albeit very small) in the asset allocation/diversification strategies of investors. This hasn't really happened before, except on the lunatic fringe where we hang out. A minor shift in preferences away from equities and bonds and toward precious metals (real money) is enough to support considerable gold demand.

That's probably a claim we should quantify and prove. And we will. But we'll do it on our full research report for paid subscribers first and report back to you later.

What makes us nervous about Gold Mining stocks – especially Australian ones, but in a good way – is that you can never quite tell what's going on in the trading action. It's true that an inherently irresponsible monetary and fiscal policy globally makes gold stocks very attractive because of the leverage to the Gold Price.

But it also – maybe – true that if you want to tell when the insiders know something is about to happen in a stock (any stock) it gaps up on unexplained volume and begins making new 52-week highs. Our friend Phil Anderson was careful to point out at last night (during one of his charting seminars) that new 52-week highs and gap ups are not a sure-fire indication of insider trading.

We couldn't help but think of connecting the dots ourselves. So check out the chart of Andean Resources below. 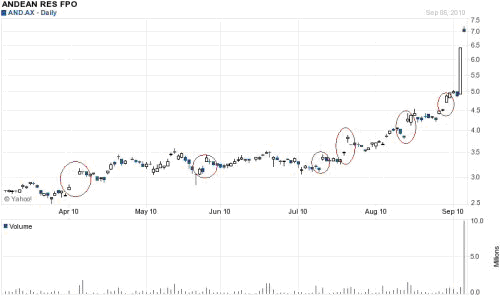 You'll see it does the things Phil spoke about – gaps up and makes new highs. You'll also see the last gap up (break) we've circled was days before Andean informed the ASX that the company had been approached by no-less than two other potential acquirers.

This would seem to confirm the chartists and traders like our colleague Murray Dawes, who maintain that nearly everything you need to know about when to buy or sell a stock can be found in an analysis of the chart. Dawes buys and sells the breaks as well, and uses a careful combination of moving averages to study momentum.

We admit it's not our style. But it's more and more intriguing in a market like this. Of course the fundamentals matter. But if the price action can correctly tell you what "the market" knows about a stock before a company reveals that knowledge to the ASX, maybe it is the sort of thing you can use to your advantage. Stay tuned.

The safest gold at the lowest prices, only at BullionVault now...