END_OF_DOCUMENT_TOKEN_TO_BE_REPLACED

Gold has broken out to new record highs against all the world's major reserve currencies...

GOLD has a reputation as a Dollar play – but it's performing very well against other currencies too, notes Brad Zigler at Hard Assets Investor.

You'd have to be Rip Van Winkle to have missed the news of the fresh highs scored by Gold vs. the Dollar recently. And just as Van Winkle is quintessentially American, for a long time, so too were the new records in the Gold Price.

Prior to the US Thanksgiving holiday, gold measured in Dollars scored 16 record-high days out of November's 18 trading sessions. Thus the run-up in the yellow metal's value was pooh-poohed by some observers as being more symptomatic of a Dollar bear market than of gold's innate bullishness.

After all, new highs weren't being notched by gold denominated in Euros, Sterling or Yen – that is, not until last week.

Other reserve currencies belatedly boarded the gold bandwagon last week. By the time the turkey was served in the US, gold was 4-for-5 in hitting new highs against the reserves. Even against the Yen, gold broke a series of new 26-year highs

Throughout most of November, it looked as if gold's February records against the European currencies might hold. But oddly enough, it was the Swissie – the reserve currency that held its ground better than the rest over the past decade – that yielded first, allowing gold to notch a new high on Nov. 18.

New records then followed almost daily. The Euro and Pound gave way on Nov. 24, as did the Yen, with the price of Gold breaking its 15-month top versus the Japanese currency... 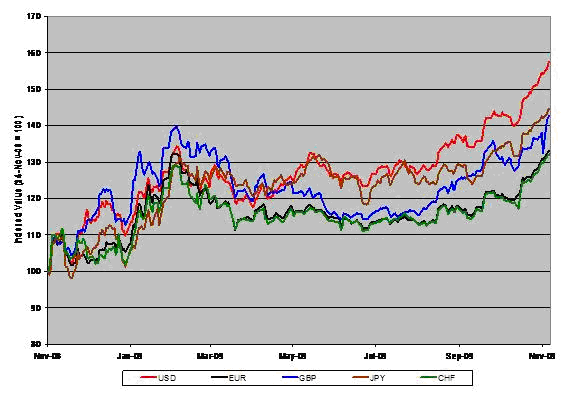 The Yen's relative strength represented a lot of safe-haven and carry-trade buying, a reversal of the greenback's current fortunes. The Swiss Franc's weakening, however, was largely attributed to central bank buying of Dollars, meant to staunch the export hemorrhage wrought by the Swiss currency's appreciation.

Adding to gold's buoyancy was talk of Indian central bank interest in adding to last month's 200-tonne metal purchase, as well as other central banks (namely those of Sri Lanka and Mauritius) adding the metal to diversify their reserves.

And the metal isn't just rising in the so-called "major" currencies, either. At a 32.9% increase over the past year, gold's appreciation in Indian Rupees has almost matched its increase in Dollar terms. Even more dramatic was gold's rise in the currency of Turkey, another high-demand market. In Lira, gold advanced 35.5% over the last 12 months.

Gold's recent price action bespeaks its utility as an uncertainty hedge. Investor and central bank jitters about the Dollar, coupled with the prospect of inflation on the horizon, have pushed metal prices higher.

Over the past week, the Swiss Franc nosed its way back to parity with the US Dollar, a feat last accomplished more than 18 months ago. The Swissie has been a stealth currency, flying under investors' radar since the last central bank intervention in March. That's probably where the bankers in Bern are likely to maintain the Franc on a course hugging that of the euro.

The correlation between the Euro and the Franc, in fact, is the tightest of all the reserve currencies.

Unsurprisingly, when measured through gold, the Franc is least correlated to the US Dollar. After all, the greenback and the Swissie represent the two extremes of metal purchasing power over the past decade. Last week, the Yankee Dollar fell to its weakest level vs. the Japanese Yen in 14 years. Japanese consumer prices fell again in October, magnifying the deleterious impact of a surging yen on the fragile Japanese economy. Prices have now fallen for eight straight months.

A strong Yen and deflation represent a dangerous cocktail for the world's second-largest economy, dampening company profits, which in turn curtails consumer spending.

The Japanese finance ministry attributes the Yen's rise not only to the Fed-managed weakness in the US Dollar, but also to general sentiment that China's Renminbi is undervalued. Essentially, the Yen is being used by currency speculators as a proxy for the Chinese currency. Recent comments made by Japanese finance minister Hirohisa Fujii singled out the Yen's recent rise as "one-sided". The Japanese government, he said, would take appropriate measures should the currency market become disorderly – code-speak for intervention.

Japan hasn't intervened in the currency market since March 2004, but such action would become more likely, though, if Japanese deflation persists. All that was seemingly forgotten on Friday, however, when the buzz about Dubai's government investment company, Dubai World, turned into a roar. The prospect of a six-month delay on repayment of Dubai World's $60 billion-plus debt sent markets reeling before the weekend.

Gold suffered its largest loss in nearly a year – at one point down as much as $58 in early trading – as global equity markets and currencies sold off.

Risk takers were essentially sent packing over the holiday, as dealers' thinly staffed trading desks only made matters worse. Junior traders, still gun-shy from last year's meltdown, wanted nothing more than to duck and cover. The broad retreat from riskier assets pushed US Treasury prices up sharply, boosting the Dollar while commodities prices tumbled.

The big question faced by investors this week is whether the Dubai investment company losses will be an impetus to push global markets over the edge again, a la Lehman Bros., or if the Friday panic is simply a short-lived knee-jerk reaction.

The important thing to remember, in any case, is that the Dollar hasn't yet taken a 10-count as a safe haven.

Looking to Buy Gold today? "If there's an easier way," says one BullionVault client, "I've yet to find it..."