END_OF_DOCUMENT_TOKEN_TO_BE_REPLACED

Compared to gold and the Chinese RMB, the US Dollar is clearly the new American Peso...

In USD terms, foreign goods and services have more than doubled in price in fewer than seven years. This is not some economic index based on hedonistic mathematical or substitution theory; this is based on my hotel, taxi, and food bills from Bali to Bangkok, and from Toronto to Rio.

Make no mistake – the US Dollar, in limitless supply, has an intrinsic value of zero. This fact has been incessantly broadcasted recently by global banking figures as they stand ready to "inject" unlimited "liquidity" to stave off any crisis ranging from the subprime market collapse to a derivatives meltdown to economic recession.

It is only natural that the price of goods goes up when money is printed without abandon. And you wonder why money aggregate figures are no longer reported by US officials, citing the cost of compiling such data...?

One can hardly understand the real impact of monetary depreciation until you travel abroad, outside the United States. Given that less than 15% of the US population holds a passport, it's no surprise that the alarm has not been sounded at home yet. Domestic price inflation on goods has been kept relatively at bay thanks to a suppressed Chinese currency (RMB), reducing the cost of import.

But that, in my opinion, is about to change.

Oil is an integral part of our daily living expenses, and the US public often voice complaints about the high price of oil. However, many overlook that just as much money is spent on Chinese made goods as is on fuel – day in, day out.

Given the extent of the US trade deficit with China (now $150 billion per year), there is no reason for RMB not to appreciate 50% against the Dollar, which is what the Euro and Canadian Dollar did from their 2002 lows. 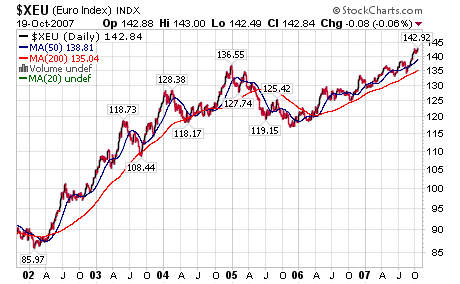 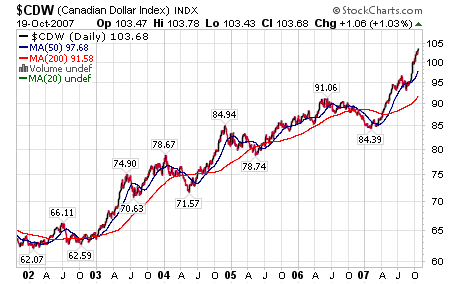 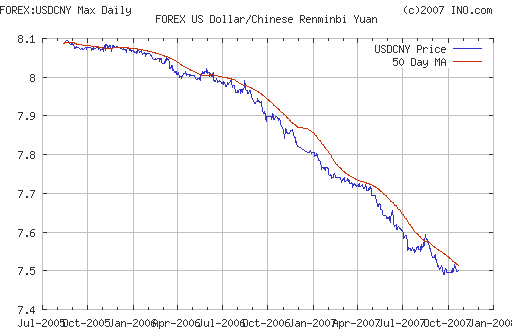 I spend at least $500 a month on Chinese goods, and to me, the logic of asking the Chinese to revalue their currency upwards is no different from asking the Saudi's to jack up their oil price further, which is no logic at all for a US consumer.

For investors and savers, meantime, holding US Dollars is like playing musical chairs. When the music stops, the one holding the most Green IOUs will lose.

With the Dollar now rapidly sinking vs. Western currencies, the Dollar's supreme image is now very wobbly. Having built up a war chest of $1 trillion, the Chinese need no more Dollars to shore up confidence in their own paper within the international arena.

Combining these two factors, the Chinese government will likely loosen the RMB peg to the Dollar at a faster pace, and we expect a minimum of 20% appreciation in RMB over the Dollar (equalling 5 or 6 RMB to 1 USD) in the next 12 to 18 months.

Gold, of course, is international money, and it will follow the RMB, climbing to a Gold Price of over $1,000 per ounce over the same period. This gold target is a conservative estimate given that other commodities from oil to copper have all quadrupled from their lows of this decade.

Gold and the RMB's rise will be the final chapter in the Dollar's saga as the world's reserve currency. It will also end the era of low-priced Walmart goods made in China.

Welcome to the American Peso.