END_OF_DOCUMENT_TOKEN_TO_BE_REPLACED

Looking to make a purchase of gold? Check this technical analysis of Gold charts...

PRECIOUS METALS have taken the back seat in the recent rally in commodities, says Nick Jones of The Real Deal for Whiskey & Gunpowder.

While corn, soybeans, oil and many other commodities were either making fresh contract or hitting new all-time highs on a daily basis this spring, precious metals – led by Gold – simply consolidated.

This was to be expected after the fantastic rally in Gold from the mid-$600s above $1,000 per ounce in mid-March.

Personally, I exited the last of my precious metals mining positions when the Gold Price was at $975 per ounce. I've sat on the sidelines of the gold mining equity market ever since (I do still own physical metal). But now I believe that we are currently approaching a good entry point in the precious metals market, both for stocks and metal.

Timing Your Gold Purchase: Why Now?

I'm not usually a big chart guy, but I would like to throw some charts at you and explain why I will be doing some discount shopping for my favorite mining stocks in the not too distant future.

Looking at the Gold Price itself, the first chart I would like to discuss is the three-year daily chart: 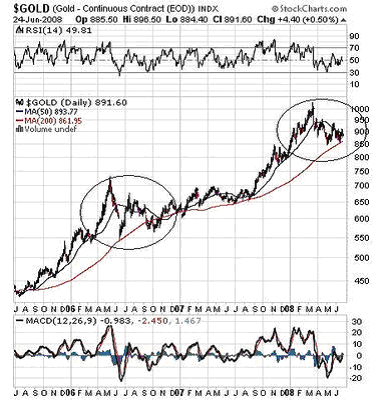 Please take note of the similar chart patterns in the circled areas. After spectacular rallies, both in May 2006 rally and then to mid-March this year, Gold entered a consolidation period that took the form of a descending triangle.

After the top of spring '06, gold proceeded to break out at $625 per ounce and rallied to a 60%-plus gain. Might that happen again?

The other point about this chart is the extremely strong underlying support given by the 200-day moving average – roughly the average price over the last year's worth of trading sessions. In rare instances, such as following the '06 peak, gold briefly broke below its 200-day moving average, but it didn't stay there for long.

The next chart I'm going to look at is the three-year weekly chart: 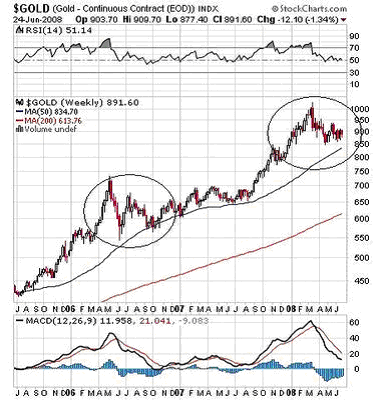 I like weekly and monthly charts simply because they drown out some of the intraday noise that might show up on a daily chart.

You will notice that this chart has some strong similarities to the daily chart. It has the same descending triangle formations following intermediate peaks. Even more so than the 200-day moving average in the daily chart, the 50-week moving average (also the 12-month average) has been pretty much unbreakable during this bull rally.

We have entered a trading period where the spot price is trading between the 50- and 200-day moving averages. They will continue to squeeze together until something breaks. This is a signal that a strong move is near.

I've made my argument for the possible beginning of a new bullish phase in precious metals, so the next question to pose is how high will the next rally take us? This is a difficult question, especially with the ever-changing atmosphere in financial markets.

Given that, I believe I can make an educated guess as to how high the next rally will take us. I am going to borrow a chart from my co-author John Polomny, as well as use the charts above, to come up with some specific numbers: 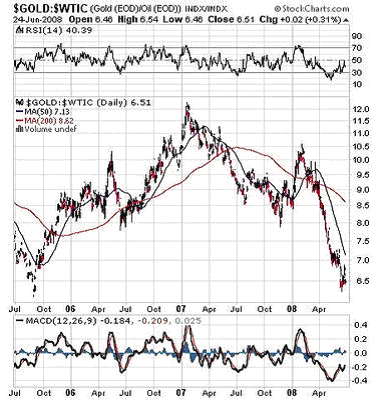 There is a strong correlation between the price of oil and the price of gold. The last time the Gold:Oil Ratio dropped to current levels, it rallied sharply.

Nothing is guaranteed, of course. But let's go ahead and assume we move back to 12 barrels per ounce. Let's also use current oil prices of $135 per barrel. That gives us a target price for Gold around $1,620 per ounce.

Keeping that in mind (along with all the usual caveats about "forward looking statements" and the risks of taking any analysis as gospel, of course), I am going to refer back to the daily chart. The percent rise in the price of gold between the 2006 breakout of $625 and the peak of $1,025 per ounce was approximately 60%. If the next rally moved another 60%, we would be looking at gold around $1,600. This is consistent with the figures I derived using the gold/oil ratio.

Using all of the above data, I believe that the next interim high will be in the neighborhood of $1,700-1900 per ounce. But there are a couple of things to keep in mind going forward.

In a bull market, like the one we've had in gold since 2000, each consecutive bullish phase tends to move by a higher percent than the prior one. For example, although the rally to $1,000 gold was approximately a 60% rally from the last intermediate high, the next rally could result in a 70% move.

Note that "could". It "might not". But it's a distinct possibility, coming as a result of the Johnny-Come-Lately's entering the market. Each rally simply has more investors than the prior one.

There's another item worth noting. Although the 2007/2008 gold rally was spectacular, it didn't sprint out of the gates. You can see that at the end of 2006 and in the first half of '07, gold just didn't move much. After a brief rally, it kind of puttered around. But looking more closely, you can see that the chart was actually making higher highs and higher lows, building a solid base.

We may have a period like that in the following months. But all in all, I think we are close to a really great entry point for purchasing precious metals. I would also recommend following a couple of your favorite mining stocks and getting comfortable with their price action in order to determine a proper entry level.

There's no reason to hurry. Take your time and make your moves when you're ready.