END_OF_DOCUMENT_TOKEN_TO_BE_REPLACED

Measuring against gold reveals the true value of investments...

ALL OVER the world, central banks are manipulating fiat currencies. This is distorting asset and commodity prices. To invest successfully, investors need to have a good idea of what things cost and what they are really worth.

Gold – the world's oldest and most stable form of money – gives us a way to get that insight, writes Charles Vollum for Casey Research.

To that end, below is a sampling of current prices measured in grams or milligrams of gold. Price comparisons are against prices as of June 10.

The month of May was rough for all the currencies, with the Euro and Japanese Yen making new all-time lows on the 24 and 25 May, respectively, while the US Dollar made a new all-time low on June 6. Since then, they have all been struggling to regain the lost ground.

Last week, the much-beleaguered euro made the most headway, followed by the Yen. All of the currencies are down significantly from their year-ago levels, but the Dollar has fared much worse than the others, down 20%.

US Treasuries have been a terrible investment for at least the last eight years. Since 2002, shares in the iShares 1-3 Year Treasury bond ETF (ticker symbol: SHY) have lost 76% of their value, despite an apparent increase of 29% when measured using Dollars.

While Treasuries ticked up about 1%, following the lead of the USD, they remain down about 19% from a year ago.

As with bonds, nominal prices have risen as currency values have fallen, leaving investors with lost purchasing power and huge tax liabilities.

Silver has been strong, not just in Dollars but in gold as well. On February 18, it closed convincingly above its long-term resistance level at 0.7 grams of gold. This was followed by a fast run-up to the 1.0-gram level, last seen in the early 1980s, and then a quick drop back to the 0.7 level.

There is a lot of concern about rising commodity prices recently. Although many of these commodities are up strongly in the last year, they are rebounding off deep lows. 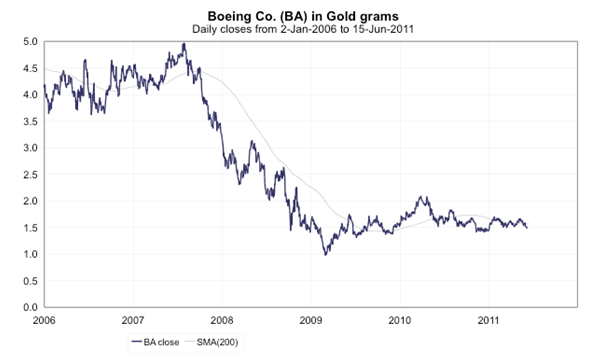 An article on MarketWatch discussing the Dow Industrial stocks stated that for 2011, Boeing is the best-performing stock in the index. On May 10, it was up 22.5% – a new 52-week high and very near its price three years ago (all in US Dollar terms, of course).

The chart above shows the real situation: rather than making a new 52-week high, the stock was down 10.1% from its 52-week high set last July. It was up 14.2% for the year, not 22.5%. And rather than approaching its price of three years ago, it was in fact down 40%. And Boeing was the best-performing stock of the 30 Dow Industrials!

Of course, all this doesn't tell one whether Boeing is a good buy at today's prices; to determine that, one would have to dig deeply into its fundamentals. But it does show that the conventional media, by using Dollar prices, give very distorted ideas about how cheap or expensive things really are.

Want to invest directly in physical Gold Bullion? Make it easier and more secure when you do it with BullionVault...