END_OF_DOCUMENT_TOKEN_TO_BE_REPLACED

After last week's steep decline in Gold Prices, what should we expect for precious metals going forward...?

By the close on Friday, the metal was down 6.7% (based on London PM fix prices).It got downright irritating when the mainstream media seemingly rejoiced at the decline in Gold Prices. Economist Nouriel Roubini poked fun at gold bugs in a Tweet. Über investor Dennis Gartman said he sold his holdings. CNBC ran an article proclaiming gold was no longer a safe-haven asset (talk about an overreaction).

While the worry may have been real, let's focus on facts. Have the reasons for gold's bull market changed in any material way such that we should consider exiting? Instead of me providing an answer, ask yourself some basic questions: Is the current support for the US Dollar an honest indication of its health? Are the sovereign debt problems in Europe solved? How will the US repay its $15 trillion debt load without some level of currency dilution? Is there likely to be more money printing in the future, or less? Are real interest rates positive yet? Has gold really lost its safe haven status as a result of one bad week?

And one more: What is the mainstream media's record on forecasting Gold Prices?

Our take won't surprise you: not one fact relating to the trend for gold changed last week. We remain strongly bullish.

So why did gold, silver, and related stocks fall so hard?

The reasons are still in play (the MF Global fallout, a rising Dollar, year-end tax-loss selling, and the need for cash and liquidity to meet margin calls or redemption requests). Last Wednesday's 3.5% fall took on a life of its own, selling begetting selling, fear adding to fear (especially the case with Gold Mining stocks). None of these reasons, however, have anything to do with the fundamental factors that ultimately drive this market. Once those issues shift, then we'll talk about exiting.

So, should we buy now? Is the bottom in?

Let's take a fresh look at gold's corrections and compare them to the recent one. I've updated the following chart to include the recent selloff.

[How do I calculate the data? I look for the periods in every annual gold chart that represent a distinct fall greater than 5%, then measure the highs and lows.] 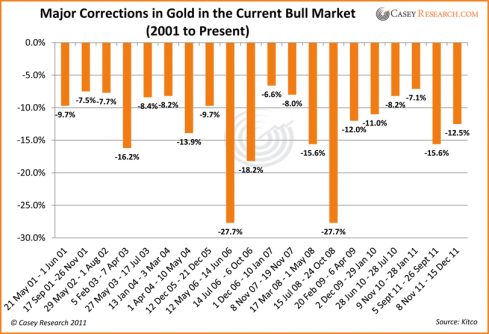 Our recent drop equals 12.5%. This isn't to suggest that the correction is over, but it does show that we've already matched the average decline, which is also 12.5%. This comes on the heels of the 15.6% fall in September. You'll notice something else: We've now had three major corrections (greater than 5%) in one year, the first time that's happened in this bull market.

The worst-case scenario would be a drop that matched the biggest on record, 27.7%. From $1,795 – the recent interim peak price – that would take us to $1,295. That wouldn't be fun, but a fall to that level would not by any stretch signal the end of the bull market. And it would represent a true blood-in-the-streets buying opportunity. After all, that's exactly what happened in 2006 and again in 2008, and in both instances gold eventually powered much higher. The bears were wrong then, and I believe they'll be wrong again this time, even if that extreme scenario were to come to pass.

Here's the updated picture for silver: 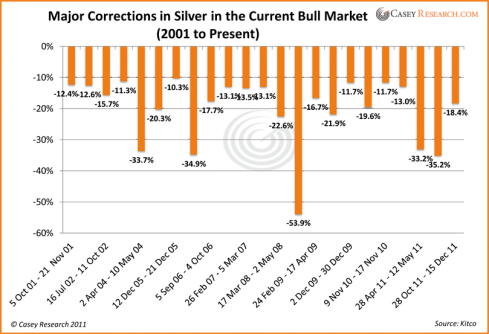 Silver's volatile nature really comes through in these data, which measure corrections of 10% or more. The recent decline tallies 18.4%. It, too, comes on the heels of a recent correction, a 35.2% tumble in September. The average of these declines is 20.3%, which would take our current correction to $28.22, close to last Thursday's price. Like gold, we've now had more corrections this year (four) than we've ever had in this bull market.

The worst plausible scenario we see for silver in the near term would be a fall to $16.32, matching 2008's 53.9% drop. But you'd have to be awfully bearish to think it will plummet that far.

These data should actually give you some comfort. We've been here before. We've seen worse before. And yet, in every instance, silver and Gold Prices eventually climbed higher. So, unless you really believe that Obama and Merkel have brought happy days back to the world economy, precious metals should resume their ascent, and probably sooner rather than later. And when they do, you may well never be able to buy at these prices again. Those who were too scared to buy at $560 in 2006 and $700 in 2008 missed out on what were some of the greatest buying opportunities of this bull market.

Would I buy now? Given that each metal has already met its average decline, and that both have seen more corrections this year than any other, we're likely closer to the bottom than the top. So yes, I decided to Buy Gold last week.

Either way, my advice is to spend a little more time watching the drivers for gold and a little less time worrying about the price. Until those things change, look for an entrance, not an exit.

Get the safest gold at the lowest possible price – using BullionVault's 24/7 live markets...