END_OF_DOCUMENT_TOKEN_TO_BE_REPLACED

The sharp drop in silver and Gold Prices calls into question the role of precious metals as a crisis investment...

LET'S FACE IT. You don't go into a Mexican restaurant to order Fettuccine Alfredo; you don't go to Home Depot to buy a wedding dress...and you certainly don't go into gold and silver to lose money during a currency crisis, writes Eric Fry for the Daily Reckoning.

What the heck is wrong with the precious metals? 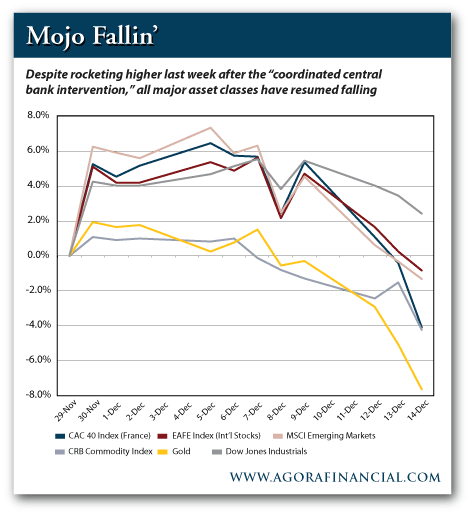 As the chart above shows, most major stock and commodity markets have already surrendered the huge gains they achieved after November 30, when six central banks announced "coordinated intervention" to support distressed European banks. (Only US stocks still cling to a slight gain). But gold has been the biggest loser.

Despite the obvious inflationary implications of central bank intervention in the currency markets, gold can't seem to get out of its own way. In the midst of a currency crisis that has seen the Euro lose 9% of its value against the Dollar in just three months, gold is down 17%, while US stocks are up. 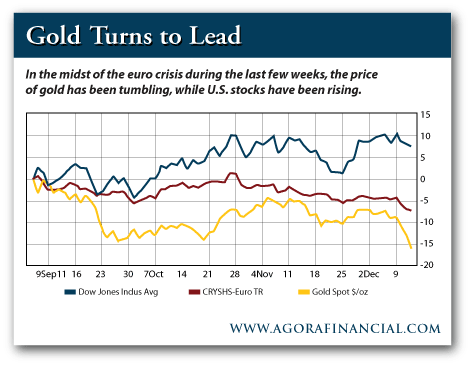 Not surprisingly, gold's numerous naysayers are wasting no time saying their "nays."

"When it comes to investment safety, gold has near-mythical status," writes James Mackintosh for The Financial Times. "Sadly, it has repeatedly turned out to be a myth that gold holds its value during periods of panic. Investors were reminded of that once again yesterday, when the precious metal plunged 4 per cent or $68...

"Gold is meant to be a haven, and in periods of mild fear it does rather well," Mackintosh continues. "But just as in 2008, when times get really tough, investors prefer cash to gold — and Dollar cash at that."

The guy's got an argument. But is it a good one?

Without a doubt, gold has delivered a disappointing performance of late. But even after yesterday's shellacking, gold is still up 9% over the last 12 months, compared to a loss for the S&P 500 Index. Likewise, gold has greatly outpaced the S&P over the last one, three, five, ten and fifteen years! (The 20-year mark is a "dead heat.")

Bottom line, gold has performed its job with meritorious distinction. But of course, that's history. The future is what most of us care about. And we'd care to know if gold's future will look anything like its illustrious past.

Over the short-term, the financial markets can fall hostage almost any form of groupthink, no matter whether that groupthink be intelligent or idiotic. But over the long-term, the markets usually escape their captors.

At the moment, gold is disappointing its fans, which begs the question: Is gold a good investment, temporarily held hostage by the groupthink that considers the Dollar a safer "safe haven" asset? Or is gold genuinely a bad investment that deserves exactly what it is getting right now?

This writer cannot answer that question with certainty, but he can respond to it with conviction: Long-term, gold is a better safe haven than the Dollar. Short-term, anything goes.

Having said that, unrequited affection is always painful. Those of us who have embraced gold as our "main squeeze," financially speaking, are receiving nothing but backhands across the face.

No love whatsoever. In fact, the more we commit to the relationship, the greater our pain. So we'd like to know, will gold ever love us back?

"The fragments of alarming news that fill the pages of The Wall Street Journal and The Financial Times are not unrelated," observes James Grant, editor of Grant's Interest Rate Observer. "They form a coherent design. The derangement of money and banking is the central organizing principle. Banks are teetering and currencies are churning because of the ideas we live by. Paper money and socialized risk-taking got us into this mess. More the same is how the central bankers seemingly intended to lead us out... The world over, governments have met, are meeting, or will soon meet financial and monetary troubles with the printing press or its digital equivalent."

Unfortunately, Grant's compelling long-term argument for owning gold is providing very little solace at the moment. Gold is falling...and it may continue falling, if we are to believe what the "charts are saying." Gold fell through its 200-day moving average yesterday, which is very "bad voodoo," according to those folks who divine future price trends from squiggles on a chart.

Furthermore, the precious metals are clearly suffering from one trend we can clearly see, and maybe one more that we can't see.

The visible trend is the German non-response to Euro crisis. So far, the Germans refuse to launch a rescue campaign that relies on printing Euros. Instead, the Germans advocate a combination of austerity and tax hikes. However prudent this strategy may or may not be over the long term, near term it looks awfully deflationary, recessionary...and bearish for gold.

As for influences we can't see, rumors are running rampant that the MF Global bankruptcy is triggering a series of forced liquidations. If true, such liquidations could easily produce steep price drops across the commodity complex — corn and wheat, as well as gold and silver. And clearly, the entire commodity complex has been in liquidation mode — a fact that lends credence to the rumors. On the other hand, it is also possible that MF Global's bankruptcy has nothing at all to do with the selloffs.

Either way, the bull case for gold (and also for silver) has little to do with short-term noise and volatility. Rather, it is the long-term story that matters most — the story of the "derangement of money and banking." And that's the kind of story that could produce another spectacular run in the Gold Price!

Maybe the last 20 years were the "glory days" for gold, never to be seen again...at least not soon. And maybe, as Mr. Mackintosh asserts, gold is no longer a reliable "crisis asset." Or maybe, as this writer suspects, the crisis is simply not bad enough to really terrify folks.