END_OF_DOCUMENT_TOKEN_TO_BE_REPLACED

Would a sovereign default be good for Gold Prices...?

Only days after EU leaders announced a "comprehensive solution" to the region's debt problems, the situation is deteriorating once again, with the dire scenario of a major default, or worse — the breakup of the Eurozone — back on the table.

Almost immediately after European policymakers agreed on a solution to the region's debt crisis, interest rates on Italian and Spanish bonds began climbing. Italian rates looked particularly concerning as they reached the highest level since early August when they hit a Euro-era record 6.4%. This is in the face of significant, ongoing purchases by the European Central Bank. 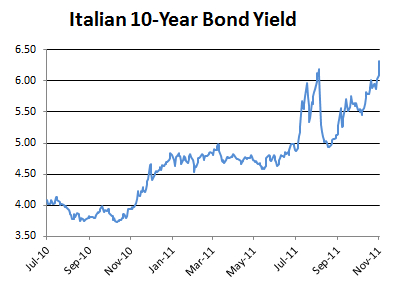 While Italy is the potential next shoe to drop, Greece returned to the headlines in a major way after Prime Minister Papandreou called for a referendum on the terms of the country's bailout that were agreed upon just last week. The agreement called for Greece's debt to be written down by 50 percent (up from 21 percent before) in exchange for more austerity measures and budget cuts.

A referendum would effectively put the decision of whether Greece accepts the latest bailout terms in the hands of Greek voters. The vote is likely to take place early next year, creating intense uncertainty in the meantime. If Greek voters reject the terms of the bailout, the country would essentially default and be forced out of the Eurozone. Such a scenario will bring into question the sustainability of the Eurozone in general and may be the first step in the breakup of the union.

These intense concerns related to Greece and Italy put the worst-case scenario of a Lehman Bros.-like shock to the financial system back on the table. In turn, we've seen risk asset prices plunge across the board, while the safest sovereign bonds in the US, Germany and the UK have rallied.

As for precious metals, their performance has been disappointing to some who had hoped the sector would benefit from these developments in Europe. In last week's edition of Precious Metals Monitor, we wrote:

"A major spike in Italian and Spanish yields will be negative for all risk assets, including precious metals. That will bring significant systemic risk back on the table. Instead, a scenario where Italian yields stay elevated but contained may be the best outcome for precious metals, as it represents a "kick the can down the road" scenario. At the same time, financial markets will remain stable, giving investors confidence to deploy capital into risk assets such as gold and silver."

Currently, we are seeing what is developing into a major spike in yields. German Chancellor Merkel and French President Sarkozy are set to meet with Greek officials on Wednesday in an effort to convince them to begin implementing the bailout terms that were agreed to at last week's EU summit. Meanwhile, the ECB continues to purchase Italian and Spanish bonds.

If these actions can stabilize sovereign bond markets, that will be a positive for risk and should allow for a rebound in gold and silver. Otherwise, a continued deterioration in Europe will likely lead to more selling in all risk assets, the precious metals duo included.

The bottom line is that a major financial shock in Europe is unlikely to boost gold or silver and indeed, will probably lead to big losses in the metals — at least in the short and medium terms.