END_OF_DOCUMENT_TOKEN_TO_BE_REPLACED

If this does turn out to be a buying opportunity, it may only be fleeting...

DESPITE a few short-term fixes, there remains no real resolution to the sovereign debt issues in many European countries. We're certainly not spending less money here in the US, and now we're bailing out Europe via currency swaps with the European Central Bank. So shouldn't Gold Prices be rising? asks Jeff Clark, senior precious metals analyst at Casey Research.

Yes, but nothing happens in a vacuum. There are some simple explanations as to why Gold Prices remain in a funk.

These forces have all acted to depress Gold Prices.

Notice I didn't say that gold has suddenly become viewed as a poor safe haven. Nor that many of the world's major currencies are no longer being debased...nor that global sovereign debt issues are resolved...nor that interest rates are positive. No, the fundamental reasons for owning gold are still intact. So don't let the selling depress you.

Let's put gold's recent price action into perspective. It peaked on September 5 last year at $1,895 (going by PM London Fix prices) and has thus been in decline for about three months. Yet look at the bull market's biggest three-month correction in relationship to the ultimate trend. 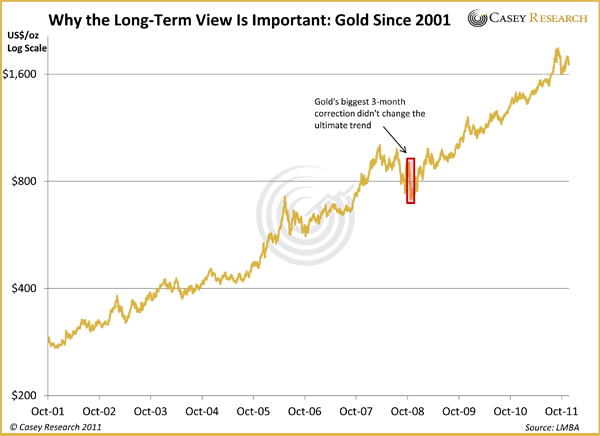 Gold Prices fell 20% from August 1 to October 31, 2008, the biggest rolling three-month decline in our current bull market. And yet, gold eventually powered much higher, in spite of many investors and industry experts thinking it had peaked at the time. The final quarter of 2011 ended down 5.5% over the previous quarter.

The point? Don't confuse short-term volatility with long-term forces. The investor who looks only at today's headlines is prone to making ill-timed decisions.

I realize that prices could trade lower – but this is why we keep a high level of cash. By the time this bull market is over, our current pullback will probably look something like the small red box in the chart above, with far higher prices in the intervening months and years.

Which makes current prices a opportunity for Buying Gold. I don't know if we're at the bottom of our recent decline or not – but I do know where gold and silver could ultimately be headed. Casey Research's Chief Economist and Editor of The Casey Report, Bud Conrad, is convinced gold will hit $2,000 in the first half of this year. If he is right, the opportunity to buy at today's levels will be fleeting.

In the meantime, stay the course with your precious metals investments, no matter how the short-term picture looks. Gold stocks remain undervalued, and these are turbulent times. They appear to be far from over. Gold remains the #1 asset protector.