END_OF_DOCUMENT_TOKEN_TO_BE_REPLACED

It's hard to miss the common uptrend the gold price shares with US debt levels...

IF YOU'VE just woken up from a ten-day coma, you might assume that nothing much happened while you were unconscious. The Dow, for example, is almost exactly where it was on August 5, writes Eric Fry for the Daily Reckoning.

But something did happen. Stocks gyrated wildly, bond yields plummeted, precious metals soared and investors around the globe scratched their heads about what to do next.

The Dow's 800-point rally has halted the widespread panic, but not eliminated the widespread anxiety. Share prices have rebounded somewhat, but fear, distrust and cynicism continue to influence the financial markets. Consider for example, that the Gold Price is still $100 higher than it was ten days ago and that US Treasury bond prices are still substantially higher as well. Despite the rallying stock market, investors continue clinging to these flight-to-safety assets.

Meanwhile, the Dollar has resumed falling, and is less than 2% away from its all-time lows.

These confusing cross-currents inspire the sorts of questions we financial market observers always love to address: "Hey, what's gonna happen next? Do you think stocks are gonna go up now? What about gold? Is gold gonna tumble now?"

We love these questions because they are absolutely unknowable (and also because we cannot answer them, one-on-one, without breaking the law [and so we don't]). Nevertheless, we have a ready answer for anyone who asks: "I think stocks are going to go up and down, but I have no idea when or by how much in either direction. Ditto for gold."

You see, dear reader, we have some answers; they just aren't good for much. But don't be dismayed; our guesses are sometimes much less worthless than our answers. So let's take a few guesses about stocks, bonds and gold...

Guess #1: The US stock market has probably made its lows for the current quarter, but probably not for the year. The recent selloff was sufficiently severe and frightening to produce the sort of capitulation that often leads to a rally of some duration. But the problems that inspired the stock market selloff have not gone away, they've just disappeared from the headlines temporarily. The dreary headlines will return...and so will the panicked selling, but maybe not for a few more weeks.

1) The global economy will sink into a deflationary abyss and that;

2) Central bankers around the world will discontinue conducting the inflationary policies – like QEI and QEII – that have become their bread and butter.

We would take the other side of both those bets. The global economy may be slowing down, perhaps dramatically, but a deflationary abyss is probably not in the cards. That's because the world's central bankers will never abandon their inflationary policies. They'll keep "dancin' with the one who brung 'em" until there ain't no more dance to be danced to.

Guess #3: Gold Prices will go up and down, but up is the trend that will matter most. Sure, the Gold Price may retreat and "consolidate" its recent charge to record highs. But so what? Gold is a volatile asset that behaves in a volatile fashion. Longer-term, this unique monetary metal seems destined to recapture an ever-more-prominent role in the global monetary system.

The reasoning is straightforward and intuitive: The US government, like most leading governments around the world, is creating an ocean of paper-based financial claims. These governments are not only swelling their money supplies, they are also swelling their debts levels...and they are doing both things at a breakneck clip. As a result, the volume of paper-based financial claims is increasing out of all proportion to underlying economic realities, like GDP growth.

The gold market has observed this institutionalized counterfeiting scheme and has rendered its judgment: A US Dollar buys only one sixth as much gold today as it did twelve years ago. Even if one uses gold's blowoff top of $850 an ounce in 1980 as the starting point, a Dollar buys half as much gold as it did thirty years ago.

No matter how you slice it, the Dollar's value is slipping. The chart below shows part of the reason why. The relationship between the Gold Price and America's runaway debt levels is hard to miss. 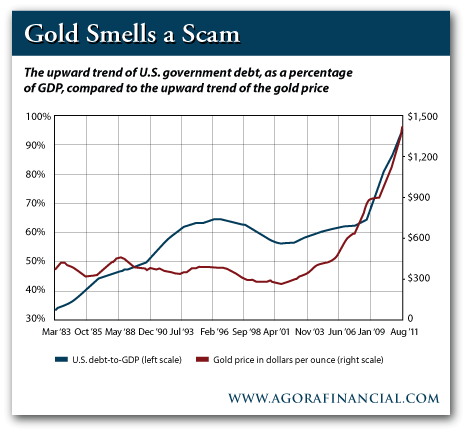 From the beginning of the 1980s through the end of the 1990s, America's debt-to-GDP ratio rarely nudged above 60%. Accordingly, the Gold Price languished around the $300-mark for most of those two decades. But once America's hellish debt levels started rocketing heavenward, the Gold Price also rocketed.

America's soaring debt load is not the only reason the Gold Price is climbing, but it's certainly one reason.

Looking to Buy Gold? Cut your costs by using BullionVault...