END_OF_DOCUMENT_TOKEN_TO_BE_REPLACED

ANALYSTS and market players are, on the whole, quite optimistic about the Gold Price, writes Andrey Dashkov of Casey Research.

On June 13, the CEO of Newmont Mining – the world's second largest world gold producer –said he expected the Gold Price to hit $1,600 this year. Not only that, he predicted it would go higher next year.

Standard & Poor's projections remain stubbornly lower, in spite of having been way off target for half the year; yet they did raise their forecast for the remainder of this year from $1,100 to $1,200 per ounce.

Here's why the analysts are upbeat.

First, there's robust jewelry and investment demand from Asia, China and India in particular. High inflation and lack of reliable alternatives to preserve wealth are directing financial flows of a burgeoning middle class into gold.

As a mental exercise, consider this: if the demand keeps growing at the same rate as it did in the first quarter of 2011, we may see overall 2011 growth at a surely market-impacting 20.9%. 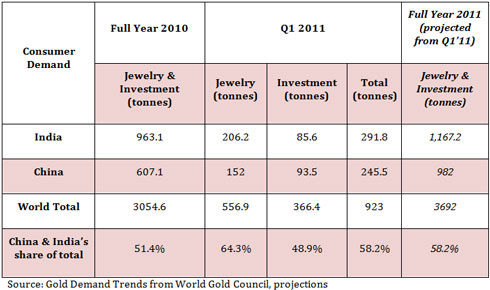 Second, investors in the United States consider gold as a safe heaven, the need for which is driven by sovereign debt crises and loose fiscal policy in the US.

"Fear trade" is still the name of the game here as risk aversion borne by the fears over Greece's default dominates global markets.

In the US, jobless claims remain high, albeit somewhat lower than their April peak, the country's current account balance demonstrates a widening deficit, and consumer confidence fell to a two-year low.

In this environment, betting on gold as a safe haven becomes the way to go. High demand for gold in Asia has roots both in culture and in the current economic conditions: inflation across developing economies and the overheating of Chinese real estate market specifically.

As Chinese authorities try to battle the real estate bubble by putting price controls on housing, the sector becomes less attractive for investment, which spurs demand for other asset classes, including gold.

European and US economies are far from overheating, as the factors we mention above constitute a rather dire economic picture. But whether fear comes from overheating or underperforming, fear drives people to gold.

Looking to get exposure to the Gold Price? Discover the safest, most cost-effective way to add gold to your portfolio with BullionVault...