END_OF_DOCUMENT_TOKEN_TO_BE_REPLACED

Is this the start or end of a drop in the Gold Price...?

OUT OF ALL my thousands of readers, writes Chris Weber in Daily Wealth, I'm very happy to say that I've gotten zero letters from people worrying, much less panicking, about the recent fallback in the Gold Price.

As of December 15, gold was at $1126 an ounce, exactly $100 below its record of two weeks earlier. By that time, gold had really begun to "go parabolic". I happened to check the spot price during the early hours of that day, and, when I saw the price at $1225, a sort of shudder, a frisson, went through me.

I've always gone by my instincts, and they have always served me well. So when I get feelings like this, I pay attention to them. And from $964 to $1226 in less than three months is a lot for a major asset to increase in just three months.

To put the recent move into perspective, here's the Gold Price over the last year: 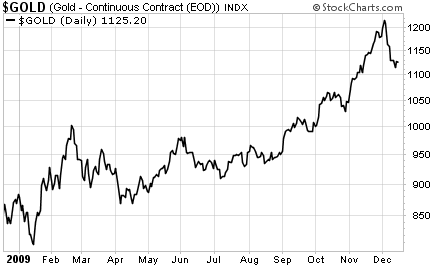 So far, as I write this, gold has gone as low as $1110. From the recent high, this is 9.46%. It could go lower. These things happen in a bull market. They serve to throw people off the bull.

Yes, gold could easily correct back below $1000 and still be in a long-term bull market. However, its pullbacks since the bull market began have been very mild, compared to the big one during the last bull market several decades ago.

Here is a 10-year chart of the Gold Price: 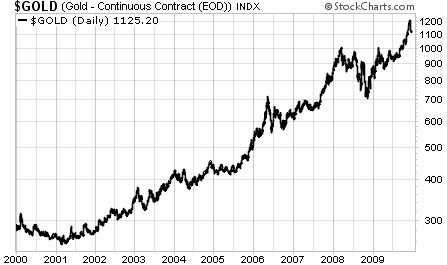 Long-time readers will remember that I expected the correction in gold that began in March 2008 – the first time it rose above $1000 – to be deeper than it actually turned out.

No one can tell in advance how long this recent loss will last. It may just be another temporary rest like the one we had last March. It may be longer and take gold back below $1,000.

My own gut feelings, which are not all that strong on this issue, are that we've already seen the gold correction that lasted from March to October 2008 and took gold down by one-third. I don't think this one will be nearly as big. It may take a few weeks or even a few months, however. The ardor of the past few weeks about the Gold Price has to cool down a bit before the next phase can begin.

To me, gold started to sprint during the last three months. And no sprinter can go on forever. He has to rest, to exhale. After that, he can continue his run. Either way, gold is finally giving people who have not bought a chance to buy.

The Gold Price may go back below $1000, but I wouldn't wait for this to happen before buying. We may have seen the lows. Trying to time purchases is not at all easy. My advice is just to take advantage of the recent near-10% discount from the peak and acquire some, if you haven't already.