END_OF_DOCUMENT_TOKEN_TO_BE_REPLACED

The Gold Price has broken through its 200-day moving average. But that doesn't mean a bear market has started...

IT GOES to show rotten sentiment has become toward precious metals when a near majority of 20 hedge fund managers say they think gold will fall to $1,450 an ounce in 2012, as the results of a Reuters poll published over the weekend show. Short term, of course, just about anything can happen, writes Gene Arensberg of GotGoldReport.

I was laughed at in New Orleans in October when I said in a panel discussion that I wouldn't be surprised if gold tested $1,250 at some point, but before I could mention the context of that idea, the discussion moved on. I expected to be challenged on that comment, but instead it was scoffed at as being ridiculous.

The point was in the event we got into another major rush to liquidity, like in 2008, I thought there could be that much volatility, depending on the degree of panic. At the time gold was near $1,700 but it had been rising up off the $1,535 test in September. Perhaps the same comment today might not be laughed at quite as hard.

The point I should have made then, in retrospect, was that if we saw enough panicky volatility to drive gold as low as $1,250 then people ought to use that opportunity wisely by converting other assets, other resources into gold.

Just for the record, calling an all-time top in gold merely because the Gold Price has crossed the 200-day moving average(as it now has, not for the first time in this bull market) is unlikely to be the correct call looking ahead. For that to be true, it has to mean that global confidence in fiat currencies (and the governments that print them) will have to be in a new bull market (global confidence in politicians to show restraint in debasing their currencies will have to be increasing), and that I view as being highly unlikely.

Indeed, I think I am on fairly solid ground in the notion that confidence in fiat currencies and in the governments that print them is much more likely to erode further looking ahead, not improve. Once it becomes crystal clear to the general public that governments have chosen to deflate their debts by massively inflating their currencies even further, there are few places for wealth to hide.

Gold and silver are two options, so, right or wrong, I want a portion of my wealth to reside in metals that can't be "printed" with a computer keystroke at the US Fed, the ECB, the BoJ, the...you get the idea.

It's a shame that the Reuters article, misrepresents Mr. Gartman's stance on gold. By clipping Gartman's quote he gives the opposite view of Gartman's longer term views on the metal in my opinion.

So, is it time to move to the "other side of the boat" as you mentioned? Perhaps, but I would feel more comfortable doing so if gold manages to almost retest the Sept lows ($1,530s), but then holds firm and shows us a sign of strength then. Absent a global collapse of the banking system, absent a world devolving into chaos, we can expect the central planning politicians and central bankers to continue to do exactly what has caused the value destruction for fiat currencies up to now. The problem is that they sincerely believe the answer is more of the same medicine, just in different bottles and larger doses. And that is the kind of thinking that gives us unshakable confidence in precious metals looking longer term.

Expect higher volatility ahead, but don't be frightened by it, if possible, is our view. 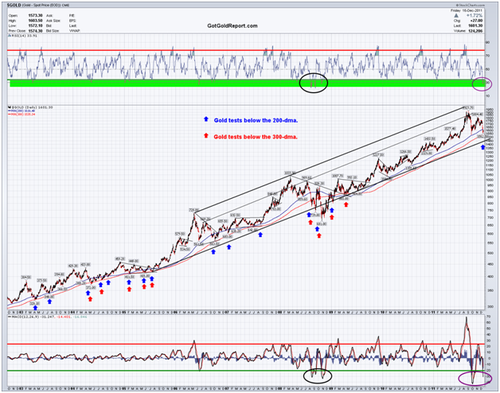 We can recall numerous times when the Gold Price fell below its 200-dma hearing that the gold bull market was then over. Indeed with a bit more effort than we want to tackle while on vacation, we could easily dredge up some of those big gold bear calls from the past. (Especially the 2006 parabolic break, the 2008 panic collapse, and in the April 2009 correction.)

Instead of dragging out those past bearish calls by the gold bearish camp, however, we are going to quietly get back to our holiday vacationing. We suppose this could be the beginning of a protracted gold bear market. It could be in the sense that anything is possible, but it won't be merely because gold has crossed a moving average line it has crossed 15 times before.

Come to think of it, the gold market has not respected the 200-dma all that well since Day One. It has routinely made fools of those who mechanically trade via moving averages and so-called "death crosses" in the decade prior. Why on earth we should start thinking it will respect them now, is ... well, it's just kind of a "cry-wolf" kind of thing, is it not?

Oh sure, some day the wolf will actually come and end up eating the sheep of the people who become complacent, but we'd wager that day is a long way off and most likely won't arrive until sentiment for gold is very strongly bullish, not sickly and fearful as it is today.