END_OF_DOCUMENT_TOKEN_TO_BE_REPLACED

Gold and Treasury bonds have broken apart this week...

THAT'S ODD. The Dow Jones Industrial Average soared 162 points on Wednesday. It shot up again yesterday too. I wonder why, muses Eric Fry in the Daily Reckoning.

Was it because Consumer Confidence for October plummeted from 46.0 to 39.8...or was it because the number of Americans who signed contracts to buy homes fell for the third straight month? 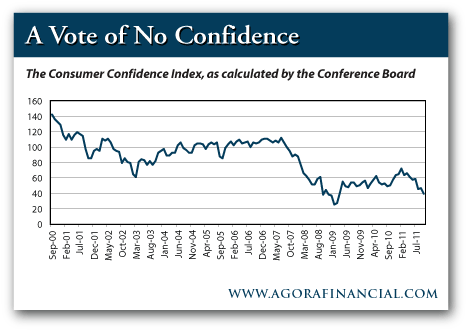 Neither, according to the newswires. The market is rallying because the deadlocked Euro rescue plan became UN-deadlocked. Adding to the euphoria was a rumor that the Chinese would buy some of the European debt that would finance the rescue.

"After more than eight hours of hard-nosed talks between European heads of state, the International Monetary Fund and bankers," the Associated Press reports, "the [rescue] deal foresees a recapitalization of hard-hit European lenders and a leveraging of the bloc's rescue fund to give it firepower of 1.0 trillion Euros ($1.4 trillion)."

This news kicked off a monstrous rally in Europe that vaulted most of the major stock indices 5% to 6% higher. We Yankees joined the celebration by bidding our homegrown stocks higher as well.

So for the moment, investing is fun again. But as your editor's mother used to say, "It's all fun and games until someone gets hurt."

The knee-jerk rally is fun indeed. But we've seen this show before...or at least a version of it.

The European summit was the 14th such powwow in the last 21 months. And nearly all of them produced some kind of "breakthrough agreement" that thrilled investors for a day or two. But each of these relief rallies proved fleeting, as the "breakthroughs" yielded to deadlocks and bickering about the details of the supposed breakthrough.

This time around may be different...but it may not. For starters, the breakthrough arrived only after German Chancellor Angela and French President Nicolas Sarkozy coerced European banks into accepting a "voluntary" 50% haircut on their Greek bond positions.

Around midnight in Europe, the European Banks' representative at the summit, Charles Dallara, fired off an email stating categorically, "There is no agreement on any element of a deal." But shortly thereafter, according to the AP, "Sarkozy said the bankers were escorted in 'not to negotiate, but to inform them on decisions taken by the 17 and then they themselves went on to think and work on it.' Luxembourg Prime Minister Jean-Claude Juncker said the banks' resistance was broken by a threat 'to move toward a scenario of total insolvency of Greece, which would have cost states a lot of money and which would have ruined the banks.'

Armed with this "voluntary" agreement, the rescue plan was good to go...and the markets were sprung to rally. So for now, it's all smiles and high-fives.

Whatever the actual prospects for an enduring rescue package — "enduring" being something longer than a week — investors are growing tired of fear. So they are shifting into "risk-on" mode. Treasuries are selling off; the Dollar is dropping; stocks are rallying. This is classic "risk-on" trading action — meaning that market participants are becoming slightly less skittish and slightly more eager to take some chances.

But here's a curious data point: During the most recent phase of the risk-on trade, gold has also rallied. In so doing, gold has broken ranks with its "risk-off" companion: Treasury bonds.

Ever since the credit crisis of 2008, investors have flocked to both gold and Treasurys whenever macroeconomic conditions started looking a little dicey — i.e., "risk off." As such, both assets tended to rise or fall at the same time. But during the last few weeks, when the risk-on trade was gaining traction once again, gold also rallied. Treasurys did not. Something has changed here. We're not sure what it is but, as usual, we have a guess. 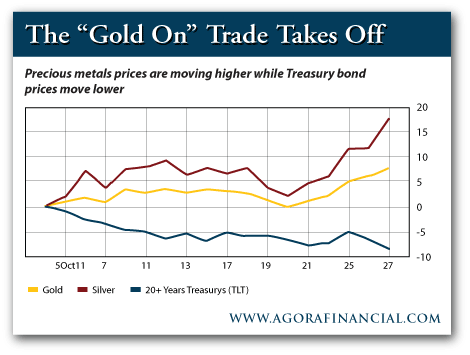 But after the credit crisis of 2008 — when neither deflation nor inflation were the anxiety du jour — these two asset classes started tracking each other much more closely than usual. They became "flight-to-safety" assets, more than anything else. While very dissimilar, both assets satisfied a particular appetite for risk aversion — much the same way that Eggs Benedict and a bran muffin, though different, both satisfy an appetite for breakfast.

In other words, either the governments of Europe rescue the Euro with a massive inflationary effort or they fail, in which case the Euro breaks apart and the most reliable money around would becomes the ancient money: gold.

Buying Gold? Discover how BullionVault could dramatically reduce the price you pay...