END_OF_DOCUMENT_TOKEN_TO_BE_REPLACED

Just how low could the Gold Price fall and still remain a bull market...?

We don't mean to frighten you, writes Addison Wiggin in Baltimore, Maryland for The Daily Reckoning. But an influential gentleman whose opinion we respect thinks the Gold Price might end up going much lower.

But hey, it's not that he's selling.

Gold traded as low as $1532 per ounce this week before recovering above $1600. That's still a $50 loss tacked onto Friday's $100 loss. Even examining the action in the context of a one-year chart, it looks dramatic... 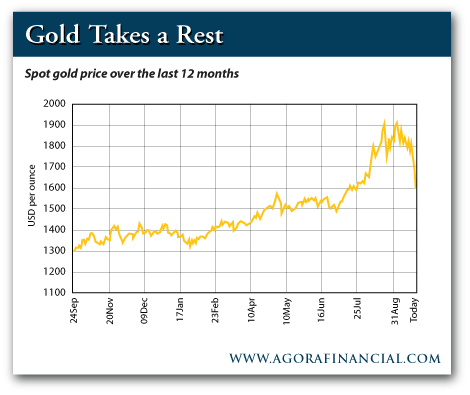 As of this week, people who want to trade gold on the Comex Gold Futures market once again have to post additional margin to their accounts. Fueling last Friday's drop was an announcement by Comex parent CME Group that its gold margins were rising 21%. In addition, silver margins were raised 18% and copper, 16%.

So an initial position on a 100-ounce gold contract will cost $11,475 up front. This is the third margin increase for gold since August. Put together, the increases have totaled 55%.

And then? The Shanghai Gold Exchange followed the US Comex's lead and raised margin requirements on its precious metals contracts.

"Even with the recent correction," comments Byron King, "gold is still priced within its long-term trading range" – as evidenced by this chart: 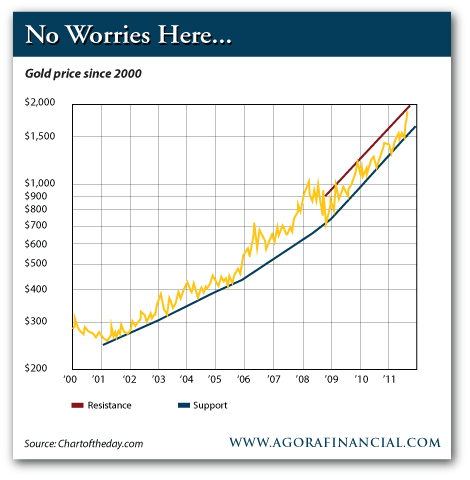 Even back down at $1500, gold would remain within the "channel" that's been in place for nearly three years.

"We overshot on the upside when we went over $1900," veteran investor Marc Faber told CNBC this week. "We're now close to bottoming at $1500" – the bottom of the aforementioned channel, as it turns out.

Not that Faber is worried. He's been buying in since...well, probably around the same time we recommended our Trade of the Decade at the start of 2000, when gold was near $300. So here's a little historical perspective:

"With history as our guide," says Matt Insley at Daily Resource Hunter, "it's clear that gold's been doing this sort of thing all along its massive run-up – since 2005 it's seen five similar corrections."

So what now? Are we in line for another $29% drop...which would take us to $1350? Or something steeper, as Marc Faber warns about? Will it take another 18 months for gold to reclaim the old highs and break through $1900?

The good news, I believe, is that you don't have to know the answers to these questions to continue feeling confident about holding gold. "Nothing has changed since last week in the physical gold market," Mr. Insley continues. "There wasn't a mother lode discovery, and there's clearly no substitute. So other than a market correction, gold is still high on our list of investable resources."

"I'd buy every month a little bit of gold," Faber advised back on Sept. 6, when gold was at its (for now) all-time high of $1921. "When you Buy Gold, it's an insurance against systematic failure and problems in the financial markets."