END_OF_DOCUMENT_TOKEN_TO_BE_REPLACED

Volatility – in the Gold Price and everything else – is the price of being in the markets right now...

WE CAN NOW measure the instability of the global financial system in hours and minutes instead of weeks and days, writes Dan Denning, editor of the Daily Reckoning Australia.

Corrections that used to play out over days or even a few weeks are now happening in a matter of hours. The price for being in this market right now is volatility.

But if you let the volatility panic you, you're likely to make a big mistake and sell when everyone else is selling – exactly the worst moment to do so. So let's take a step back from yesterday's manic market and look at the big picture.

The performance of most asset classes has been tightly correlated since 2003. Stocks, bonds, and commodities (along with real estate) all moved higher thanks to the global credit bubble. That credit bubble took different forms in China (real estate and stocks), America (stocks and real estate), and Europe (government debt). But the underlying causes were the same.

What you're seeing now is the de-correlation of asset classes. Everyone is scrambling to get to cash out of fear. Europe's slow-motion currency collapse is the immediate fear. But you could add plenty of things to the list. In the race to cash – mostly US Dollar cash – everything is being sold at the same time (except US bonds, which are, perverse as it is to say, being bought as a kind of short-term substitute for Dollars).

That selling hit a peak in the gold market on Monday. Gold fell nearly $100 at one point, and traded as low as $1535. It's down around 9% in the last month and off 16% from its high. We'll show you three charts that should put that decline in perspective.

First, check out the "V" pattern on the charts below. The charts show the Gold Price in US and Australian Dollars and the silver price in US Dollars. We've seen this V chart most recently in March 2009. It's an intra-day pattern that shows up when markets make a capitulation low. What does that mean? Read on...

This will be cold comfort to you if you're new to gold and staring with horror at the charts above. But it's important. This is how markets work psychologically. They test you. They go from oversold to overbought and back again. Rising prices attract new buyers who then get smashed in corrections. These corrections test your resolve.

We should have known something was up with gold when the Australian Financial Review published an advertisement promising "60 pieces of gold" to a contest winner. Any time it's safe enough to run a bullish ad in a mainstream paper, an investment idea is probably short-term overbought. But this is just a trading observation. We'll make a more fundamental observation in a moment.

From a trader's perspective, the intra-day low on US gold saw the price decline to within a whisker of its 200-day moving average (the red line on the chart below). That's where the "V" reversal kicked in. The relative strength index (RSI) is also near 30, suggesting gold is oversold. The last time it was that low on gold, the metal put on about $400. 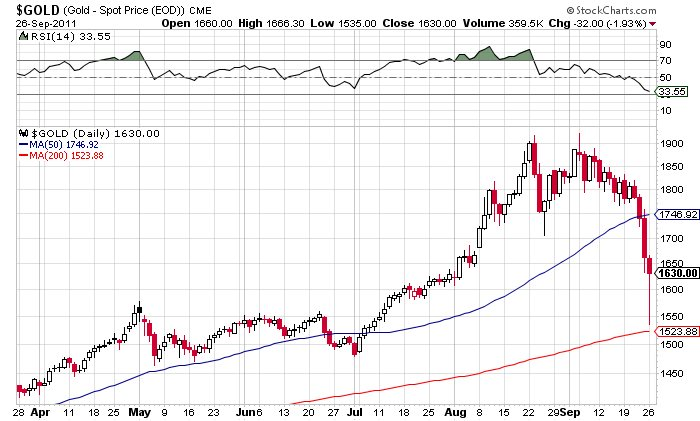 We're not suggesting gold is about to rocket right back up where it was a few weeks ago – although on a Greek default we wouldn't rule that out. But we ARE suggesting that precious metals are your best refuge against monetary instability. We see a lot more of that coming down the pike. The next stage in this crisis – after widespread asset deflation – is humongous central bank stimulus. Trillions in Fed and ECB asset purchases are now on the horizon. Cramming into "safe havens" like financial stocks or AAA rated bonds before a massive central bank intervention is taking your financial life in your own hands.

The chart below shows gold's performance over the course of its 11-year bull market. The last time gold traded so far above its 50-day and 200-day moving averages was in 2008. Between March of 2008 and November of 2008, the Gold Price shed nearly 30%. When the monetary experimenting began with Quantitative Easing, you can see what happened. The decline was an ideal place to enter into a position for those that hadn't already. 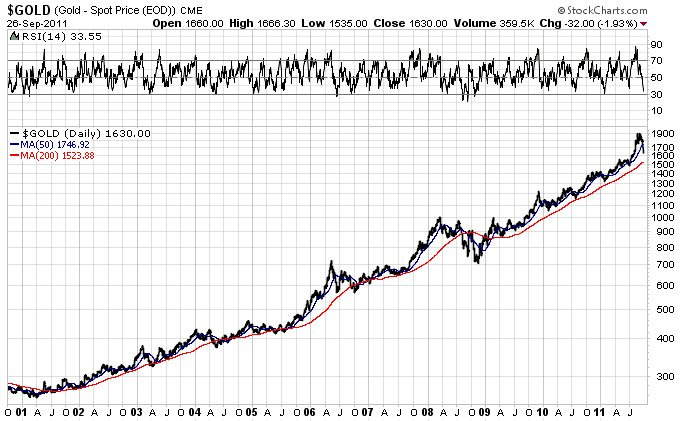 The scariest idea of all from the last month is that there is not always an ideal asset class to be in to protect you from the risks of the market. Not even a perfect asset allocation strategy can perfectly hedge you from an unstable financial system.

But panic is not a good strategy. You should have a plan.

Find out how you can Buy Gold at the lowest possible prices...