END_OF_DOCUMENT_TOKEN_TO_BE_REPLACED

"A 10% correction in the Gold Price is a non-event," says one leading gold fund manager...

AS MY 8-year-old says after a good tumble: "We're okay," writes Addison Wiggin, reporting for The Daily Reckoning from Baltimore, Maryland.

The 3rd floor of 808 St. Paul St. shook during the quake. The floor felt like it was floating on water for about 30 seconds. The light fixtures hanging from our ceiling swayed about a foot in either direction.

In the next room, via a concurrent Skype conversation with a colleague in Philadelphia, we witnessed the quake ripple its way up the coastline. For a while, there were rumors the Washington Monument was starting to tilt 30 miles to our south.

We were looking forward to sharing analogies between the national US debt debate and the great East Coast Quake of 2011. Alas, the structure is sound, but for a crack inspectors did find at the very top. Still, the last time a bigger quake was registered in the mid-Atlantic was 1944. And you might be forgiven for thinking the quake did far more serious damage to the Gold Price.

The Gold Price had already drifted down from $1,900 in overnight trading Tuesday, and then staged a brief rally that vaporized within moments of the quake at 1:51 pm EDT on Wednesday.

It dropped $40 in the following two hours, and the thumping continued through Thursday. At last check, gold was down to $1,780 per ounce. But that's still a level unseen before this month.

Among the contributing factors? The Shanghai Gold Exchange raised traders' margin requirements, hiking the cost of Gold Futures contracts. The Comex here in the United States followed suit. Still, whoever thought $1780 gold would be a chance to buy on the dip?

"Gold is due for a correction," wrote U.S. Global Investors chief and Vancouver favorite Frank Holmes on Tuesday. "In fact, it would be a non-event to see a 10% drop in gold." Commenting on the long-term trend, however, Frank figures we're only two years into a long cycle in which gold will run ahead of the S&P 500. 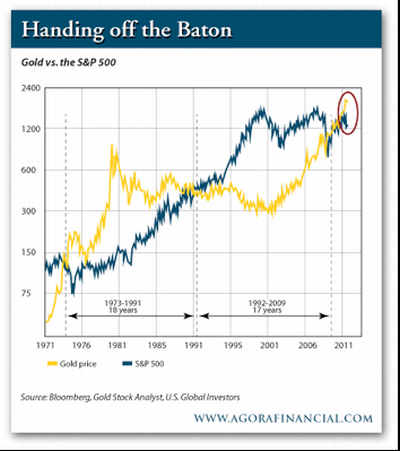 "This chart from Gold Stock Analyst," says Frank, "pits the performance of Gold bullion against the S&P 500 since 1971 – you can see that gold immediately rallied following Nixon's announcement [cutting the Dollar's last tie to gold] before peaking at $850 an ounce in 1980.

"What drove gold's relative underperformance from 1980 to 1999?" Frank goes on. "It was a shift in government policies, which have historically been precursors to change."

In this case, it was Fed chief Paul Volcker's pursuit of positive real interest rates...where money you tuck away in a Treasury note or a CD will earn you more than you lose in inflation. Whereas now? As we've talked about before here at The Daily Reckoning, we're in an environment of "financial repression" – where interest rates get eaten up by the cost of living, and then some. That's bullish for gold.

Ready to Buy Gold? "If there's an easier way, I've yet to find it," says one BullionVault user...