END_OF_DOCUMENT_TOKEN_TO_BE_REPLACED

The Greek crisis is part of a worldwide picture...

THERE ARE some investors who may feel that the Eurozone debt crisis has been resolved by Greece's bailout by other members. But what does it mean for the Gold Price? asks Julian Phillips of GoldForecaster.com.

There are still hurdles in the way, such as the acceptance by private Greek Bondholders of the 53% haircut and low interest rates they will get until 2015. But let's assume the best and believe they'll accept the terms.

The first market reactions were to move up and hold new levels without any effervescence in any market. The moves had largely been discounted already. Yes, we're seeing a shift of money from the US Treasury market to the Euro but not in large amounts yet.

One can spin the story any which way, but the cold reality is as follows:

Portugal, Spain and Italy remain possibly in need of a bailout too. Their plight confirms that the debt crisis of the EU remains intact. There is little hope of better times!

What the EU needs now is to see a significant leap in government revenues in these weaker nations. That is not on the horizon of the EU!

With the Greek bailout now confirmed, we may see a rise in interbank liquidity and a pick-up in money velocity with it even reaching as far out as the capillaries of the business body. But do we expect growth to jump, which it needs to, if the debt crisis is to be contained let alone resolved? It will take Asian style growth (or heavy inflation) to make developed world debt drop to "comfortable levels" as a percentage of GDP.

The developed world markets dictate the day-to-day moves of the gold and Silver Prices because these are the centers for supply and demand. The rest of the world has to come to these markets for the best prices, the most liquid markets, and to be able to source and sell the largest quantities of precious metals in the world. This will not change for a very long time.

Yes, China as it develops its own markets, may come to share or even dominate precious metal markets as it will provide the greatest demand levels. Even though they're the largest gold producer in the world right now, we don't say supply levels because most if not all of its supply does not reach the open market. (We're of the opinion that Chinese gold production will end up in the government's reserves.)

Therefore the quickest short-term response to the seeming resolution of the Greek debt crisis will be seen in the developed world's precious metal markets, particularly at the London Gold Fix. We've seen the instant response, to take prices only slightly higher, initially.

The net result is that developed world markets can shove prices backwards and forwards in the very short-term but are subject to emerging world demand pressure over the longer term. These will dominate the trend.

The second major price factor on longer-term prices that dominates short-term prices is demand from the emerging world's central banks. The recent report from the World Gold Council confirms that central bank demand equals the supply, which the developed world central banks gave at their peak levels when they were selling gold. So the turnaround from around 450 tonnes supply is now around 450 tonnes of demand. That's a major structural change in the dynamics of the gold market.

Indeed, the lesson we take from the debt crises on both sides of the Atlantic is that we would be foolish to ignore history and the way it is being expressed now, in the debt crises, when contemplating currency investments long-term.

Gold has become a far more respected investment than it has been for more than 40 years right now. We're seeing it pull countries like Iran, Sudan, and (behind the scenes) some European nation out of a mess, as it facilitates international loans and lowers interest rates. It is allowing international trade when nations cannot do so because of their current situation. This confirms its direction in the future; it also confirms its important role in the future of the global monetary system. 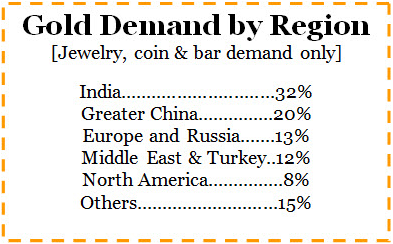 Why else are Russia and China accumulating larger and larger reserves? Why are so many nations from the Far East to central Asia to South America and so on, slowly and steadily Buying Gold?

When we look ahead some years from now, we do see a very different shape to the world than at present. East will be as, if not more, wealthy. Political divisions will have increased as emerging nations refuse to bow to the dictates of the developed world. The developed world will have lost its dominant position.

In such a world financial changes, stresses, and patterns of trade will demand a move from trust in one dominant nation's currency to an acceptance of many, some of which will be new. The change will force the older currencies so long over-issued, to face that reality. Preference in foreign exchange reserves will reflect the new dominant realities of international trade. This will mean selling currencies like the Yen, the Dollar, the Pound, etc. Such structural changes will bring about crises of values, and we will see currency crises the like of which we have never seen.

Gold will remain the backstop currency. It will always inspire confidence in its value. Its role in foreign exchange reserves will increase in line with its global acceptance. The campaign by governments against gold, as part of the system will be long forgotten, and a resurrection of its past respect will come naturally.

Seen in that context, the issue of Greece can be seen in its proper perspective. The Greek debt crisis is a symptom of a longer-term, larger problem of government-controlled, government dependent, government valued instruments of exchange with no inherent value. Seen in that light, we cannot see how currencies alone in such a changing world can do without the backing of gold, to ease the strains of commerce, banking and most important of all, value measurement.

Gold will not replace currencies in the current monetary system, but it can and will support them. Consequently we do not see gold or silver falling on this news...but rising!