END_OF_DOCUMENT_TOKEN_TO_BE_REPLACED

Gold doesn't just signal a sharp drop in the Dollar...

GOLD HIT YET another new record yesterday, writes Bill Bonner in his Daily Reckoning. The price rose $22.50 to $1,139 an ounce.

So today we take up a foul and disagreeable task. We ask ourselves: what if we are wrong?

If you chose to Buy Gold when we first recommended it, ten years ago, you are now in a very comfortable position. Gold sells for more than four times as much today.

But what should you do now? And what if you didn't go for broke on gold in the early '00s? Is it too late to get in on the bull market?

To give you fair warning, in the following windy ambulation we come to no conclusion we haven't come to before. We say gold is going to the moon. If we are wrong about when...we will be delighted sooner than expected...self-satisfied...and insufferable for years. If we are right, we may have to wait a long time before saying "I told you so."

First, the press has certainly noticed the bull market in gold. How could it not? Most reporters say gold is going up simply because the Dollar is going down. In the popular press, we found no other explanation. In fact, much of the notice of gold seems to occur within articles about the Dollar. We found, for example, that the Dollar is at a 15-month low...and, coincidentally, gold has just hit an all-time high.

There's something lopsided about this account of things. If the yellow metal has hit a record high, how come the Dollar is down for only 15 months and not since the Flood? Makes you wonder if the Dollar isn't the whole story.

Elsewhere, we find that the Dollar is trading at $1.49 per Euro. Wait a minute. We remember the Dollar at the exact same level...was it a year ago...more? And it's been at that same level, more or less, all the while gold has gone up more than 10%.

It's not the fall of the Dollar that is driving the Gold Market, in other words; it's something else – the fall of ALL paper currencies. For when the Dollar goes down, so do the rest of them - more or less. No nation wants its currency to rise too much against the greenback. Americans are still the world's biggest spenders. They spend Dollars...not Roubles...not Euros...not Zloties. A nation whose currency rises against the Dollar is in a competitively weaker position. Its costs – in local currency – go up while its sales – in Dollars – go down. It has to charge higher prices.

Typically, central banks buy up Dollars with money created for that purpose...thus increasing their own money supply and thus decreasing the value of their own local currencies relative to the Dollar. Since all the world's central banks, more or less, are doing this, all paper currencies are going down together – compared to gold.

But wait, wouldn't they be going down together against everything else too? If currencies are getting weaker...shouldn't they be getting weaker against oil...and McDonalds' hamburgers...and woolen underwear? The oil price is at $78 per barrel, where it's been stuck for a while. Oil is a special case, but almost all consumer prices are stuck too. Take out energy and food, and consumer prices are deflating in the US. Put back in the energy and food and they're just stuck. There is no sign of generalized consumer inflation – not in the USA and not in Europe either.

The only thing that is going up is gold. There is a bull market in gold and gold alone. But why?

According to the law of supply and demand, you expect the price of a thing to fall when its supply increases faster than the demand for it. In today's news are two reports on Gold Mining production. One, from South Africa, tells that a scientist says the nation's residual gold in-the- ground is much less than expected. It has been overstated by 900%, he says. Another report shows the output of from the Gold Mining industry clearly topping out. Gold supply, in other words, is increasing, but not as fast as it used to.

The supply of paper money, on the other hand, needs no new discoveries. Since there have been huge increases in the monetary base of paper money all over the world, it is reasonable to expect the price of paper money to go down. Gold, traditionally the thing that paper money is priced in, should go up. Speculators are buying it now in anticipation. Even central banks are buying again. And nearly everyone expects the price to continue going up.

As near as we can tell, gold is properly priced already. Comparisons are rough, but an ounce of it appears to buy about as much stuff as it did 2,000 years ago. You can buy a suit of clothes for an ounce of gold – no problem. Go to Wal-Mart; you can buy four suits.

As Roy W. Jastram wrote in his 1977 book, The Golden Constant, gold's "price has been remarkably similar for centuries at a time. Its purchasing power in the middle of the twentieth century was very nearly the same as in the midst of the seventeenth century."

Gold...or the people who speculate in it...may be looking ahead. Or, they are dreaming. If gold is already about where it should be, why would you pay more? You must expect paper currencies to go down...to buy less stuff. In other words, you'd have to be anticipating a fall-off in the value of the paper currency.

It may come to pass exactly as they imagine it. Gold may rise and rise and rise...as paper currencies fall and fall and fall some more. In that case, we here at The Daily Reckoning headquarters as well as all of our dear readers who followed our advice 10 years ago will be delighted.

But there is almost always more under Heaven than speculators think. When we look into it, we see gaudy increases in the monetary base...but only very modest increases in M2, the money that buys stuff. What's more the rate of increase for M2 has fallen in half over the last 8 months. It's now only about 7% annually in the United States. And when we look at the Consumer Price Index we see no increase at all. And despite the 'recovery', unemployment is still rising and house prices are still falling. So, if speculators see the price of stuff going up in paper currency terms, they must be looking way over our heads.

To more fully describe our own state of mind, we don't doubt that all the liquidity added to the world's monetary system will eventually be soaked up by paper currencies. But it could take a long time; we might be dead before it actually happens.

But since we are entertaining the possibility that we might be wrong; let us look at what is going on in more detail. If there were a real recovery – as announced in the world's newspapers and proclaimed by its stock markets – you'd expect a rising increase in demand...leading to higher prices...leading to a higher Gold Price.

Monday's news brought word of greater US retail spending than anticipated. This was greeted as more evidence that a recovery is actually underway. But upon examination, we discover that the evidence comes almost all from auto sales. We also find that the number crunchers contributed to the lift by revising figures for September. These are month to month movement numbers. So you can raise October's number simply by lowering the number for September.

What's more, while sales went up...car prices actually went down in paper Dollar terms. This doesn't sound inflationary to us.

And then there's the news from GM. The giant, government-owned auto company says it will repay its loans from the feds earlier than expected. But wait...we also find that the company continues to lose money. How then will it repay debt? Perhaps by refinancing!

Other reports are similarly confusing and inconclusive. Profits are up on Wall Street. But wait...sales are down. You can increase profits by cutting expenses (getting rid of employees, mainly). But you can't increase sales. And as long as sales are falling you have to expect lower profits in the future. (Stock market buyers...take note.)

Our colleagues over at The 5-Min. Forecast sent through this chart, illustrating the "recovery that wasn't." 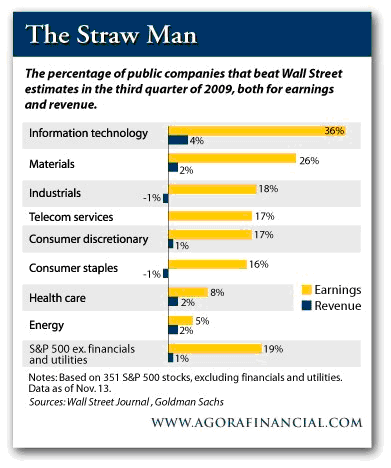 "Of what little we recall from freshman year, Finance 101 insists that profit equals revenue minus costs. Thus there really can't be any questions left as to how the market pulled off this quarter...companies are simply trimming the fat at an incredible clip. Not exactly a long- term plan for growth."

The New York Times reports that job losses continue to be "deep and enduring". Mortgage applications are running lower than they were 9 years ago. "More households report food shortages," says a Wall Street Journal headline. And insiders are still selling their own companies.

So, it still looks to us as if we are in a depression...one that will take many years to sort out. It is unlikely that the bull market in gold will reach its final blow-off top while the depression continues. But stranger things have happened. Eventually, gold will reach the apogee of its bull market. And when it does, we want to be ready for it. We will celebrate with champagne and sparklers.

Still, we wouldn't get out the party hats...not just yet.