END_OF_DOCUMENT_TOKEN_TO_BE_REPLACED

The sharp drop in Gold doesn't say anything about the bigger picture. Not yet...

IT'S IRONIC, in a way, that a metal which depends so much on uncertainty and fear can itself be undone by doubt, notes Brad Zigler at Hard Assets Investor.

Much of gold's buoyancy stems from its utility as a hedge against losses elsewhere. Classically, we've been taught that the metal hedges inflation. Which in a broad sense, it does. But only in a very broad sense. We've all seen, by now, what CPI adjustment would do to the price of gold, and it still lags its one-day peak of Jan. 1980 by almost 50%.

Gold is in fact much better at hedging uncertainty. When faith in the status quo – denominated in greenbacks, Pound sterling or Icelandic Krona – evaporates, capital typically flows into gold. Keeping a gold hoard is the financial equivalent of keeping your corn crib dry.

The recent sell-off in gold has spooked some gold investors, however. A lot of money flowed to the Dollar after November's better-than-expected US employment figures were released. The Johnny-come-lately and leveraged goldies were quickest to bail. No doubt, too, the gold market was ripe for a correction. It was just too one-sided.

In fact, it still is on my reading. At last look, 97% of gold positions held by money managers were long, down from 99%. That's a very one-sided bet, at least amongst hedge funds and other leveraged traders.

But should gold investors worry that the metal's long-term trajectory has reversed? In a word, no. Not yet. The fundamentals that underpinned gold's rally haven't changed, so spot gold's secular bull is still very far away from the slaughterhouse floor.

Technically, the uptrend that began in 2001 really won't be threatened until metal prices breach the $741 level. That's cold comfort if you bought gold at $1100 of course. But suffice it to say that, right now, worry might be justified if you're a gold trader with shorter time and money management horizons. 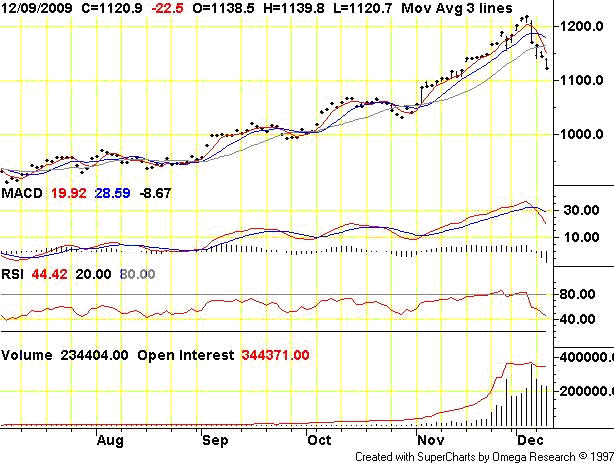 The February Comex contract is currently working the lower half of its volatility band. Today, the bottom of the band's at $1097.

There is some good news for the chart-minded, meantime. The mid-November price gap between $1117 and $1130 has finally been filled. Today, traders will be watching closely to see if that area develops as a base of price support.

As far as the intermediate trend is concerned – that is, the July-December rally – a correction as deep as $1030 could be survived today and still the trend would remain intact.

Brakes should squeal, however, at the intervening levels of $1106 and $1068. Which ought to make even the shortest-term trade feel better about this week's drop.