END_OF_DOCUMENT_TOKEN_TO_BE_REPLACED

The ratio of Gold Prices to crude oil has fallen sharply in the last two months...

WITH ALL THE HOOPLA in the financial markets centered on the price of oil futures recently, investors looking to Buy Gold are feeling a little pushed out of shape, writes Brad Zigler of Hard Assets Investor – or at least, pushed out of the limelight.

Near-term weakness in the Gold Price, of course, hasn't helped. The metal fared well in the last week's late trade, but that was consolidation after the sell-off which was, in itself, a continuation of the two-month slide in bullion prices.

Not to worry, though. There'll soon be plenty of green to be made from gold, according to some stalwarts. And a lot of this half-glass-full jawboning is centered on the Gold/Oil Ratio, a quotient expressing gold in terms of the quantity of oil it can purchase.

The call for a rally in the yellow metal presently ensues because the Gold-Oil Ratio has sunk well below its historic range of 12-to-1. Now at 7-to-1, one pundit claims "the [ratio] is now down in the area near the ridiculous 2005 bottom."

Ridiculous? Well, I guess in hindsight it seems so. We all know what happened to gold prices after 2005. But is that reason enough to Buy Gold now? 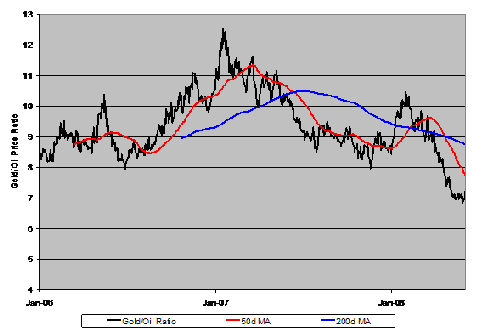 Other ratios that some gold analysts watch are also due to put in bottoms, too, according to price-chart technicians.

The traditional Gold/Silver Ratio – which has been pretty much locked at 52-to-1 since the St. Patrick's Day break – is also due for a pop, these technical analysts claim. The decline in gold to Wednesday last week, when pitted against the 3% slippage in silver's price, nudged the ratio nearly a half-point higher.

A harbinger of future moves? Given the sharp recovery in Gold Prices as crude oil leapt late in the week, we'll have to wait and see. The Gold:Oil Ratio, as well as the Gold/Silver Ratio, may point to latent strength gathering in the bullion market. But another quotient seems to say the metal is already doing fine, thank you very much.

That's the ratio of Gold against gold mining stocks.

Take a price ratio gauging the SPDR Gold Trust versus the Market Vectors Gold Miners ETF, for instance. It shows bullion still holding on to an advantage that's stair-stepped higher over the past six months. Unless you're spreading the two ETFs against one another, however, there's been cold comfort in this escalating ratio given the recent downward trajectory of both assets. 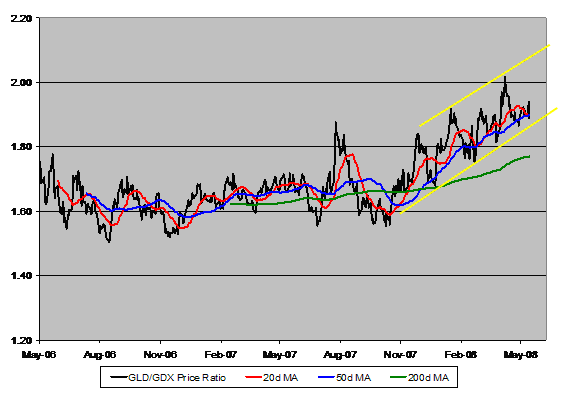 Seeing this strength in Gold vs. the gold miners traded on the North American stock exchanges right now, it seems a little early yet to declare a sharp turnaround in gold bullion's fortunes.

Those half-full glasses, in fact, may have to be drained before the bulls stand up for the next round.