END_OF_DOCUMENT_TOKEN_TO_BE_REPLACED

Gold is becoming more "expensive", while oil is relatively cheap...

CAN THE RELATIONSHIP between gold and oil, two traditional bellwethers of inflation, give us any clues about our future economic prospects? asks Brad Zigler at Hard Assets Investor.

What drives the gold/oil ratio exactly?

Just as sailors and aviators rely upon thermometers, barometers and other gauges to plot their courses, investors use indicators of their own to map the economic landscape. mong them is the gold/oil ratio...the price of one ounce of gold, as measured in barrels of oil.

When taken separately, oil and gold can tip you to certain goings-on in the economy. Oil tends to become more expensive when gross domestic product is on the rise, and gold turns bullish when the greenback falters.

But what about gold's relationship to oil? Can this gold/oil ratio tell us anything about our current economic prospects?

Expressed mathematically as the per-ounce price of gold divided by the cost of a barrel of crude oil, the ratio tells you how many ounces of gold it takes to buy a barrel of oil. And even though oil and gold are thought to be bellwethers of inflation, their price movements aren't in lockstep.

Since the 2001 launch of the current bull cycle, the correlation between US benchmark West Texas Intermediate (WTI) crude oil and the London morning gold fix is only 23%. In fact, it's the lack of a tight correlation that makes the gold/oil ratio meaningful. 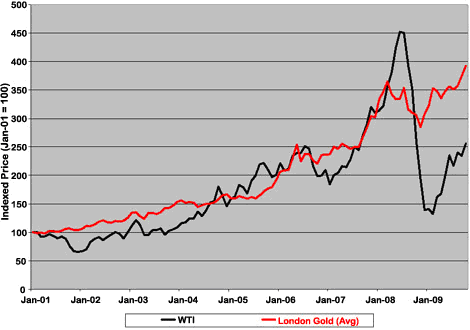 The gold-oil ratio can vary widely over time. Since 2001, one ounce of gold could have bought between 6 and 24 barrels of oil. In mid-year 2008, as oil prices surged, gold scraped a historic low at a 6x multiple (a 6-to-1 ratio).

A half year later, the ratio had rocketed to the 24x level after massive deleveraging sent oil prices down $100 a barrel but Gold Prices held their own in the post-Lehmans' deflationary slump.

Over the longer term – say, the past four decades – the average multiple for the gold / oil ratio has been 15 times. Keep that figure in mind. We'll come back to it in a moment.

With a little bit of hindsight, we may be able to parse a rationale for such dramatic shifts in the ratio, which in turn may help us determine if the ratio is in any way useful as an economic indicator. Given the fact that the gold/oil ratio just crossed above its 200-day moving average for the first time since mid-2008, this is a very timely consideration. 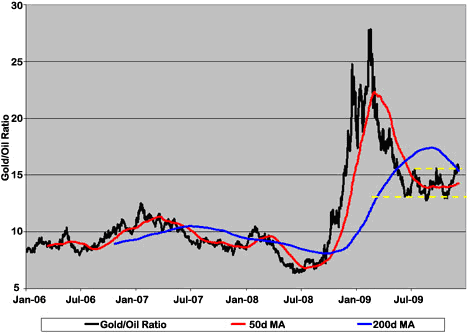 In general, Gold Prices rise most steeply when investors hoard metal in anticipation of some economic depredation, such as inflation, currency depreciation or bank failure. Oil prices, on the other hand, soften when a slowdown in economic activity is foreseen, i.e. recession.

Those seem to be seemingly disparate messages. Can you have both inflation and recession at the same time?

Well, yes. After all, we suffered through a famous stagflation back in the 1970s and early '80s – proof that inflation and recession are not mutually exclusive.

In fact, the last half-dozen domestic economic downturns were preceded by 20-30% declines in the gold/oil ratio. The 6x level reached last year was historic – and so, too, was the subsequent economic reversal and peak in the ratio of gold prices to oil.

Most interesting is that the 1970s' economic stall began with a substantial spike in oil prices, just as in 2008, followed by a stimulative monetary policy designed to counteract the resulting recession. We'll have to see if the runaway wage-price spiral that ensued is replicated in the next few years.

Is that what the spike in the gold/oil ratio portends...? Well, sort of.

To a degree, the divergence in gold and oil prices reflects a disparity in how retail and institutional investors perceive inflation's timing. Retail investors have fewer tools at their disposal to combat the erosion of their purchasing power. While institutional investors can pinpoint their hedges with currency swaps and other sophisticated derivative strategies, mom-and-pop investors must rely on a smaller repertoire featuring physical Gold Bullion and its ETF proxies.

The Fed's current policy of quantitative easing is designed to generate more inflation over time to wrest the economy from its deflationary path. While we've seen a slowdown in the rate of CPI deflation, actual year-over-year upticks in consumer prices may yet be months away.

Retail investors are much more likely to pile into their hedges early, bidding up gold, while institutional investors tend to hold back until a cyclical recovery commences. Even then, gold may be only one arrow of many in their quivers.

This timing disparity allows a short-term deflationary thrust to develop, to be followed by an inflationary push. That's pretty much the pattern exhibited in the Hard Assets Investor monetary inflation index over the past year. Deflation was on order in the third quarter of 2008, which set up the rebound to a new index high in fourth quarter 2009. 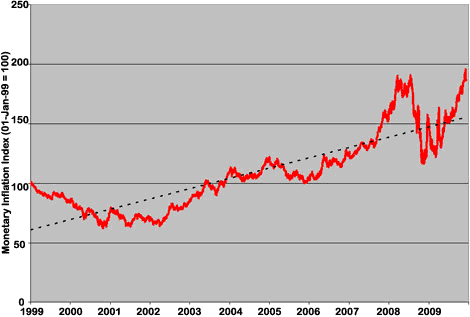 Of course, there is an alternative notion. Remember that long-term 15x multiple...? In the past three weeks, the gold/oil ratio passed through the 15x level, which means the market could be finding equilibrium here at its historic average.

That's doubtful, though, considering the Fed's stimulative policies. Unless the central bank is unusually adept at decelerating quantitative easing on the back end, inflation will be a likely feature of our future economy. Experience indicates the Fed is rather lead-footed.

Not the best feature for a sailor or an aviator.

Looking to Buy Gold today...? Don't pay one penny more than you should; start with a free gram at world-leading BullionVault instead...