END_OF_DOCUMENT_TOKEN_TO_BE_REPLACED

The oil market's mentality is shifting away from oversupply to a quick surge...

But you saw that coming, right?

And while Spot Gold hit a record $1,043.48 an ounce by midday in New York, a new all-time high for gold, there was another headline of equal import.

Monday saw tremors run through New York's Nymex crude oil pits as the three-month roll – the cost of carrying a position in the futures market over to the next 3-month contract – tightened to less than a dollar a barrel.

The nearby November futures settled at $70.41 while the February delivery was pegged at $71.37 per barrel. That made for just a 96-cent spread.

What's the big deal? Just that the carrying charge market develops when there's more-than-adequate supply. It shrinks when over-supply becomes less of an issue, or even shortages look feasible.

Carrying charges, sometimes referred to as "contango", consist of storage, insurance and financing fees. These costs push the price of deferred delivery contracts above the spot market level. This is how Gold Futures, for instance, tend to spend their time. The further ahead the contract settlement data, the more costly the price.

Oil on the other hand tends to live in an inverted, or backwardated, world. Front-month futures actually trade at higher prices than latter months. And since 1985, the Nymex three-month roll has averaged a negative 16 cents a barrel, reflecting higher demand for above-ground supplies than the promise of oil in the future.

The crude market, however, slipped into contango in June 2008 ahead of the July breakdown that sent oil prices into a record tumble. Since then, the three-month roll has averaged $3.78. That's a positive $3.78, mind you. And that's just the average. At the top of the year, the roll was wider than $15 a barrel. 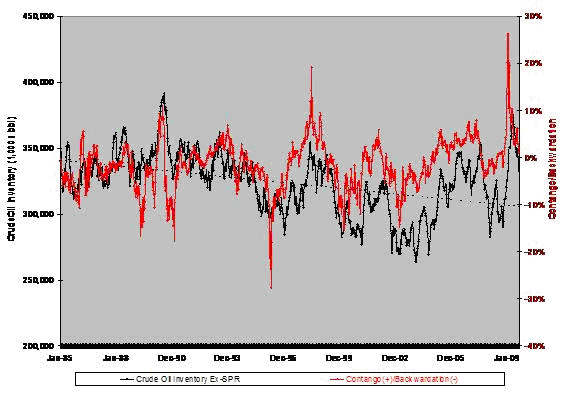 Crude oil's contango has shrunk since January as crude oil prices rose. And now, the spread's been pared to less than a buck, a level not seen since October 2008.

The oil market's mentality is shifting away from oversupply, in other words...and though it's hard to say when the market might slip into backwardation, the last time oil flipped from contango to backwardation was July 2007, when it took only 12 trading days from buck-breaking to inversion.

If backwardation is accompanied by higher prices – as is usually the case – a breakout move to the $90 level for the nearby contract seems likely. Now, that seems worthy of a headline. 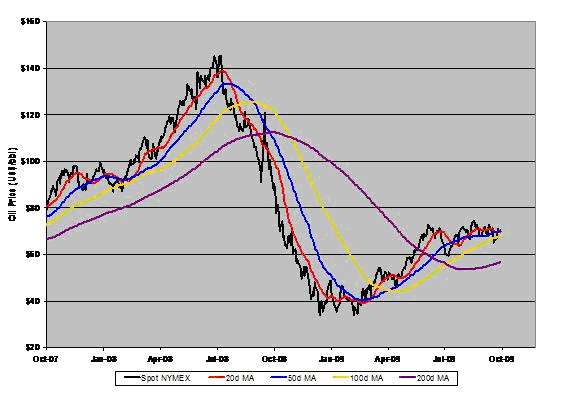