END_OF_DOCUMENT_TOKEN_TO_BE_REPLACED

Trading Gold is suddenly much simpler than trading oil...

Spot Gold (for immediate delivery) seems to have definitively broken out of its trading range, clearing its February high above the $1,000-mark. And where the gold market goes from here is now topic No.1 in chat rooms and at cocktail parties.

Investors in that other bellwether of inflation, crude oil, are poking rather sullenly at the cheese cubes however. Black gold languished while the yellow stuff spiked higher in September. For the month, the nearby Nymex WTI crude contract has yielded a negative 6.8% return as a proportion of margin, while Comex Gold Futures made 52.9% for bullish investors.

That Gold looks directional while oil looks range-bound is really no wonder. The gold and oil markets' populations are wildly different in their approach. Oil is a professional trader's playground, and most of the games being played now are spreads – aimed at capturing smaller moves with less risk – not longer-term directional trades. Among money managers, spread trades outnumber directional positions nearly 2-to-1. For swap dealers, the spread advantage is 3-to-1 and for large non-institutional speculators, it's better than 5-to-1.

Clearly, the big guys are playing small ball in the oil ring. But over in the gold pit, traders are swinging for the fences. Money managers favor outright trades 4-to-1 over spreads. Swap dealers have laid on three times as many directional trades as spreads. Only among large speculators (meaning hedge funds and such) are things more evenly matched.

Much of the disparity between the two commodities is contango-related. In both gold and oil, typically, futures contracts are more expensive than prices to settle right now. But this year, oil's back-month premium – the extra cost of buying the furthest out contract – has shrunk, creating a paradise for bull spreads. Holding a position for three months cost worth more than $15 a barrel back in January; now, it's just north of a buck. 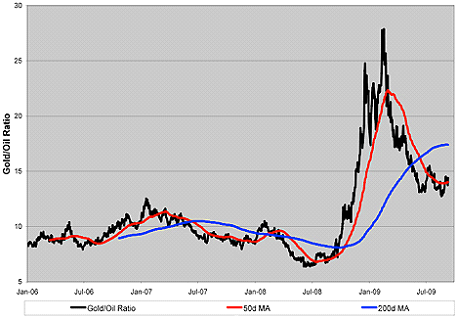 The parting of the ways between oil and Gold is best reflected in the gold/oil ratio, which has pulled up from its nosedive to break above 14-to-1 again.

In July, the ratio's slide reversed only to hit a hard ceiling at 15.5-to-1. Seasonal factors now are playing more to gold's favor, but we'll have to wait and see if the yellow metal can find clear skies above.