END_OF_DOCUMENT_TOKEN_TO_BE_REPLACED

"THE DOLLAR is still driving gold," agree the analysts, pundits and chart-watchers now scratching their heads about where gold is headed next.

That's kind of true, but not entirely. Yes, the Dollar's fall against gold since the start of this decade has been greater than the drop suffered to date by the rest of the world's currencies.

But the last 20% move in Dollar gold prices, for instance – starting from the mid-July low – has been outpaced by gold adjusted for the greenback's fluctuating currency value, as measured by the US Dollar Index.

Priced in these "Not Dollars", Gold has risen 26% since midsummer, as this chart (gold for the Dollar price, blue for the adjusted value, and both starting from Jan. 2000 values) shows. 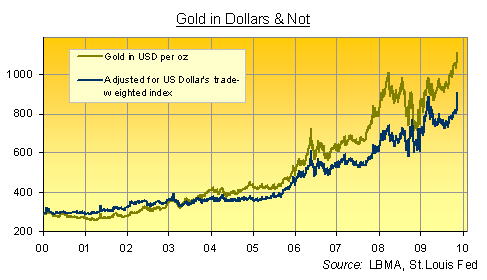 The reverse is true of the US stock market's big surge, however, because it started when the Dollar was stronger and set to weaken – rather than the tepid rally it's put in so far this fall.

Priced in Not Dollars, the S&P has risen by a lower percentage from the March bottom – up 39% – than its USD value. 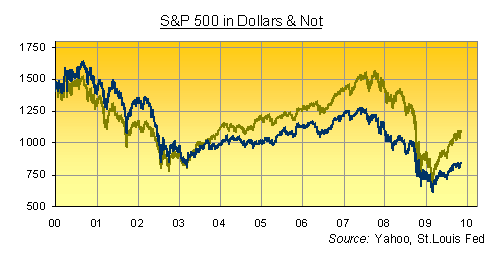 In fact, almost one-quarter of the S&P's bounce to date could, if you so wished, be attributed to the weaker Dollar. Non-US investors have failed to enjoy the same rally as Wall Street. Whereas in Gold, since it turned sharply higher, they've outperformed – on average – to date.