END_OF_DOCUMENT_TOKEN_TO_BE_REPLACED

Two theoretical ways of putting a price on Gold vs. money...

THERE ARE SEVERAL different approaches to calculating a theoretical price for gold, writes Mike Hewitt of DollarDaze.

The purpose of this essay is to calculate this figure using two different methods. For each, the total ounces of gold above ground will be divided by:

Gold vs. Money: All gold now above ground

According to GFMS Ltd, the world's above-ground stocks of gold at the end of 2007 were 161,000 tonnes. Jewelry makes up the largest component of this inventory. Much of this is in the form of 'monetary jewelry' – most popular in India and south-east Asia – for which the value is based upon the content of gold rather than its artistic value.

The total official gold holdings of the world's central banks represent over eighteen percent of the total inventory according to the Sept. 2008 release from the World Gold Council. That figure includes gold held by the International Monetary Fund and Bank of International Settlements. It stands at 29,783.9 metric tonnes. 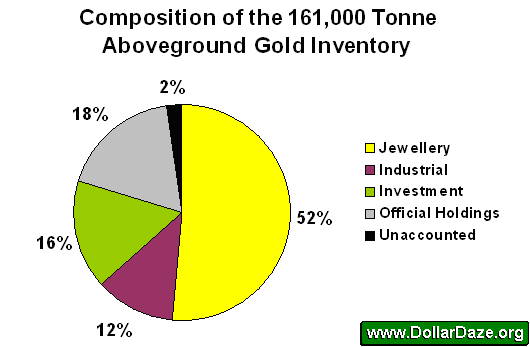 An additional average of 2,209 tonnes of gold was added on an annual basis over the last five years (total production minus the Gold Futures buy-backs required to close forward hedging by gold miners in previous years).

This represents a 1.4% annual inflation rate of the gold supply. The known below-ground reserves of world mining companies are estimated to be another 45,000 tonnes.

Gold vs. Money: All money in circulation

A tabulation of the major currencies in the world converted into US Dollars as of Oct 8., 2008 amounts to $3.8 trillion. If we include the value of all demand deposits (approximated by using official "M1 money supply" numbers), the volume of the money expands to $18.4 trillion.

(N.B: The most recent official figures available were used for determining the values of the different currencies. Some of the data is less current, such as the latest data for China, which is from Dec 2007. Some is simply unavailable, such as Iran.)

Unlike gold, there is no limit to the amount of currency a country can issue, but its value is determined by the public's collective confidence. The severe socio-economic destruction caused by hyperinflation occurs when this value approaches zero.

My previous analysis of the 25 largest economic regions of the globe in July 2008 suggests an annual inflation rate of 6.6% for paper money worlwide.

Gold vs. Money: Estimating a price

Please note that includes ALL gold, no matter in what form it exists. Whereas currency counted as physical paper alone is the most restrictive form of measuring the money supply. The most straightforward method conceptually, it is generally superseded by broader measurements.

Savings accounts are sometimes considered as money, for instance, but not always, as it may be argued that the bank (in theory) may demand some time to acquire physical cash to redeem a withdrawal. The inclusion of other broader forms of money, however – including various instruments of savings deposits, money market deposit accounts, repurchase agreements, money mutual funds, etc – would further increase the price of the world's limited gold stock in comparison.

Returning to the tight M1 money supply measure, the chart below shows the composition by currency of such a comparison. 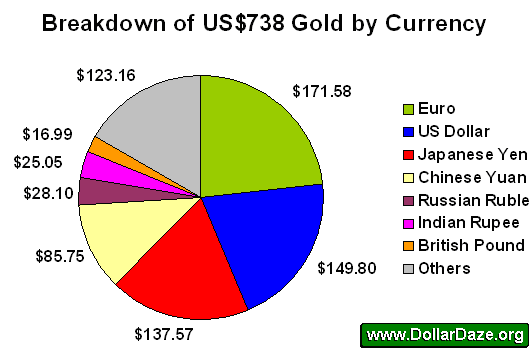 The next chart indicates the break-down in price for an ounce of gold by dividing the currency and demand deposits of the world ($18.4 trillion) by the estimated number of aboveground gold (5,176 million ounces). 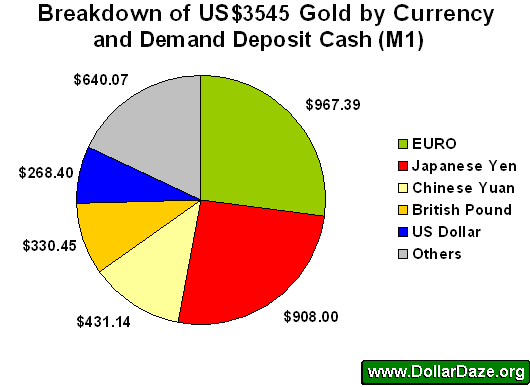 Extrapolating the present inflation rates for both Gold and paper currency produces an annual price increase of 5.2% (6.6% paper inflation minus 1.4% gold-supply growth) for the price of gold.

To conclude, these two analyses are meant to provide a measure of comparing the amount of gold in the world to the amount of paper money using published official sources. The two measures of money used are themselves quite limited in scope.

And whether such comparisons are of value beyond that of curiosity, I leave to the discretion of the reader.