END_OF_DOCUMENT_TOKEN_TO_BE_REPLACED

The impact of America's QE2 – one year on – on currencies, bonds, banking, and Gold Bullion prices...

SINCE THE NEAR collapse of the Western banking system in 2008, the basic underpinning of the floating currency rate system has been under severe stress, and is still in danger of breaking down, writes Gary Dorsch at Global Money Trends.

Traders no longer trust central banks to keep their money printing operations running at a slow speed, basically in line with the underlying growth rates of their economies. Instead, central banks in England, Japan, and the US are all heavily addicted to nuclear QE, and the European Central Bank has also joined the club, by agreeing to monetize the debts of five Euro-zone countries – Greece, Ireland, Italy, Portugal, and Spain.

Since the Federal Reserve began to telegraph QE2 a year ago, the US's core money supply (MZM) has increased by roughly $1 trillion, buoying the Gold Price. In turn, many central banks in other countries that peg their currencies to the US Dollar were forced to expand their money supplies, in order to keep their currency exchange rate on an even keel with the massively inflated US Dollar.

Although the Fed was trying direct most of the high powered money into the US-stock markets, much of it flowed into Gold Bullion, silver, copper, soybeans, corn, rubber, iron-ore, and North Sea Brent crude oil, which is trading around $110 per barrel today.

The Swiss Franc soared to a once unthinkable $1.40 versus the US Dollar, as traders clamored for a currency that was untainted by the stench of QE. Yet the soaring Franc threatens to cause enormous damage to the Swiss economy, which is mostly export oriented, especially sales to the Euro-zone. Upon reaching near parity with the Euro, the Swiss National Bank (SNB) felt compelled to set an upper limit on the value of the Franc, and injected an extra 170 billion Swiss Francs into the Swiss banking network, thus diluting the value of the Franc in relation to other paper currencies, and especially against the price of Gold Bullion.

Traders soon found out that trying to find the ultimate safe haven from abusive central bankers is not to be found by hoarding any type of paper currency, no matter how sterling its long-term reputation. After the SNB unleash its plan to dilute the value of the Swiss Franc, its currency fell by roughly 10% against the Euro and US Dollar within a matter of a few days.

As long as central banks can print endless amounts of paper currency, it can always enforce a ceiling for its currency. The risk of doing so however, is flooding the local economy with a tsunami of paper confetti that could threaten to ignite a new wave of inflation, and in turn, zaps the disposable income of its citizens, and lifts the cost of input prices for local producers. 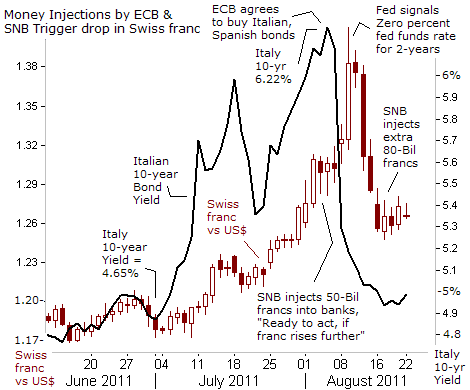 But with the Swiss economy teetering on the precipice of a recession, an outbreak of inflation is not at the top of the SNB's list of worries. Instead, the Swiss Franc is still perched in a dangerously high territory for the local economy that can hurt companies in all sectors.

Already, Swiss export volumes to the European Union, its biggest trading partner, dropped by 14.6% in June. According to a recent study, a 10% appreciation in the Franc's trade weighted value, if sustained, would erode Switzerland's gross domestic product by roughly 3% after two years. A Swiss Multi-National, with half its earnings in Dollars and half its earnings in Euros would see a 15% drop in earnings linked to the effects of the stronger currency.

Helping to take the edge off the Swiss Franc, the European Central Bank held an emergency meeting on August 8th, and agreed for the first time to monetize the debts of Italy and Spain, in its boldest attempt yet to tame the sovereign debt crisis. Italian and Spanish bond yields plunged as the ECB entered the market, sending their yields down 1% within a matter of days. That helped to persuade many speculators to lighten-up on the Swiss Franc.

Because the ECB will have to spend hundreds of billion of Euros to have an impact on the Italian and Spanish bond markets, it would amount to a huge swelling the Euro money supply, or quantitative easing, which in turn, helped to fuel Gold Bullion's rise to record highs of €1,325 per ounce in mid-August. To help cement the Swiss Franc's decline versus the US Dollar and Euro, the SNB said on August 17th it would inject an extra 80 billion Francs into the local banking system, leaving flush with 200 billion Francs of excess liquidity. 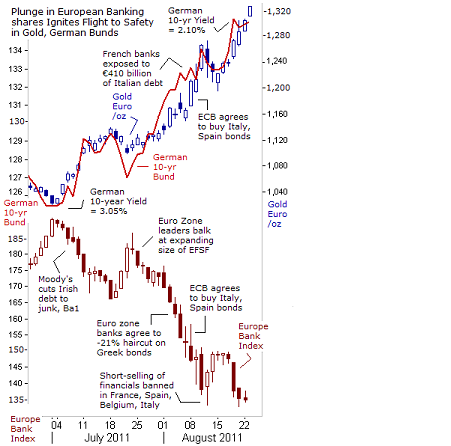 The creditworthiness of European banks is still a major concern because of their heavy exposure to debt in countries such as Spain, Greece and Italy, which are struggling to double digit jobless rates, and buried in economic stagnation.

German chancellor Angela Merkel and France's president Nicolas Sarkozy met in Paris on August 16th, but failed to calm the latest bout of market anxiety. Global equity traders are watching the share prices of European bank stocks slide to their lowest levels since March 2009, and are becoming increasingly alarmed that the Eurozone crisis could trigger another credit squeeze.

In particular, traders are worried about the exposure of French banks to Greek, Italian, and Spanish debt.French banks own €410 billion of Italian debt, making them the most exposed banks in Europe to the debt crisis in southern Europe. With French banks alone holding more of their debts than the entire €440 billion European Financial Stabilization Fund (EFSF) originally designed to bailout Greece, Ireland, and Portugal, a default by either Italy or Spain would likely bankrupt the French financial system.

Under these conditions, French financiers and politicians are insisting that the ECB print Euros to buy Italian and Spanish bonds.

The Euro-Stoxx Banking index has tumbled by 38% in the past six months,led by Britain's Barclays, Germany's Commerzbank, and the top French banks. Overall, the Euro-Stoxx banking Index is 75% below its peak value in 2007. Société Générale's share price lost 45% over less than 3 weeks this August, while BNP's share price has plunged 29%, and Credit Agricole has lost 38%. Seeking a safe haven from the perceived risk of Eurozone banks, many Europeans investors are plowing their safe money into both German Bunds and Gold Bullion. In a virtuous cycle, as the German Bund's yield drops further below the Euro-zone's inflation rate, it makes Gold an increasingly more attractive alternative. 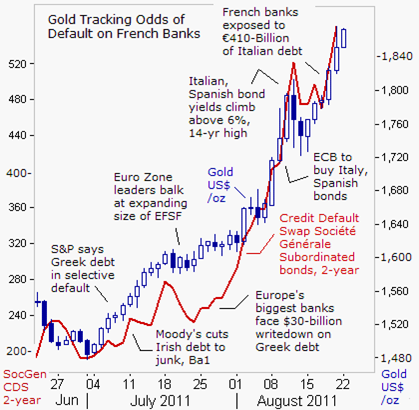 Over the past seven weeks, the Gold Price has also been tracking the cost of insuring the subordinated debt of perceived risky banks, such as Société Générale. The cost of credit default swaps (CDS) to insure €10 billion of SocGen's debt for the next two-years has soared to €540,000. At the same time, the value of SocGen's shares has shrunk from €110 billion in April 2007 to just €17.2 billion today, placing it behind companies like cosmetics maker L'Oreal and dairy producer Danone.

And it's not just the European banks that are in trouble. The cost of insuring Bank of America's subordinated debt against the odds of default, an indicator of potential trouble, rose to $436,000. BofA's shares fell to as low as $6 per share on August 23rd, its lowest since March 2009. More than $32 billion of the company's market value has been wiped out since August 3rd.

President Barack Obama has never understood that there can be no US recovery until housing prices stabilize. Printing more money will not help when 3.5 million foreclosures are stacked in the pipeline, and continue to depress house prices and create more bad debts. In turn, consumer confidence has plunged to its lowest since the Great Depression.

Over in Tokyo, Japan's Finance chief Yoshihiko Noda is threatening to take decisive action if needed in foreign-exchange markets, with the US Dollar pinned at ¥76.50, a record post-World War II low, where Japan's financial warlords have drawn a line in the sand.

"I have become more concerned about the worsening of the yen's one-sided movements. I will take bold actions if necessary and won't rule out any possible options," Noda said.

However, massive intervention has failed to turn the tide against the beleaguered US Dollar, which is hanging on a thread.

On August 5th the Bank of Japan injected about ¥4.5 trillion, into the foreign exchange market, its largest intervention operation on record, which for just a brief moment, lifted the US Dollar ¥2.5 higher to above ¥80. However, four days later, the US Dollar tumbled to ¥76.50, after the Fed pledged to keep the federal funds rate locked near zero-percent for the next two years. As a result, the yield on the US Treasury's 2-year note fell to a record low of 4-basis points above Japanese 2-year yield, weakening the value of the US Dollar. 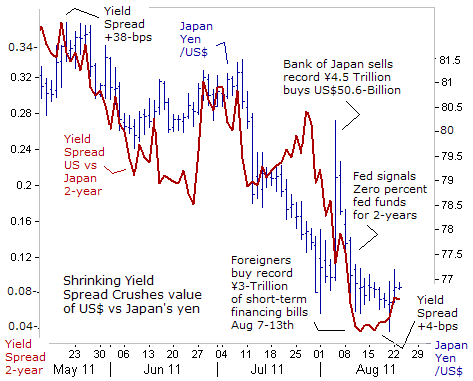 Ironically, foreign investors bought a record ¥3 trillion of Japanese short-term bills, during the week ending August 16th, negating two-thirds of the BoJ's intervention, while their net selling in Japanese equities hit the highest in more than a year.

Japan's economy is buried deep in a recession, contracting for a third straight quarter, at an annualized 1.3% rate.To offset lackluster demand at home Japanese Multi-Nationals have increasingly relied on exports to drive growth. But exports dropped 5% during the latest quarter, the sharpest decline in more than two years, due to a strong Yen, and slowing overseas economies.

Another round of US quantitative easing – QE3 – would be devastating for Japan, and America's No.2 creditor will argue strenuously against it at late August's central-banking festival at Jackson Hole, Wyoming.

"We must steer the economy very carefully, because we still have downside risks including the problem of the rising yen," Noda has warned. With the Fed pegging the fed funds rate at zero-percent for the next two years, the BoJ would probably have to dump ¥25 trillion into the money markets in order to prevent the US Dollar from falling below ¥76. Most likely, the intervention won't be sterilized, and would help to support the price of Tokyo gold. Japan's ministry of finance is expected to recycle its intervention stash into US Treasuries, to help finance America's budget deficit, yet is might start to surprise the markets, by shifting some funds into Gold Bullion.

Buying Gold for your personal reserves today...? Slash your costs but get the maximum security using world No.1 online, BullionVault...