END_OF_DOCUMENT_TOKEN_TO_BE_REPLACED

Some people will never respect gold as an asset class. Don't make their mistake...

AND SO the Dow Jones Industrial Average is back below 11,000...AGAIN. Meanwhile, most European markets were down more than 5% yesterday, writes Eric Fry for the Daily Reckoning.

In other news, a small biotech company, Medicinal Genomics, announced yesterday that it has successfully mapped the DNA of marijuana. Also, President Obama leaves today for a vacation.

Returning from dreamland to the real world...Gold is making headlines again soaring back above $1,800 an ounce.

Gold has been making a lot of headlines these days – both because of the success it has achieved and because of the failure that so many investors seem to anticipate.

Despite the fact that gold has soared more than 500% during the last decade, most professional investors still refuse to embrace the precious metal as a respectable asset class. Gold remains a relic. A has-been. A roll-your-eyes investment.

Gold is like a prostitute that becomes a brain surgeon. No matter how accomplished a surgeon she may become, most folks will still consider her a hooker, not a doctor.

That's unfortunate, especially if you happen to need brain surgery.

Right now, the entire world needs a kind of monetary brain surgery. Gold can handle the job. So don't let her skin-tight spandex shorts and her stiletto pumps fool you; this gal can do things with investment capital and personal savings that paper currencies can only dream about.

Gold can preserve wealth. It has for several millennia. That's a track record worthy of at least a 5-Star rating from Morningstar.

Here at The Daily Reckoning, we have liked gold for a long time. We still like it.

Back in 2000, colleague Bill Bonner named gold his "Trade of the Decade." And we have been singing gold's praises ever since. Bravo for us; we got it right. And so what? Most of us care more about what will happen next than about what has already happened. And in the case of gold, most of us want to know if this spectacular decade-long advance can continue. In other words, is gold a "Buy" or a "Sell?"

It is a "Buy," dear reader. At least that's our guess.

We continue to trust gold because we continue to distrust the politicians and central bankers of the West. Actually, we do trust them; we trust them to pursue irresponsible fiscal policies and reckless monetary policies.

Take a close look at the chart below. Notice that the gold bull market did not kick into overdrive until late in 2008, right about the time the Hank Paulson's Treasury Department began his ex cathedra dispensations of cash to financial institutions deemed "too big to fail" or merely, "too well connected to fail." 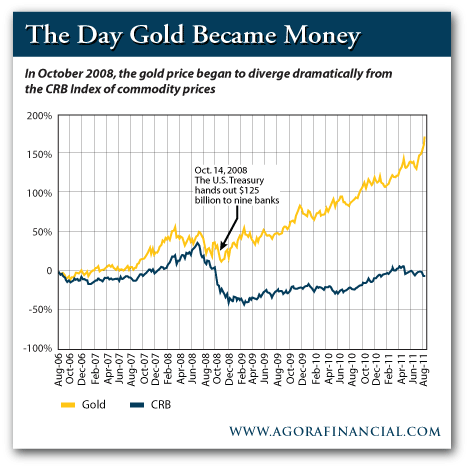 Most of these Dollars had not even been born yet. They were not even a twinkle in Ben Bernanke's eye. But Ben went to work right away. He went into the private recesses of the Federal Reserve and started procreating billions of little Benjamins, Andrews, Alexanders and Abrahams.

The gold market picked up immediately on this salacious monetary activity, by more than doubling since late 2008. But here's the really interesting thing: while the Gold Price was doubling, the rest of the commodity sector was doing nothing. That's not unprecedented, but it is unusual.

As the left side of the chart above shows, gold tends to move up and down with the rest of the commodity sector. But that correlation ruptured in late 2008. Since then, commodities have been slumping, while gold has been soaring.

We agree with both markets.

Those two pieces of paper are a "Sell," dear reader, which makes gold a buy.

The Euro is an immediate "Sell," which means the Dollar might be a short-term "Buy." But we'd sell the Dollar anyway and Buy Gold. Why mess around with short-term, counter-trend moves? The Dollar's primary trend is down, not up.

A growing number of Dollar-holders seem to agree. Over the last couple of years, the central banks of China, India and Russia have been swapping some of their vast pile of Dollars for gold. Many lower-profile nations like South Korea, Thailand and Mexico have been boosting their gold holdings as well.

And now comes our favorite "investment strategist," Venezuelan President, Hugo Chavez, promising to sever his country's foreign reserves from the "dictatorship" of the US Dollar. Chavez announced yesterday that he does not merely wish to sell all his country's Dollar reserves for gold and a basket of non-Dollar currencies, he also wants his country's gold to sit where he can see it and touch it.

According to Bloomberg News, Venezuela will shift its cash reserves "into currencies from emerging markets including China, Russia, Brazil and India..." Additionally, says Bloomberg, "Chavez will move forward with a proposal to repatriate as much as $11 billion of gold reserves held in the US and Europe as part of a plan to shift assets away from American institutions."

What's he worried about? The US government would never confiscate his gold, would it?

We confess, dear reader, it is very hard to Buy Gold after it has already been rocketing for more than a decade. We must admit; it makes us nervous to Buy Gold at $1,800 an ounce. But strangely, it makes us even more nervous not to.

Wondering about the best way to Buy Gold?...