END_OF_DOCUMENT_TOKEN_TO_BE_REPLACED

If you think the Gold Price is volatile, just take a look at the price of gold mining stocks...

ASK AN INVESTOR TO LIST his or her best picks since 2000, and what percentage of them do you think would say gold or silver, asks Mike Shedlock for Whiskey & Gunpowder...

Chances are, not many. Most would probably tell you about some technology stock that they happened to hold onto after the Crash, which went on to double or triple in price from the bear market low in 2002.

In fact, not only would making a Gold Investment or buying silver probably not enter the conversation, chances are most people wouldn't be able to name a single gold or silver mining company. That's because even though the Gold Price has almost tripled – and miners have risen over 600% – since 2000, most people haven't yet realized that precious metals have been outperforming the general market since then by leaps and bounds.

These events reached the front page around the country, and this time, the Dollar's decline coincided with a sharp rise in public awareness about the weakening greenback.

As a result, the precious metals bull market may be entering a new phase. Because when the general public becomes more aware of the Dollar's bleak future, more and more people will see charts comparing the Gold Price and the US Dollar index...and they'll ask themselves why they haven't made a good Gold Investment.

Such a shift in public awareness is usually the ingredient that changes a stealth bull market – like the one we've seen so far in Gold Prices – into a raging bull market.

But unless they collect coins as a hobby, most people have very little regular contact with the Gold Market. With the exception of a brief period at the peak in early 2006, the precious metals rally has garnered very little investor interest.

Since May 2006, fund flows out of precious metal stock funds have been huge, even though the Gold Price remained near its peak. This suggests that even the investors who are aware of gold remain more interested in trading gold stocks than holding them for the long run.

All the sentiment signs suggest that we have a long way to go before gold is considered a must-have, long-term, buy-and-hold investment. Such sentiment extremes are the stage at which all long-term bull markets end.

Technology stocks reached that pinnacle of sentiment in 1999-2000, and real estate reached that point in 2005-2006. The precious metals bull market may now just be at the dawn of its recognition by the public, which makes it unlikely gold is anywhere near an end to its bull trend.

You can see the periodic consolidations outlined in black on the chart. Since May 2006, it has consolidated yet again, laying the groundwork – I believe – for another sprint higher. 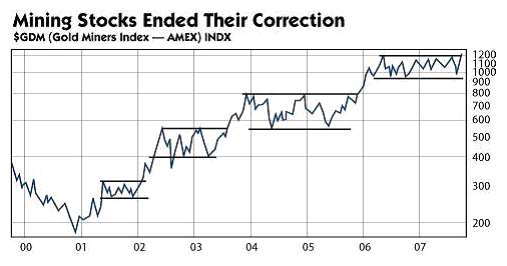 I have been keeping a sharp eye on miners ever since my paid service, The Survival Report, was launched in April.

While I have anticipated a resumption of the long-term bullish trend, I've also been mindful that the correction from May 2006 was ongoing and could still produce more downside before it was completed.

That downside came when the general market sold off in July and August and the miners were pulled down with it. The Amex Miners Index fell from a July high of 1,175 to an August low at 890 – a loss of 24% in one month.

However, that sharp loss in mining stocks was not accompanied by a decline in gold, and as soon as the general market stabilized, the miners quickly rebounded. The recovery was further aided by the Fed's decision to lower the Fed funds rate by 50 basis points, which led to a broad rally in miners and a breakout in the Gold Market above its May 2006 high.

The sharp sell-off in August appears to have been the washout that was needed to end the correction from May 2006 in Gold Price – and the miners look to have now resumed their long-term uptrend, too.

If you can bear the volatility, mining stocks may just be the way to play this bull market.