END_OF_DOCUMENT_TOKEN_TO_BE_REPLACED

Many investors buy gold mining stocks expecting a leveraged return on gold. But it hasn't worked out that way...

A BIG question on every gold investor's mind right now is this: Why are gold stocks underperforming gold? Aren't they supposed to bring us leverage to the Gold Price? asks Jeff Clark, editor of Casey Research's Big Gold newsletter.

Yes, they are, and their performance been both disappointing and puzzling. There are some exceptions, to be sure, but in the majority of cases the stocks are lagging the metal. And it's been happening for most of the year. What's going on?

I think part of the answer lies in the state of our current environment. Recent headlines and developments around the globe have ratcheted up fear...from the S&P's downgrade to European bank solvency, from fears of another recession to worse-than-expected unemployment. The nervous climate has pushed investors toward gold for safety, simultaneously reducing the demand for gold equities.

You don't say, "Hey, I need a new iPad!" when you live in hurricane alley and a storm is coming. You make sure you've got protection for your family. Likewise, fears of Europe's debt problems ruining their economy don't exactly make investors run out and buy Barrick. They Buy Gold.

First, let's get a handle on how gold producers are performing relative to the metal. Here's a chart that logs the weekly performance of GDX (the Gold Miners ETF) in relation to GLD (the metal ETF). Positive numbers represent the percentage by which GDX outperformed gold that week; negative numbers signal how much it underperformed the metal. 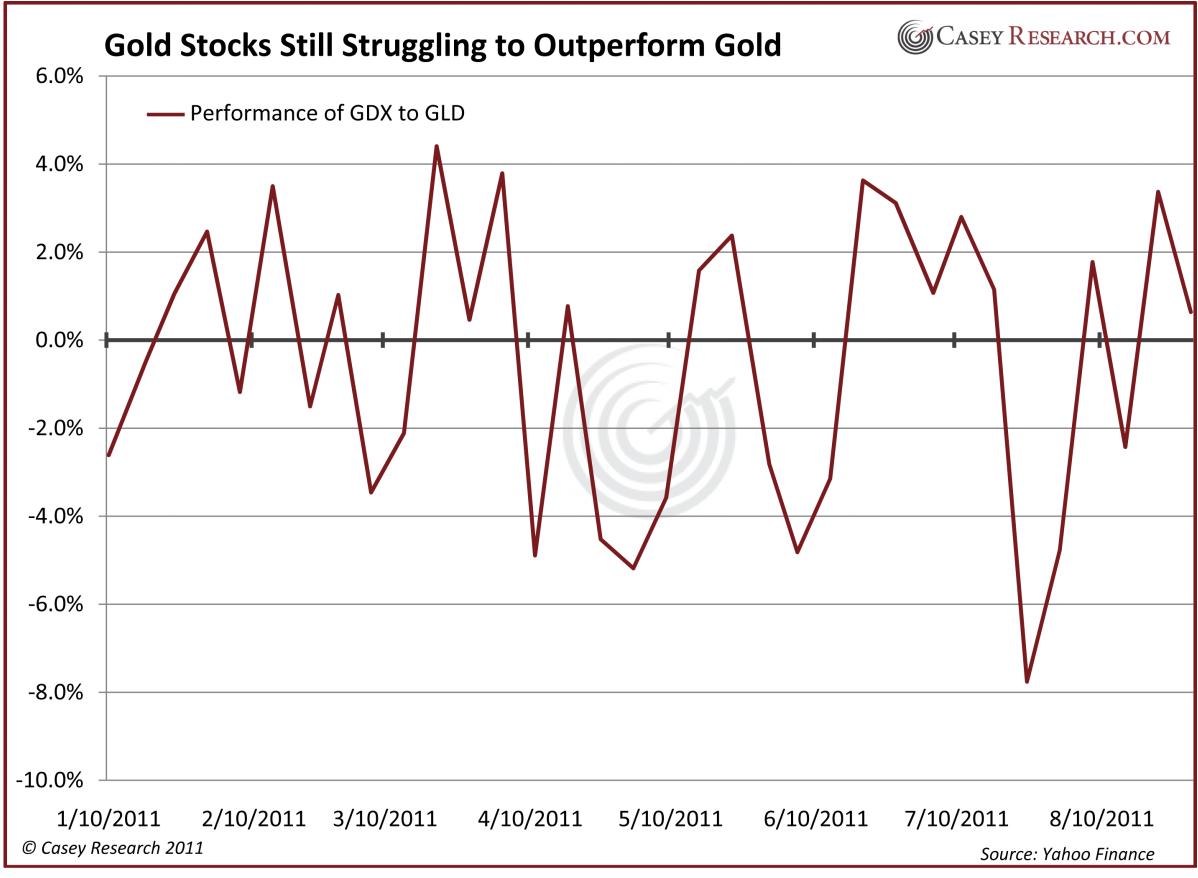 As you can see, while there have been periods this year when gold stocks have outperformed the metal, roughly half the time they haven't kept pace with surging Gold Prices. This is not the picture of an asset that's supposed to bring a leveraged return to gold.

So what's going to move them? If I were a physician and gold stocks were my patient, I'd say, "Take two catalysts and call me in the morning." Like some of these…

Less Fear, More Greed: We probably need a shift in the investing climate before gold stocks excel like we want and expect. An environment full of fear will draw investors toward safe havens and away from stocks. We don't necessarily need a "roaring twenties" type of atmosphere (though that would help); we just need one where there's a lack of constant bad news. Once investors feel the sharks have left the beach, they'll be more apt to look for ways to gain a higher return than metal can bring.

What if we get a 'Greater Depression', and fear is high for years? I think the better gold stocks still outperform in that environment. For starters, investors may fear that other assets won't make much money; this has been the case with the S&P this year...and bonds could be next. A shift into stocks could also take place when inflation turns higher, as investors scramble to earn a higher real return. Last, history has shown that the natural progression is to move from the metal to the equities in a bull market. I think that's our future, sooner or later.

Keep in mind the good news here: The gold you own is performing exactly as it should be in response to current events. We own gold for protection against the very things for which it's supposed to provide shelter: failing currencies, lagging economies, and fear of inflation. This is proof that holding gold has been the right call and will continue to be the right call for the foreseeable future.

I don't know when the shift from fear to greed will take place, but I'm convinced it will. And I suspect that the change in sentiment could be sudden.

Competitive Dividend Yields: Many gold companies have increased their dividend payments over the past year. Growing dividends could raise the eyebrows of investors and broaden the investor base.

That said, this is not a catalyst that will kick in next week. The current dividend yield of the gold industry is 0.75% (GDX is 0.70%); while this is up significantly since 2001, it is still less than half the S&P average of about 2.0%. However, as yields approach the levels of the broader market, institutional investors will be drawn to the Gold Mining sector. Gold stocks could become core holdings, opening the door to an entirely new audience of investors. That's a group that could light a fire under prices.

Governments: The CME hiked margin requirements on gold twice recently and five times on silver earlier this year. At some point a hike could be one too many, prompting investors to slow down on gold and turn to the undervalued equities to capture bigger returns. Another catalyst could be a government announcing they're lowering tax rates on miners – a shock in the current rapacious environment that could see new money pour into the sector overnight.

The Usual Suspects: The usual sparks could ignite interest in gold stocks: a company announcing a large gold discovery...a sudden or unexpected surge in inflation...the Gold Price soaring 20% overnight due to some world-changing event... the public recognizing the potential in gold stocks and not just gold. Or how about a well-known investor or analyst outside the gold industry announcing he's Buying Gold stocks? Could you imagine the impact on our tiny sector if, say, Warren Buffett declared he was adding gold companies to his portfolio? (He's not exactly pro-gold, but you get the idea.)

I'm not saying any of these things will come to pass or are imminent. There are certainly other potential catalysts, too. My point is that sooner or later investors will be drawn – or perhaps even forced – into Buying Gold stocks.

The investment implications here are twofold. First, if I'm right, then the strategy should be to buy when shares are relatively cheap and hold for the duration of the bull market. You may think we'd suffer "opportunity loss" if we have to wait too long, but that could be a dangerous game; you could buy after they take off and miss out on some of the easier gains. Further, I don't know of another sector that is both cheap and imminently poised to break out. The second implication is that corrections wouldn't be a time to get out, but a time to consider getting in.

The ultimate prognosis, in my opinion, is that Gold Mining stocks are headed much higher. Sooner or later a catalyst will ignite interest in our sector, and the rush will be on. Now is the time to build positions in the stocks you want to own.

Looking to invest in physical Gold Bullion? Cut your costs and boost your security with BullionVault...