END_OF_DOCUMENT_TOKEN_TO_BE_REPLACED

Judging from trading in Gold Futures, the summer vacation is already over...

APPARENTLY the lure of the trading floor is more attractive than the beach, since gold traders and investors are trickling back into the market, writes Brad Zigler at Hard Assets Investor.

Open interest in Comex Gold Futures has risen by more than 30,000 contracts since its early-August nadir, largely feeding the demand of buyers who've pushed spot prices up by more than $32 an ounce.

Gold Futures haven't been the only beneficiary of prodigal investors' return. Capital is now flowing into, rather than out of, the SPDR Gold Shares Trust (NYSE Arca: GLD). Bullion assets are on the rebound as well. Last Wednesday, nearly another tonne was added to GLD's vault holdings. 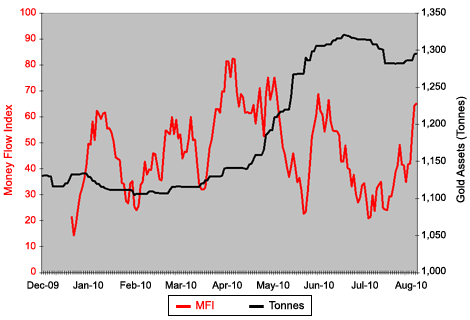 And what of Gold Mining shares?

From a macro view, the so-called junior shares have done better in August than the established producers – and, in fact, better than gold itself. Since Aug. 5, the Market Vectors Junior Gold Miners ETF (NYSE Arca: GDXJ) has more than doubled the return of the bullion-based GLD shares. Producers proxied by the Market Vectors Gold Miners ETF (NYSE Arca: GDX) outgunned metal, too, but by a narrower margin.

Perhaps that's not so surprising. After all, juniors attract investor attention because of the potential they represent, both for finding gold and as acquisition targets. Certainly, if you've seen the come-ons published by some mining stock touts, these juniors are just days away from "exploding", "screaming" or "rocketing" to stratospheric heights.

What goes up fast, though, has the potential to come down fast, too. Volatility's sword is double-edged. For that reason, many market observers and financial advisers wonder if junior mining issues are too volatile for investors' own good. To address that question, we've got to look at some numbers.

There's no question that Gold Mining stock prices can vacillate more than bullion's or that of the broader equity market. That's fairly evident if you look at the track record of exchange-traded products since the November 2009 launch of the GDXJ fund. 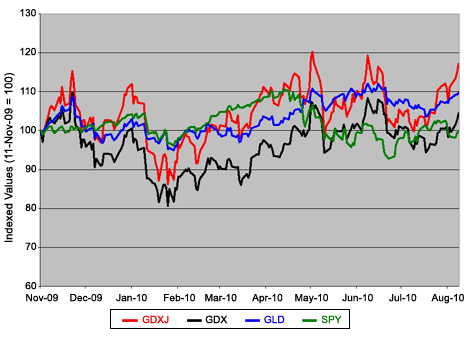 The red line tracks the junior mining stock-based GDXJ portfolio's price trajectory; the black line scribes the path of the producer-heavy GDX portfolio. Without even looking at the numbers, you get a sense of the mining ETFs' relative volatility.

GDXJ appears to vary more than GDX, though a more pronounced slump near the initiation of the track record kept the GDX underwater until spring. At the same time, the GDXJ portfolio's up spikes seem more pronounced.

The thing worth remembering about volatility is this: Yes, you might be able to get big gains with a voluble stock or fund, but you may not be able to keep them. If subsequent losses are deeper or more protracted than your upside, you won't be able to retain your outperformance.

When financial advisers assess the risk of an investment, they most often use the standard deviation of daily or monthly returns as their basic volatility metric, but a Sharpe ratio may also be employed. The Sharpe ratio uses the risk-adjusted return of an investment in the numerator and the annualized volatility in the denominator. Beta – a measure of an asset's variance relative to the broader market (in our case, the proxy for the S&P 500 Composite is the SPDR Depository Receipt (NYSE Arca: SPY) – is commonly used as well.

Here's what happens when the conventional numbers are run...

So what do these figures tell you or your advisor? Well, the first thing an adviser might note (if he or she didn't see the graph beforehand) is that the GDXJ portfolio's annualized volatility makes it the "riskiest" asset. Standard deviation doesn't distinguish between upside and downside variance, though.

Now, there's compensation for this risk. That's reflected in the Sharpe ratio, which essentially tells you that you get paid back a 42 cent reward for every $1 of risk undertaken. Meanwhile, beta ascribes a correlation to the general stock market. A positive number describes an investment that generally follows the market; the degree to which it follows is reflected in the magnitude of the beta coefficient.

GDX produced a much smaller return than GDXJ over the period with slightly less volatility. Its risk payback – the Sharpe ratio – is only a third of GDX's. However, GDX is more negatively correlated to SPY's return and volatility.

Note, however, that the gold-holding GLD had the best risk payback – a Sharpe ratio of 0.52. It's all because of its low volatility, though, not an outsized return.

Conventionally speaking, then, an adviser would likely recommend GLD, rather than the mining funds, to clients needing or wanting gold exposure. Given the two-edged sword of volatility, however, we ought to confirm the adviser's advice by using downside variance exclusively as our risk metric. After all, upside volatility would be a good thing and not a risk, right?

Here's what we get when we use this more unconventional approach...

As it turns out, the conventional thinking is confirmed. Despite some compression of the risk scale, there's still slightly more downside risk exhibited by the juniors. And still, bullion's low volatility keeps it atop the risk-adjusted reward mountain.

Armed with this information, investors can be more confident that the investment route they take into the gold market better matches their tolerance for risk and their return expectations.

Buy gold – and own it outright, off risk – at the very lowest trading costs possible by using BullionVault...