END_OF_DOCUMENT_TOKEN_TO_BE_REPLACED

Most stock-market indexes follow pretty much the same pattern when viewed from a technical analysis. But not the Aussie Gold index. Let's have a look at something out of the norm, to see if there are some gains brewing.

Australia's gold mining shares index – the ASX GDX – has traded in a large channel since last September. It's taking both the good and the bad at this stage.

On one hand, there is the rising price of Gold itself. The Gold Price has moved up to $930 just this week. But on the other hand, the GDX gold miners index has suffered from generally choppy stock market conditions.

The price action of the index illustrates those contrary forces. The chart is a succession of fast moves in both directions. It's a rangy market where no clear long-term direction appears.

So let's see what the technical indicators make of that... 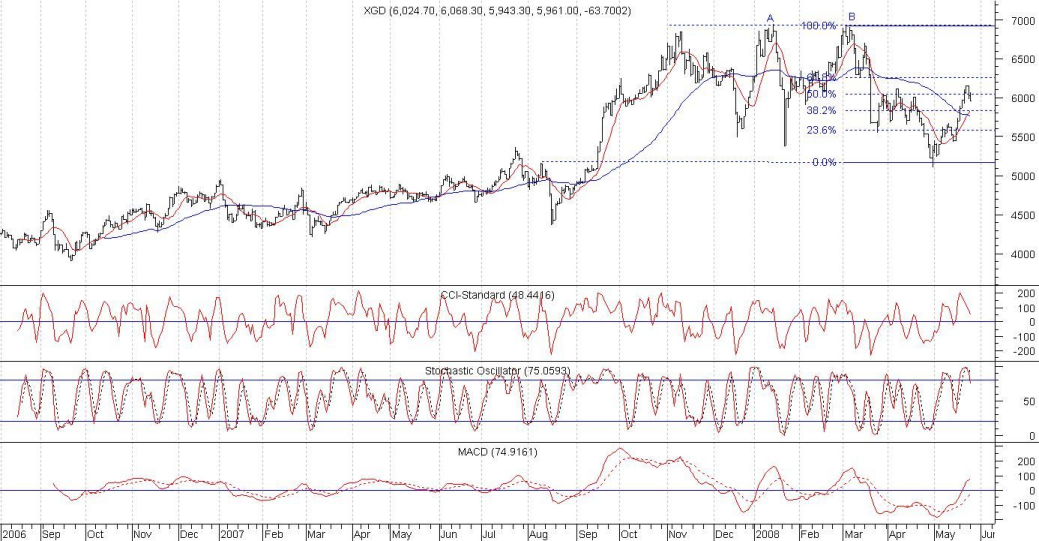 Between August and November 2007, the GDX gold miners index rose by more than 55%. Two other attempts to break above 7,000 level failed. Those historical high points constitute the resistance line of the current trading channel.

The low was posted on April 30 just above 5,100 points, which is the support line of the trading channel.

On a technical analysis, the technical indicators show that mixed signals argue for further rangy trading price action during the coming weeks. For active mining stock traders, there's a lot of potential to pick up some gains both ways.

The 14-day MACD is bullish. One of our favorite indicators here at The Daily Reckoning, fell to historical low levels at the beginning of May. Then it turned up and then crossed above the 0 line.

The underlying index was clearly oversold at the start of this month. That argues for upward momentum in the Aussie Gold Miners in the mid-term.

A crossover in the moving averages (MA) – another key technical tool – agrees with this analysis. The 10-day MA crossed above the 50-day MA last week. It's a buy signal for mid-term trend-followers.

But the 5-day Stochastic Oscillator, however, respectfully disagrees, even it disagrees on a shorter time-scale. The oscillator says that gold mining shares have gotten a little hot in the last few days.

So while the signals may disagree, the conclusion is clear. There's money to be made in the medium term according to the charts. But you could perhaps wait for a decent correction before moving in.

The next price target we're setting is perhaps 5,300 points – meaning a 38.2% Fibonacci retracement. Then traders using technical analysis to get ahead will look to switch back to long positions in the GDX gold miners index.