END_OF_DOCUMENT_TOKEN_TO_BE_REPLACED

THE GOLD MARKET, just like any other, represents a meeting place of ideas, says Brad Zigler at Hard Assets Investor.

The prevailing sentiment among bulls shifted from unbridled enthusiasm to worry last week as gold's price took another $49 dump. All told, spot metal's sold off about $100 since peaking Dec. 3rd.

It's at this precipice that bulls and bears stared each other down. Apparently, the bulls blinked. Latecomers to the gold ascent had been getting their heels nipped by pundits' natterings about a bubble, so doubt ripened in the rarified atmosphere above $1200 an ounce.

But, let's face it: The breathtaking rise in the metal's price begged for a correction. And what a correction it was! The avalanche of Dec. 4 wiped out seven days of pretty-much-uninterrupted price climbs.

Last Friday, Comex Gold Futures lost more than $6 on a substantial volume spike. More telling, though, was the pickup in open interest. Aggressive selling – new shorts – piled in near the session's end, reversing the week's liquidation trend. You've got to have brass, er, appurtenances, to initiate a gold position over a weekend these days. Now, it's the sellers who are emboldened.

So, gold was sold short last week by the brassers. To what end? Are they expecting a massive sell-off? A reversal of the bull market? Well, some might. Others are willing to settle for the dispersion of some market froth.

It's not always easy to know where the fundamentals end and the bubbling begins, but a look at the momentum in Gold Prices can give us a clue. 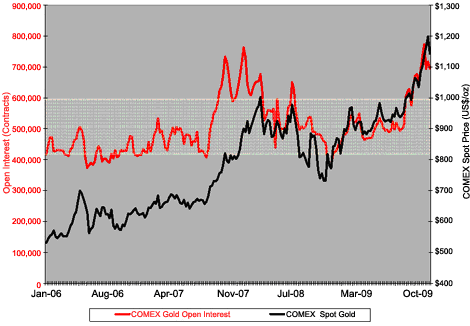 The white hashed band on the chart represents one standard deviation in Comex gold's delta-adjusted open interest (i.e., options plus futures). Excursions outside the band, you'll note, are generally associated with price extremes.

See how the triple top in open interest between November 2007 and March 2008 – above one standard deviation – set up the double top in the Gold Price?

Does this mean the froth dissipates if gold open interest slumps back below the 600,000-contract level or its price dips below $1000? Probably more the former than the latter. Gold can advance above $1000 without bubbling. To do so, however, gold would need to be more a stealth play, like the $100-plus advance made between January and October of 2007 – quiet and deliberate, keeping open interest in its normal range.

Now just what are the odds of that...?

Why risk leveraged losses, margin calls and counterparty risk in the Gold Market when you can own physical Gold Bullion...outright and off-risk...just like a professional dealer at BullionVault...?