END_OF_DOCUMENT_TOKEN_TO_BE_REPLACED

Much of that was driven by Gold Investment via physically-backed exchange-traded trust funds, as well as physical gold coins and bars, as US unemployment and lingering fears of further economic difficulties in Europe continued to support gold as a safe haven. 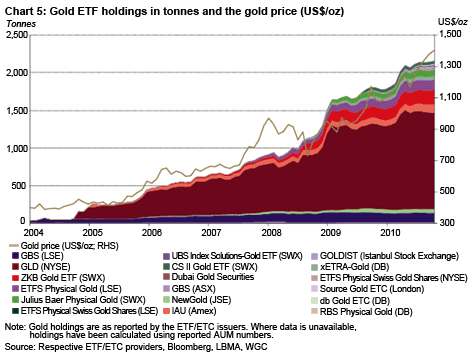 The largest Gold ETF, the SPDR Gold Trust (US stock-exchange ticker: GLD) saw the year's largest gains, with 147.1 tonnes added to the fund during 2010 to reach a total of 1,280.7 tonnes. But it's interesting to note that since the report's publication, GLD's holdings have dropped by more than 55 tonnes – its lowest levels since last May.

This is a case where optimism can hurt. As Ong Yi Ling, investment analyst with Phillip Futures in Singapore, notes, "The ETF is decreasing due to the optimism in the US economy. If we see concerns on unemployment coming back to haunt us, then perhaps we could see the ETF holding start to increase again."

Another ETF-related surprise revealed in the WGC's Gold-Investment Digest comes out of India, where holdings in physically-backed Gold ETFs increased to 15 tonnes, or almost 75%. While the size of these holdings is miniscule compared with India's overall gold consumption, that rate of growth has made people take notice.

Gold ETFs have been around in India since 2007, but they've almost doubled in size over the past few months, as Indians look for additional ways to invest in their favorite metal. Currently, eight Gold ETFs are listed on Indian exchanges, with the possibility of more on the way.

Prithviraj Kothari, managing director of Riddisiddhi Bullion Ltd., says that "Volumes in Gold ETFs are posting over 100% growth for past several months. This shows that awareness about retail investment products like ETFs is gaining momentum and we can expect further growth."

Those wishing to hoard hold their gold also increased their demand. In the US, 38 tonnes (1.2 million ounces) of American Eagle bullion was purchased in 2010. While not a record amount, it is a strong showing, and the second quarter of 2010 booked the third-highest level of American Eagle sales behind only Q4 of 2008 and 2009.

Bullion sales in the US, meanwhile, have shown some price sensitivity, with sales in the fourth quarter dropping to 8.3 tonnes from a previous three-quarter average of 9.9 tonnes.

Chinese investors, however, have more than taken up the slack. Physical delivery at the Shanghai Gold Exchange reached 836.7 tonnes in 2010, 236.6 tonnes of which occurred during the fourth quarter. As of Q4 2010, physical delivery now constitutes a full third of trading volume.

Speaking of China, the recently launched Industrial and Commercial Bank of China gold accumulation plan (GAP) has seen brisk investment, growing to 11.5 tonnes of gold by the end of 2010. Investors have opened more than 1 million accounts so far.

While GAP is not a direct way to buy bullion, it does offer Chinese investors a way to accumulate small amounts of gold on a daily basis over a long period of time. Once the contract matures, the investor is able to renew the contract, convert it to cash or exchange it for physical gold. The program was pilot-tested in several cities in the country and officially launched on December 10.

Full-year 2010 data for the jewelry and industrial segments won't be released until mid-February's Gold Demand report. Instead, the WGC Gold-Investment Digest looks at third-quarter data and makes some educated guesses about what we might see at the end of the year.

Interestingly, while jewelry demand in the first nine months is only up 18% compared with the same period in 2009 (driven by a second-quarter lull), the value of that demand ($55.5 billion) is the same as the value of all of the gold jewelry bought in 2009 – because of the high Gold Prices.

Apparently the high Gold Prices aren't discouraging jewelry purchases. The highest level of demand growth happens to be in the country with the highest current demand for gold – India. Gold jewelry demand is up 73% over the same nine-month period in 2009 – a whopping 513.5 tonnes.

China's jewelry demand also continues to grow, but the numbers aren't quite as impressive as those seen in India. Gold jewelry demand only grew 27% during the first nine months of 2010. But remember, China was one of the only countries in 2009 that didn't have a contraction in jewelry purchases, so the country hasn't had to recover from a decrease in jewelry demand.

In some ways, we're just treading water until the World Gold Council's big Gold Demand Trends report comes out in mid-February, when we'll get to parse 2010's supply and demand story in more exacting detail. After all, Gold Investment demand was only 37% of demand in 2009.

Still, it's interesting to look at the sector on its own, particularly with a nod to ETFs. Although ETFs have been a fast-growing demand segment in recent years, they still hold a relatively small piece of the pie, accounting for only 17% of gold demand in 2009. In February, we'll get to see if that piece has gotten bigger, or if the more traditional way of investing in gold – jewelry – continues to reign supreme.

Get the safest gold at the lowest costs using world No.1 online, BullionVault...