END_OF_DOCUMENT_TOKEN_TO_BE_REPLACED

To each exhortation made by one ("It's a breath mint!") came the rebuttal, "It's a candy mint!" Universal harmony was ultimately restored through the intervention of an announcer declaring Certs to be "Two...two...two mints in one!"

Discussions between hard-money advocates in the financial markets can sometimes take on the same characteristics. The retort, "Gold is catastrophe insurance!" is often uttered in response to the claim, "Gold's an inflation hedge!"

If recent history is any guide, Gold's more of one than the other. There's yet a third role for the yellow metal, but let's not get ahead of ourselves.

Gold's had a quite a ride since President Nixon ended the fixing of gold at $35 per ounce in Aug. 1971. Once unfettered, Gold was quickly propelled higher, taking silver along for the ride.

At the apex of its inflationary cycle ending in 1980, the Gold Price (the red line in the chart below) averaged $615 an ounce, while silver's middling sales price (black line) was $21 an ounce. 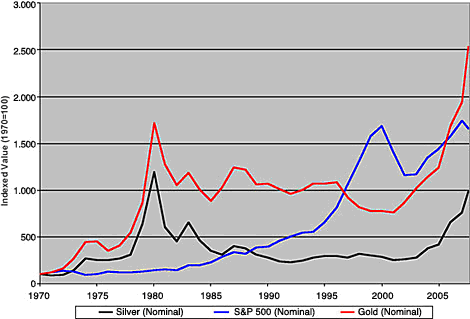 But after 1980, fortunes reversed, sending precious metals prices into a two-decade swoon. It took Gold until 2007 to finally surpass its 1980 average price.

All fine and good, you may say. People who bought gold back in 1980 finally reached breakeven in 2007. But did they really? After all, gold doesn't earn interest and it costs money to store, insure and transfer the metal as well.

If that weren't bad enough, there's that pesky inflation problem. Adjust asset prices for changes in the Consumer Price Index (CPI) and you get a chart that looks quite different. Despite gold's brief foray above the $1,000-per-ounce level this year, 1980 gold buyers are still far from breaking even. To reach purchasing power parity, in fact, gold's 2008 price would have to average $1,641 per ounce.

Folks who bought silver in 1980 will be behind the eight ball until the white metal's price averages $52. 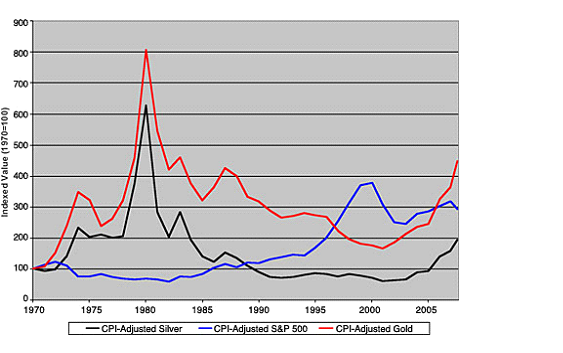 From this, it would be easy to say that Gold is not the inflation hedge it's touted to be.

But that's not really the case.

In fact, gold provided a 4%-per-annum real rate of return since 1970, topping the inflation-adjusted returns of stocks and silver.

If Gold, or any other asset for that matter, hadn't at least kept pace with inflation, its real return would be negative.

Still, you shouldn't be lulled into thinking that holding gold earns you 4% over the inflation rate each and every year. That's the average return over a nearly four-decade-long hold. Pick a different starting point and you can end up with a vastly dissimilar return.

Just ask those people who bought gold in 1980 and look at the market through this lens:

Buying at a speculative top clearly hurt these folks. Stocks were notably kinder to this generation and to the next cadre of investors that followed a decade later as well.

The most recent cohort of investors' affinity for precious metals can be readily understood when we compare the asset returns generated over the past eight years:

For all but the nearest investment horizon, the drawdown risk for gold and silver investments is significantly higher than that associated with stocks.

The volatility of the markets is reflected in the reward-to-risk ratios. Until very recently, stocks were a more reliable source of returns. But if there's one thing that should stand out from the charts and tables, though, it's the counter-cyclicality of precious metals and stocks.

Note how the precious metals spike of the 1970s coincided with a slump in the stock market. Later, in the 1990s, metals buckled while stocks soared. With the advent of the new millennium came another cycle favoring metals.

The integration of these non-correlated assets into a portfolio can actually reduce overall volatility. Dampening volatility, in turn, reduces drawdowns, allowing investors to keep more of their gains. Here, the greater variance in metals prices can be a boon.

The higher the volatility, the smaller the allocation required to obtain a diversification effect.

So, what can we take away from all this? Simply this: Gold can provide a return above inflation, though that return is highly volatile. That volatility, however, means a portfolio requires only a modest exposure to metals to obtain diversification.

And that, to paraphrase yet another old commercial, allows you to "double your pleasure; double your fun."