END_OF_DOCUMENT_TOKEN_TO_BE_REPLACED


THE DEBATE IS coming to a head over whether we will see inflation or deflation, writes Bud Conrad for Casey Research.

Will the coming recession bring deflation from the housing-related credit crisis in which many forms of debt are disappearing in default? Or will the lack of confidence in the Dollar and the US government stimulus bring us inflation?

The consensus of economic opinion is that the recession now starting could lower demand and thus bring a lowering of prices.

"It's just like Japan! Credit collapse is like the Depression! Those were deflationary!" say many respected practitioners of the dismal science.

But some deflation! Crude over $100; wheat hitting $25 a bushel; Gold Prices at $970. What is going on? Yes, US housing is dropping 7% in price, and the stock market is back and forth going nowhere. So which is it? Inflation or deflation?

I always say "Let's look at the data."

That's why I have been looking at previous recessions to see what happened to Gold and gold shares in the last two issues of Big Gold. Here I just look at the Real Gross Domestic Product, which is the biggest measure of how well our economy is producing wealth, to compare to the inflation level. I use the most quoted government inflation number, the Consumer Price Index (CPI).

During periods of recession, the GDP was falling – no surprise there, as that is sort of the definition of recession. But look at the inflation... 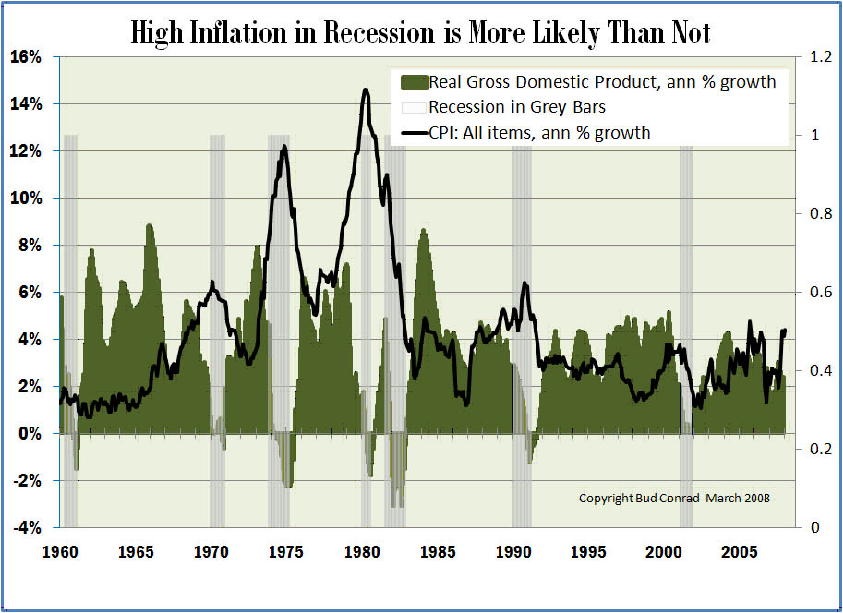 Inflation wasn't falling during the previous US recessions; it was higher.

Okay, in two of the seven recessions mapped here, someone might argue whether or not it was higher, but it wasn't noticeably lower. And it is amazing how convincing a look at history can be.

We have been describing the "Rock and a Hard Place" problem for the Fed, in that if they lower interest rates, the Dollar collapses and eventually inflation appears; or if they defend the Dollar with higher rates, then the economy collapses. This analysis shows just how serious the bind is.

Historically, when inflation jumped, mostly spurred by the big oil shocks, we saw both big recessions as well. At the time, it was acknowledged that the commodity shock caused the recessions by driving inflation and interest rates higher.

So the Stagflation is really not so new or rare an occurrence. I have been predicting this for a long time. We are now there. Bernanke's performance has been lackluster and not inspiring confidence, to say the least. He might as well have said "Let the Dollar be dammed, full speed ahead with the helicopters."

Instead of a determined, cigar-smoking disciplinarian like Volcker, Bernanke just looks weak.

To some extent history has already predicted the result, so it is really beyond one man's attempt to push a lever behind the curtain. Really, there's not that much for him to do but watch the dollar collapse and the US economy to slow.

Stagflation, in a word.