END_OF_DOCUMENT_TOKEN_TO_BE_REPLACED

Judging the odds via Gold of living-cost inflation or a deflation in prices...

SOMETIMES, after a long day, I end up muttering to myself, admits Brad Zigler at Hard Assets Investor.

The latest incident followed a meeting in which I was asked to prognosticate on the likelihood of inflation. I won't tell you what I said, but I will let you in on the internal debate (i.e. mutterings) that followed.

The questions raised after my talk forced me to look at both sides of the issue in a new light. After all, just as there's a case to be made for inflation, there are also some reasons for believing we're headed into deflation.

Looking at the probabilities of inflation/deflation last summer, we gave the statistical edge to inflation. But that was after a purely mathematical exercise, leaving many Hard Assets readers wondering about the fundamentals behind the numbers.

Regular readers are familiar with our "monetary inflation" readings. Derived by measuring the strength of the US Dollar against Gold Bullion as well as the world's second reserve currency, the Euro, our real-time indicator's been on an upward – albeit ragged – trajectory since November 2008. 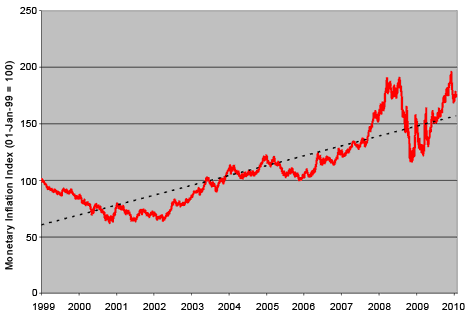 If nothing else, the declining exchange value of the greenback reflects a fear of higher inflation in the US, and underlying these expectations is the liquidity poured from the Federal Reserve's helicopters over the past 18 months.

Yes, there has been a lot of money pumped into the banking system. But if you believe that the money supply ultimately determines price levels – at least as measured by such metrics as the Consumer Price Index – it may seem like you've been waiting a long time to see the inklings of inflation.

The oft-quoted definition of inflation – "too many Dollars chasing too few goods" – hasn't quite played out, despite the Fed's open liquidity spigot. There have been plenty of Dollars, but there's also been a countervailing surfeit of goods. Ergo, core inflation has remained remarkably stable. 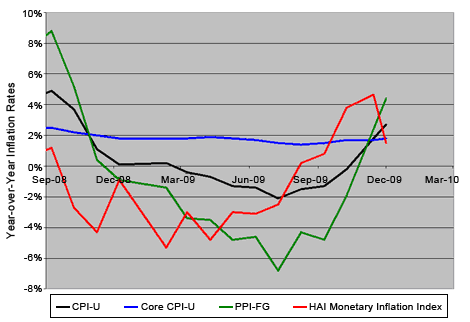 Another reason for the latency of inflation: velocity. That money which the Fed's pumped in hasn't turned over fast enough...business hasn't been brisk enough...to kindle inflation's fire.

This decline in the velocity of money – the rate at which it changes hands – and also in the money multiplier, which figures how much the M1 and M2 monetary aggregates swell for each Dollar of Fed cash, means the central bank's efforts, instead of stimulating lending, have really only added to reserves.

How can prices rise precipitously if all this productive capacity is idled? Well, it's happened before. Think of the Stagflation suffered in the late 1970s. We could very well be headed into another bout of cardigan-sporting fireside chats from the Oval Office.

The Fed's dexterity in removing all that excess liquidity shouldn't be overestimated either. If history is any guide, the central bank's been rather lead-footed when throttling the economy. Draining reserves won't be painless.

There's also the issue of political courage. Sopping up all those extra Dollars to choke off incipient inflation could abort a nascent recovery. Unemployment's already a problem, and raising rates or draining reserves early could cause crowds of the freshly unemployed to amass with pitchforks and torches outside Ben Bernanke's window on the National Mall.

Traditionally, the Fed's shied from raising such opprobrium. It's not so much the crowds the Fed frets about; it's their representatives up on the Hill. Raising the unemployment rate means our Fed chairman will have to trudge up the Mall to face an increasingly populist Congress.

Ironically, the case for deflation rests on unemployment as well. Put simply, inflation's more likely to be sustainable if labor costs rise (that's where the "too many Dollars" come from in the inflation definition – from pay packets), not when it declines.

The present trend, however, is for lower labor costs: fewer jobs, smaller pay increases, greater reliance on freelancers to reduce benefits costs, even pay freezes and pay cuts. The doom-and-gloomer inside me mutters how this isn't the kind of environment that can sustain inflation. It's more like a recession or even, at the extreme, depression.

Plus, we're still shedding assets – household as well as corporate – and that's not the milieu in which prices are bid up either. Asset prices are deflating, not inflating.
Now, the Dollar's weakness is a two-edged sword. While it seems that some inflationary expectations are built into cross rates now, there's little risk of a sustained downward spiral for the Dollar, and the consequent destabilization wouldn't be countenanced for long. Two-thirds of reserves are still held in greenbacks, after all. That doesn't mean that some near-term erosion is impossible, but it could actually lead to higher import prices on a transitory basis.

With all that in mind, I'm still giving the edge to inflation. But I'll be muttering about it for some time to come.