END_OF_DOCUMENT_TOKEN_TO_BE_REPLACED

GOLD TOOK an honest (or dishonest?) shot at giving the gold bears a failed breakout on Monday last week, following the SEC vs Goldman Sachs news, writes Gene Arensberg in his Got Gold Report.

But each time gold attempted a run into the $1130s, the yellow metal met with determined bidding. We can believe that technically minded traders all noticed the support which formed there. So moving on from here, we will mark the high $1120s as potential support with potential resistance well above in the $1160s – until proven otherwise on both counts. 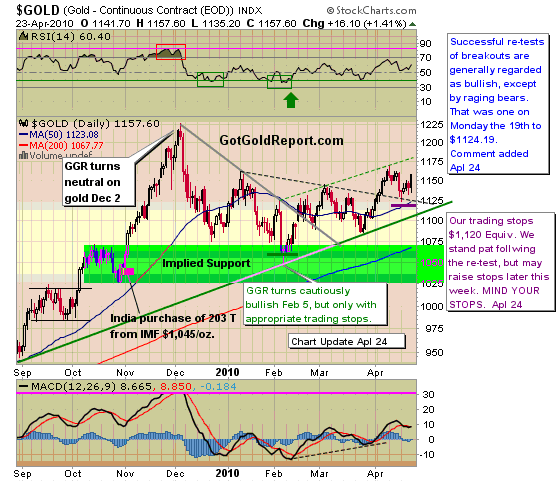 Looking at the Goldmans case, and as the United States Congress mulls a bill to create yet another regulator and another oversight bureau, opponents of even more government regulation were given a shot in the arm by news that, apparently, some SEC employees were caught with their pants down so to speak.

At least we have more information now to understand what SEC rank and file consider as high priorities during a sure-enough financial crisis. Why does Elliot Spitzer come to mind now? He didn't even work for the SEC.

Normally we wouldn't "schtupp" so low as to bring it up, but dog-gone it, we just don't need another regulator in the US. We don't need more regulations and more big government. We have plenty already, thank you very NOT. What we do need, in contrast, is for the agencies and regulators we already have to, oh, maybe actually do the work they are paid to do and oh, maybe enforce the regs already in place...

Still, with the SEC split about whether or not – and how – to go after Goldman Sachs, the Big Sellers of gold and silver got chance to knock the weakest of the longs out of the game – until now.

With that, uh, "short" intro, let's take a look at what the largest of the largest traders of gold and silver futures in New York did right after that sneak attack on the House of Blankfein, aka Goldman Sachs. The latest Commodities Futures Trading Commission (CFTC) weekly commitments of traders (COT) report is for the close of trading as of Tuesday, April 20.

Today, the Got Gold Report is focused on the changes in positioning of the largest futures traders in that report – the traders the CFTC classes as "commercial". We refer to those commercial traders in US Comex Gold Futures as "LCs" for "Large Commercials".

Gold Prices dipped a net $10.34 or 0.9% to $1,140.56 for the week-ending Tues 20 April. Over that time, which included the Goldman Sachs sell-off, commercial traders reduced their combined collective net-short positioning (LCNS) by a smallish 6,088 contracts or 2.3% from the week before. The total open interest fell by a slightly higher 7,518 contracts to 521,338 contracts open.

Remember that is as of last Tuesday's close, before the Goldman damage control stories were put out and before we learned that the decision by the SEC to take on Goldman Sachs was anything but unanimous. All we'd had was the sharp drop in prices.

Yet not really very much changed in the "commercial" players' positioning. And when compared to all contracts open, the relative commercial net short positioning (LCNS:TO – the most important graph we track) actually fell about half a percentage point from 49.82% to 49.37% of all Comex gold contracts open.

The LCNS:TO really didn't move very much on the SEC shot across Wall Street's bow in other words. We cannot point to either aggressive selling or short-covering in this report...

How best to Buy Gold today? Cut out the middleman – and cut out the risk of c counterparty default – by using world No.1 BullionVault...