END_OF_DOCUMENT_TOKEN_TO_BE_REPLACED

How the futures-tail has wagged the Gold-Price dog amid the collapse in financial stocks...

WE TAKE A LONG-TERM VIEW of the precious metals here at Casey Research, writes David Galland, and I'm not one for commenting on current market gyrations or the various subthemes that regularly emerge in the blogs.

That said, because I know the topic of Gold's latest moves is of interest to many – and to myself as well, though my longer-term perspective lessens the heat around day-to-day, week-to-week, or even month-to-month gyrations – a couple of quick observations would seem to be in order.

First and foremost, regarding the purported discrepancy between the price of gold on commodities exchanges and that of physical Gold Bullion, in my view, any real discrepancy would be jumped on by the arbitragers so fast, it might even break the land-sound barrier.

As for the shortage of gold and silver bullion products, we would attribute this to a couple of factors. The first is that there has been some poor planning on the part of the mints. Secondly, the poor planning is likely due to a failure to appreciate how many people are coming to the conclusion that it is better to own at least some precious metals, instead of holding only the unbacked paper of governments.

With regards to Gold's recent steep fall in the face of clearly rising physical demand, it seems that this was largely caused by gold traders taking profits – or closing out – their derivatives positions. At every step up in this bull market, the precious metals have been stuck, for months at a time even, in trading ranges...the bottom of which evokes buying and the top of which triggers selling.

It is always worth keeping in mind that the defining feature of commodities exchanges is the leverage the instruments that trade on these exchanges offer. Consequently, the traders who call those exchanges home are able to marshal considerable juice in their quest for a new Lexus with 16-way driver seat features and custom leather interior. The salient point is that while those of us who believe in the values offered by gold and silver like to think of them as "substantial" markets, when it comes to futures markets, they are like a gnat on the tail of an elephant.

To make the point, consider that the cash value of foreign-currency contracts traded globally each 24-hour period is on the order of $3.2 trillion. By comparison, over the same 24-hour period, on average, $26 billion worth of gold trades hands. For silver, the number is even smaller, just $4.5 billion.

All of which is to say that:

The long and short of it is that a trading range can go on until something occurs in the psychology of the market to shift the majority of new bets onto the long side...at which point the upper end of the trend is decisively broken and the range is reset to a higher level.

It is my contention that the top of the range for gold is now $1,000, and we could see it continue to test that level, before falling back, for some months to come.

But really, who can say? It could happen literally almost overnight. So shifting to a somewhat nearer-term perspective, it is worth looking at the chart from Seasons of Gold, an archived article from the April 2006 edition of the International Speculator. 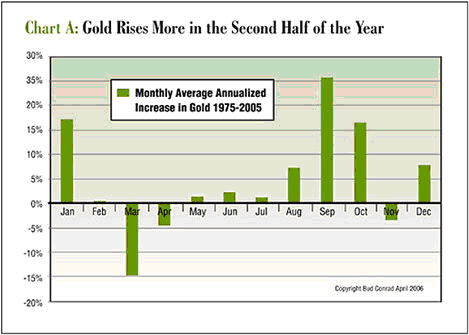 While the chart hasn't been updated lately, the data used is so long-term – 30 years – that updating it wouldn't have changed anything by any noticeable amount. (See Cheap as Chips? for full analysis of the 1971-2008 period...)

Viewing the chart above, it doesn't take a lot of imagination to assemble a scenario whereby the continued strong investment demand for physical gold meets the traditional strength of the Indian wedding season buying that contributes so much to the historical pick-up in gold prices in September.

Toss in the effective nationalization of Freddie and Fannie, putting the US taxpayer as the guarantor of last resort on fully half of the mortgages in the nation...and mix in some of the ripe geopolitical apples now falling from tall trees, or the imminent realization that oil isn't going back to $50 or that the inflation phenomenon is not temporary, and we could see a big bump in the Gold Price over the next couple of months.

Time to go long in the Gold Futures market? Well, on that topic, all I can say is, tread carefully...and use as little margin as possible just now. Because, as wild as things have been in pretty much all the markets, we haven't seen anything yet. If there is one thing you can take to the bank, then – in the months just ahead – the volatility of virtually all markets is going to go ballistic.

For the attentive trader, that can mean big, and repeated, opportunities for profit. But for the casual trader, high volatility can lead to quick loss making.

Sticking to a longer-term perspective – buying and holding physical Gold, for instance, and buying more on the dips – is the way to go, I believe.