END_OF_DOCUMENT_TOKEN_TO_BE_REPLACED

Silver and Gold Investing still get no respect, even as these record levels...

WITH THE Gold Price printing new all-time highs in the $1280s – and silver testing new multi-decade weekly closing highs above $20.70 an ounce – could it be any more natural for people to warn us that both precious metals are in a bubble? asks Gene Arensberg in his Got Gold Report from Atlanta, Georgia.

From our perspective, the people doing the warning about Gold Investing being in a bubble are the same ones who told all of us that gold was not a worthwhile "investment" because it cost money to store and it doesn't earn any interest or dividends. Now that gold has been above $1000 for a whole year, we believe those calls by the anti-gold babblers are a form of "metal envy".

We cannot wait to see what they are saying when gold clears the next $100 or $200 or $300 or $500 hurdles as we believe it almost assuredly will before this Great Gold Bull breathes its last.

The gold bubble babblers expediently overlook the biggest bubble there ever was or probably ever will be in our lifetimes – that, of course, is the massive, unprecedented overprinting and horrible, immoral competitive dilution of all fiat currencies by governments.

On the data front, meantime, we note the continued outperformance of silver over Gold Prices last week. The most "interesting" development overall is a stunning drop in the number of net short contracts for the US Dollar index by commercial traders, as reported by the ICE. That probably reflects a sudden "Forex earthquake" after the Bank of Japan intervened to weaken the Yen. For precious metal buyers and sellers, that change – and the week ahead – is sure to prove interesting as gold now tests the uncharted technical waters above its previous $1260s resistance.

In the Comex Gold Futures market, open interest rose by 1.4% to 594,058 contracts open. Once again, the closing price on Tuesday's cut-off point for Commitment of Traders data was the highest-ever nominal close for on a COT reporting Tuesday. But the large commercials – the "industry" side of the market – kept their net short positioning still 15,292 contracts below the 308,231 record of Dec. 2009, with gold then in the $1190s and the open interest much lower (521,433 contracts).

Indeed, when compared to all contracts open, the relative combined commercial net short positioning (LCNS:TO – the most important graph we track) was statistically flat last week at 49.3% of all Comex Gold Future contracts open. 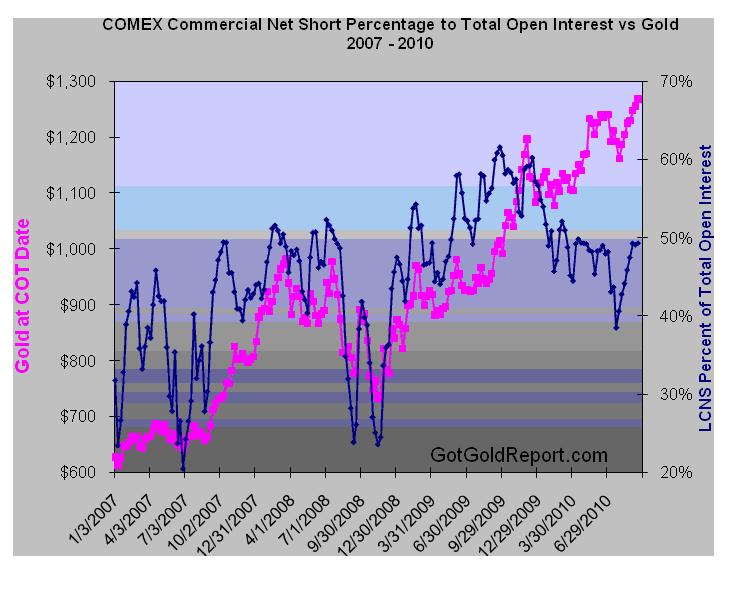 Since Tuesday, Gold Price support seemed to jump from the $1240s to the $1260s, which was former resistance at the previous record peak set in June. The shortest of short-term traders will be watching that level very closely. Resistance is currently undefined and unknowable, but traders will likely view $1300 as an important battlefield looking higher.

As the LCNS:TO moves higher, it suggests that the largest commercial traders are more willing to increase their net short positioning for Gold Futures and vice versa. Conversely, we think that lower LCNS:TO readings are an indirect measure showing us there is additional bull-side "horsepower" on the sidelines in the gold futures markets.

So, when we see an LCNS:TO of something like 60% (as we witnessed in December of 2009), we are conditioned by experience to raise our trading stops, because it shows that the largest sellers of Gold Futures are aggressively on the sell side. A very high LCNS:TO also suggests there isn't very much bull side firepower left under "normal" conditions.

Notice please, that with gold on a bona fide breakout, closing at its highest ever and despite a historically high, near-record open interest, the LCNS:TO is remarkably still below 50%. The 50% level is historically on the high side, but we saw much higher levels in previous breakouts for gold. And as we have said many times, high LCNS and LCNS:TO readings tell us that the commercial traders are more confident in lower Gold Prices, but they do NOT tell us that gold is heading lower necessarily.