END_OF_DOCUMENT_TOKEN_TO_BE_REPLACED

Detailed data from the CFTC's latest Commitment of Traders report...

WITH THE Gold Price approaching past resistance, writes Gene Arensberg in the Got Gold Report, the latest Commitment of Traders report shows Comex commercial traders increasing their "opposition" to gold and to a lesser extent, silver.

Silver's non-confirmation of gold is also worrisome for precious metals investors, even as gold continued its strangely quiet march higher since we last reported here at Got Gold Report. Indeed, last week gold tested the $1230s – a good thing since we advised reentering the gold trade with our short-term ammo, taking a full position July 27-29 with gold then at $1159 the ounce. 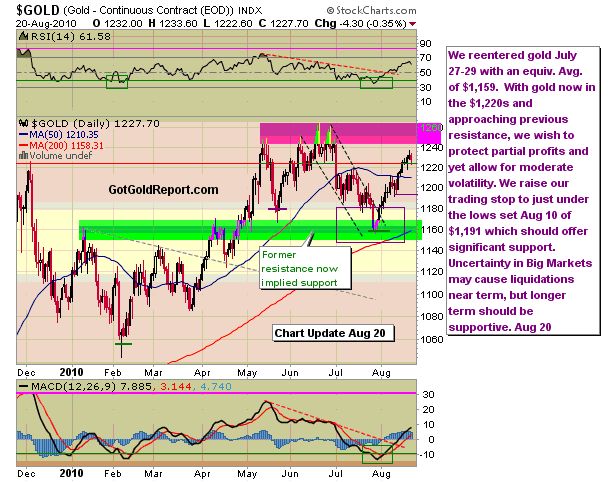 For new readers please note that in this particular chart our impressions as to where gold might encounter support and resistance are highlighted in green and pink respectively. Notice please that gold has steadily advanced since our reentry July 27-29 and is now approaching the area where it found staunch resistance in May and June.

The Commodities Futures Trading Commission (CFTC) issued its weekly commitments of traders (COT) report on Friday, revealing data for the close of trading as of Tuesday, 17 August. Here at GotGoldReport.com, we're focused on the changes in positioning of the largest futures traders in that report – the traders the CFTC classes as "commercial" – including the bullion banks, large dealers and swap dealers combined.

Overall, the Comex Gold Futures open interest (i.e. all contracts open) rose by 20,596 contracts from 523,078 to 543,674. And as anyone can see, the Comex commercial traders were apparently willing to increase their net short positioning nearly, but not quite as much as the increase in the total number of open contracts for the period.

Thus the "opposition" to gold, although apparently on the increase, has not yet reached the level we might call "aggressive". Sort of confirming this, is the fact that the Large Commercials' Net Short (the LCNS, meaning the number of their long minus short contracts) last week rose less than the increase in the open interest. 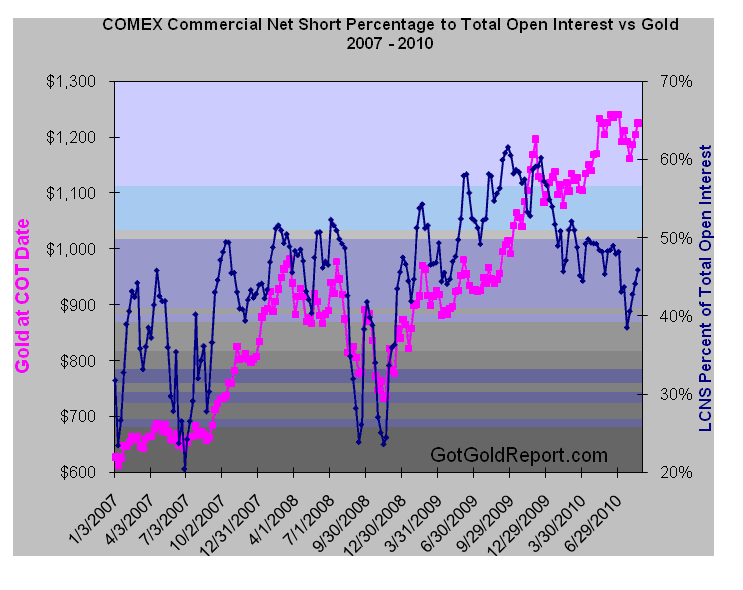 As the LCNS moves higher as a proportion of total open interest, it suggests that the largest commercial traders are more willing to increase their net short positioning for Gold Futures and vice versa.

Just five reporting weeks ago the LCNS:TO reached a 17-month low of 38.6% just prior to our reentry on the long side of gold. It has since then risen up to 45.9% which is considerably higher, but it remains on the low side of the graph above in comparison to where it has been for most of the time since the early 2009 recovery period.

In Texas English what that means is that the LCs have increased their willingness to take the short or sell side of gold, but they haven't yet gotten obviously aggressive about it yet and their relative net short position today is smaller in comparison to where it has been for most of the last year and a half.

Incidentally, prior to 2009 we would have viewed an LCNS:TO of 46% as getting close to the caution flag zone. But during 2009 the LCNS:TO traded as high as 61.6% and came in above 50% in 36 weeks or 69% of that year. And as an interesting comparison, the lowest LCNS:TO in all of 2009 was just 41.9% during the week of January 20. Today's relative large commercial net short positioning is "only" 4 percentage points above 2009's lowest point in other words, suggesting that the largest "paper gold" sellers are a lot less confident in lower Gold Prices than they were for most of 2009.

Get that? With gold in the $1220s the Large Commercials are a lot less confident in lower Gold Prices than they were in nearly all of 2009 as gold traveled from the $820s to the $1100s roughly speaking.

We think that lower LCNS:TO readings are also an indirect measure showing us there is additional bull-side "horsepower" on the sidelines in the Gold Futures markets. That is, when we see an LCNS:TO of something like 61%, there isn't very much bull side firepower left (there's a speculative bull on the other side of each of those contracts, of course), but the lower this ratio goes the more bull side firepower there is – all else being equal.

Remember that the PMs reported an all-time high net short position of 223,009 contracts in the 22 June COT report. Back then, gold was just under $1240 the ounce. So although they added a large amount of net short positioning this week, they are about 54,855 contracts "less confident" of lower Gold Prices than they were seven reporting weeks ago – so to speak – and with gold only about $15 less in price. 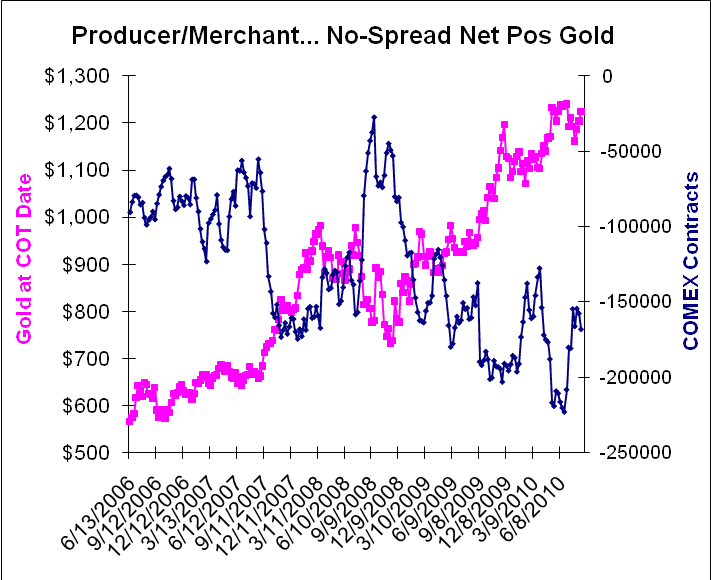 The blue line in the graph above is expressed as a negative number, so when the commercial net short position falls, the blue line rises and vice versa. And while the Producer/Merchants showed a little real enthusiasm for shorting gold last week, the "other commercials" – the large traders the CFTC classes as Swap Dealers – also added to their net short positioning, extending it by a further 8,035 contracts to show 81,416 contracts net short.

Over the past four reporting weeks, the Swap Dealer commercials have added a total of 20,384 contracts to their short bets as gold traded from the $1160s to the $1220s. But this week we have to notice that both classes of commercial traders were willing to increase their net short positioning and, as we say, were working off the same page of the same playbook. Regular readers will already know that has not always been the case lately. 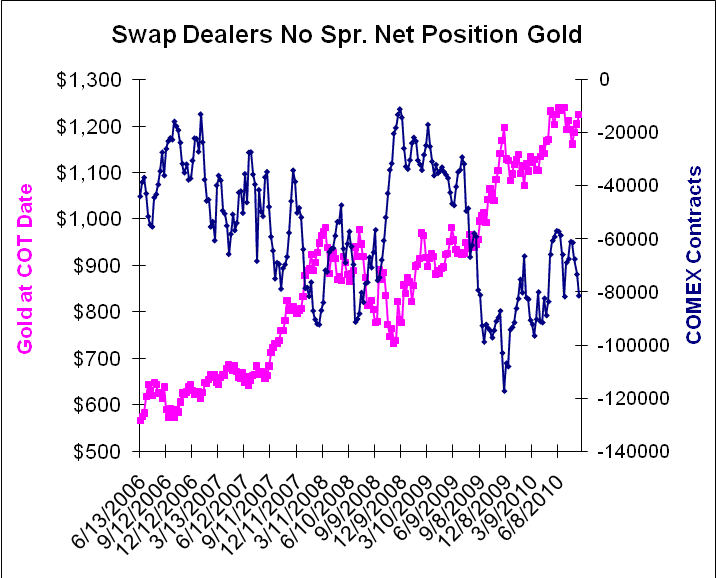 Gold tested the $1230s on Wednesday, Thursday and Friday last week, following the cut-off date for the latest COT report.

But as the Gold Price rose, it met with fairly determined "opposition". We know now that the opposition was likely coming from both classes of commercial trader on the Comex, division of the CME.

The bottom line is that even though we believe there is still considerable bull side firepower left to deploy, apparently both classes of Comex commercial traders believe that gold has moved high enough that they were comfortable taking the short side of nearly all the "new" Comex gold action. The LCNS did not increase MORE than the open interest increased, and ALL of the sell-down attempts this trading week failed to get any downside traction. But the fact that both the PMs and the SDs were on the "same team" this week is a "tell".

For our paying subscribers, it's time to protect at least partial profits and to raise our trading stops on our new gold trade until we can see the next round of COT data. Does that mean we now expect a gold sell-down? No, not necessarily. It is just that a sell down would not be as surprising as it would have been last week or the week prior. Just about anything is possible in the short term. With expiry of the current Gold Futures contract now looming just ahead, plus weakening economic data here in the US, and with silver unable to "answer" gold's recent gains, we would be remiss if we didn't become more cautious just ahead.

Our view is that the COT action for gold is neutral to slightly more bearish than bullish very short term. But we remain of the view that significant dips should be well bid just ahead. Longer term the Great Gold Bull marches on.

Want to Trade Gold short term, while keeping a low-cost "buy and hold" position as well? Start at BullionVault today...