END_OF_DOCUMENT_TOKEN_TO_BE_REPLACED

The outstanding total of Gold Futures contracts is but one signal. Albeit, a cautious one...

IT TOOK a little longer than we thought it might, but gold finally balked as the third quarter got underway, writes Gene Arensberg from Atlanta, Georgia in his Got Gold Report.

There were actually a number of harsh reversals happening simultaneously, however. So gold investors shouldn't feel alone.

The US Dollar index repelled lower as the Euro index popped and popped big. The TED spread, which is a measure of bank confidence, dropped for a second week, falling below 38 basis points, down more than 10 points or more than 20% inside two weeks, and thus suggesting that Eurozone systemic banking fears are easing.

The Big Sellers of gold and silver seem to have prevailed, finally, perhaps sending us into a summer correction. So far the sell-down hasn't yet made it into our expected zones of support and there is no guarantee they will. But, until this pullback got underway, we feared a runaway breakout might take off without our short-term trades on. Now, we are hopeful this pullback will take both gold and silver into our "wheelhouse", which is where we are more comfortable attempting a reentry with our short-term trading cash.

Longer term, we still see nothing which undermines the secular bull market thesis for gold metal. Over the coming weeks, however, if the Big Sellers (or fearful late longs now running for the exits) drive precious metals not all that much lower from last Friday's close, and down into our expected zones of potential support, we are very likely to rejoin the short-term battle, too. That's our Simple Simon game plan for summer trading. And if we do get the chance for re-entry just ahead, it will only ever be with appropriate trading stops in place for peace of mind and protection.

Just after our last report for Got Gold readers, the Gold Price went on to print a marginally higher high at $1265 the ounce. But as it did so, the open interest on New York's Comex Gold Futures exchange exploded by more than 33,000 contracts – meaning that a tremendous amount of bull firepower was expended on just a few measly Dollars of gold gain.

Another way to say that is that as gold advanced to a little higher high it encountered very stiff opposition – at least in the New York futures pit. And with a record (or near-record) Comex open interest, gold then consolidated for most of the next two-week period in a range bounded roughly and nervously by the $1220s and the $1250s. Then, on Thursday, July 1st – the start of a new quarter and of the second half of the year – it was as if switch was thrown.

Lots of markets suddenly and violently corrected. Thursday saw gold thumped for more than $40, silver thwacked for more than 80 cents, the US buck was gutted for 150 basis points, the Euro index popped more than 270 ticks(!)...and on down the screen it was a day of remarkable and frankly unsettling harsh corrections to the recent trends.

Violence and chaos, yes. Stability and certainty? No.

There are no guarantees in this business, only indications. Nothing at all says that a record-sized Comex open interest of over 600,000 contracts is a "speed limit" or "stop sign", much less a guarantee that gold is about to correct. Nothing says that the open interest couldn't go much higher. It probably will someday – and maybe soon.

However, record high open interest is not among the bullish signals we prefer to see. Indeed, extremely high open interest often (but not always) occurs near gold-market pullbacks and corrections with some very unusual and spectacular exceptions when the Big Sellers of gold were overrun by overwhelming demand – twice in 2007 for example.

High open interest is but one signal though. There are others equally important to our impressions of the market. As we said two weeks ago, gold could suffer a fast $100 pullback from this level and not even threaten its very bullish uptrend technically. With confidence weakening in all fiat currencies – plus downright disdain for the current cast and crew in Washington – we find it easy to imagine that the Gold Price will be well-supported on most any significant pullback.

Therefore we believe that significant to strong dips for gold may be bought with confidence, but we do not think significant advances should be sold. We cannot conceive of an acceptable reason to short gold metal, except to hedge. 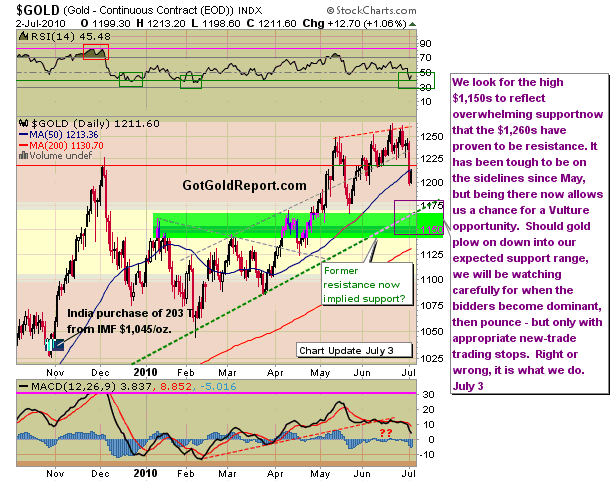 One of our trading brethren, who because of his affiliation with a big firm has to remain nameless, argues that we have our support zone "way too high". He sees gold trading to well below the 200-day moving average by end-August, and "probably to the $1040s again."

His reasoning is that most everyone who is apt to be involved with gold has already invested and therefore it is now time for what he calls a "major-major correction". Not just a garden variety pullback.

We argue that in May gold bounced smartly at the very top of the zone we thought might be former resistance morphing into current support, and that we find it difficult (but not impossible) to imagine gold being driven down 18% from its June 21st highs. Not with so high a short interest in place, so much demand for physical metal, and so much uncertainty out there.

If my friend turns out to be right, and if gold does plough on down a total of 18% or more, then the Got Gold's short-term trading position will have likely entered and been stopped out at least once! But we plan to continue to tentatively mark the high $1150s as potential support for gold with resistance now marked at $1265 – until proven otherwise on both counts.