END_OF_DOCUMENT_TOKEN_TO_BE_REPLACED

Gold Futures trading just saw the most dramatic drop in open interest ever...

SOMEHOW we are reminded of the scene in Jurassic Park where Samuel L. Jackson's character utters the defining line of the movie, writes Gene Arensberg in his GotGoldReport...

While about to flip a switch that represents temporary safety in a collapsing overly-complex system designed to separate humans from genetically re-engineered, very carnivorous, very deadly dinosaurs, "Hold onto your butts," the chain smoking systems analyst says.

Now, just about everyone knows that the cause of the big drop in the "open interest" in Gold Futures last week was due to a small hedge fund closing out an amazingly large number of spread trades relative to the total "line" of a reported $10 million.

Reviewing the Tuesday-to-Tuesday data – released just after Friday's close – we believe that this is indeed the largest one-week drop in open interest for the Comex Gold Futures contract between Commitment of Traders' reporting dates ever. We are certain it is the largest since 2000, with the now second largest Tues-to-Tues drop in open interest we can find having occurred on April 1, 2008, a big plunge then of 52,800 contracts with gold trading in the $880s.

One of the better stories on it was by the Wall Street Journal's Carolyn Cui.

"A huge trade by a tiny hedge fund has sent shudders through the gold market. Thanks to the nature of futures trading, Daniel Shak's $10 million hedge fund held gold contracts valued at more than $850 million, more than 10% of the main US futures market, and the equivalent of South Africa's annual gold production."

We wonder if the CFTC and the CME realize just how bad a story like this one appears to professional traders. And how about to ordinary folks and non-traders?

It sort of gives new light to the term "accountability limits" doesn't it? How did a fund with as small a "stroke" as SHK Asset Management manage to control so large a portion of the spread trades...? 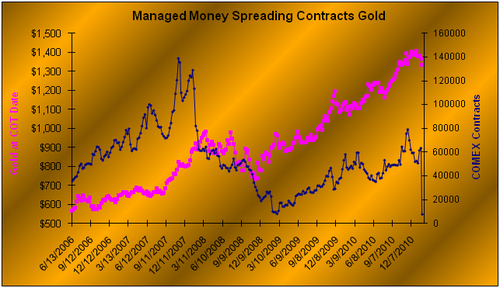 At least Mr. Shak had the good sense to exit before his spreads wiped his fund out completely, or worse. Shudders indeed.

In the Managed Money spread trades section alone [Ed.: where investment funds large and small try to pick winnings of changes in, not simply the direction of, Gold Prices...] the open interest sank by 55,523 contracts, down from 63,507 to 7,984 spreads open, as shown up top.

We are saving the chart we found most interesting in this week's Commitment of Traders data for our full GotGoldReport subscribers. But from Tuesday to Tuesday the total open interest on the Comex for Gold Futures plunged 81,785 contracts from 587,832 to 506,047 contracts open. By Thursday, the open interest had fallen to 488,926 contracts open, the lowest gold open interest since March of 2010 (482,786 open then) with gold then in the $1130s per ounce. 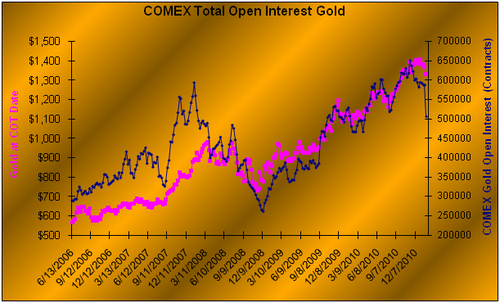 Riots in Egypt, food prices the biggest driver. Tunisia merely the first of the dominoes? Internet and cell phones dead there, but the story gets out. Contagion risk, Jordan, Kuwait, Saudi Arabia, et al...Some blindly blame Islamic militants, but is the blame for high commodity and grain prices the fault of the "trogs" and religious luddites or a combination of bad weather and Dr. Bernanke's goosing gobs of new liquidity to keep the West's debt-ridden, water-logged and listing party ship afloat?

Bombs in Moscow's largest airport as the political elites of the world gather for Davos 2011...World Dominance "help" is on the way! (God help us, please.) No worries, the Fed says full speed ahead for the remainder of QE-2. Then what? In January the West "takes profit" on gold and silver (just like 2010?), booking gains in paper on the notion that "things are getting better" while the East and Asia are seen stepping in to buy – in size! Best explanation: The West is chasing Big Market performance, cashing in the last 11 months of 2010 precious metals gains, nervously looking in the rearview mirror while the East is looking squarely ahead.

The US economy is expanding contrary to doomsayer predictions, but America has a Fed backstop for now measured in the tens or hundreds of billions of newly printed debt-based dollars – each quarter till June. That has lots of folks eagerly bullish on U.S. stocks, twice as many as are bearish according to the AAII. Volatility as measured by the VXO index is ominously low, but bouncing now, as expected.

Meanwhile, one-point-five-trillion is the red ink proposed for next year here in the States, all of it borrowed, the big spenders hope. State debt is equal to or more than the entire U.S. debt say some sources. Economic contraction in the UK...Dr. Copper "says" the patient is improving as the Baltic Dry index shrivels to $1,186. (Blame floods in Australia the experts say, not economic slowing.)

Big plunges in open interest on the Comex Gold Futures market explained – one very small hedge fund took a powder and closed shop on way too many inter-commodity EDS (Exchange Defined Spreads)...UK Brent crude oil very strong, when WTIC crude not so much. One of them is "wrong", but the trend is clearly north for both. Keep an eye on Nigeria too. Trouble likely looms there sooner, not later.

The HUI index of Gold Mining stocks gamely holds its critical 490 support but the bounce is anemic thus far. Gold stocks are, after all, stocks...Agnico's Boyd: "Gold $2000 in 2011." Sprott's Embry: "Gold $2000 in 2011." BNP Paribas "$1565 by year end." Jeff Nichols, "$1700 ahead." A consensus building? Gold bears can still listen to Doug Kass if they need a hand-hold. According to the World Gold Council investors added 361 tonnes of gold metal in the ETFs they track in 2010. China imported 4X as much silver in 2010 as they did in 2009. Six years ago China was a silver exporter big time. Now the opposite big time times four. Is that 1979 demand for silver times four also? For less than half the amount of real silver metal available? Yes, we think it very well could be, or more.

President Obama: "Our free enterprise system is what drives innovation." Right, Mr. President, quit trying so hard to strangle the innovators and job creators, please. Don't fade the Fed. Don't forget to duck. It's about to get really interesting again. As interesting as a slow-motion train wreck in 3-D...