END_OF_DOCUMENT_TOKEN_TO_BE_REPLACED

The fundamentals for gold relate to the confidence level in paper currencies...


WHEN DEMAND FOR THE US DOLLAR outstrips the supply, the value of dollars goes up. But the supply of dollars has been rising steadily at an average of 10% annually from less than $1 trillion in 1980 to over $12 trillion today – and the fundamentals for gold today have much to do with the resulting drop in demand for US dollars.

When Dollar-denominated assets lose value, people ditch dollars. As we have documented since the credit crunch began in August, the subprime mess has been the Dollar's worst disaster in the last three decades. The subprime meltdown is now causing supposedly high-quality government sponsored debts to be selling at 70 cents on the Dollar (Mad Cow contagion as we call it).

With the subprime mess as an extensively featured headline, and global central banks coming together to combat mortgage liquidity crises by printing their own currencies to support US mortgage debts prices (interestingly lead by the ECB, not the Fed!), the Dollar crisis relative to other fiat currencies may have reached a climax. This means the fall of US Dollar index may be suspended, at least temporarily.

In Nov. 2007, the Canadian Dollar at one point traded at a 10% premium to the US Dollar, highlighting that other fiat currencies have been the main beneficiary from the current flight from the Dollar. However we'd like to point out the ECB-led charge in printing Euros, the slowing Canadian economy, the housing/mortgage problem in the UK, and a widening trade deficit in Australia are cases where the outlook for other countries' respective currencies are mixed at best.

With Gold Prices already more than having tripled from their low of $250 per ounce, the fundamental driver for gold in 2008 will likely come from the flight from other fiat currencies besides the Dollar. This means that gold and the US dollar index may very well rise in tandem. Technically, the Dollar index is rebounding and gold has just broken out from the Euro, Canadian, and Australian Dollars.

Gold has lagged behind oil and base metals such as copper since the commodities bull started in 2001. Theories for gold's shortcomings are many, ranging from gold's antiquated status to the famous manipulation theory.

Gold's antiquated role is rubbish. While we believe manipulation exists, as with just about every market, its impact is very limited and dramatically hyped up.

We can only speculate on gold's somewhat lackluster performance to date, mainly China keeping prices at bay. Without China, most consumer goods from computers to blankets to shoes would be selling at least at 30% higher prices. However with revaluation of the Renminbi now well underway – and already USD $1.2 trillion being held by China – we will now see Chinese goods steadily rise in prices in Dollar terms.

There are lots more investment opportunities from real estate in Thailand to IPO's in Bulgaria to soak up excess dollars. However, with most emerging equity and real estate markets already doubling and tripling, the easy money has been made.

Current investment psychology says that, after two decades of being taught inflation is dead, the new generation of money managers are only now grasping that inflation is alive and well. It was only five years ago that the public was fretting about Japanese-style deflation. The Federal Reserve talked of deflation while oil zoomed from $20 to nearly $100. However, now can see that $100 oil means inflation.

These three reasons for gold's trailing performance vs. other commodities are now vanishing. Technically we can see gold is rebounding against oil and particularly copper. 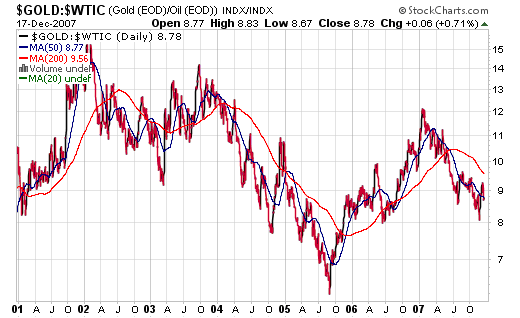 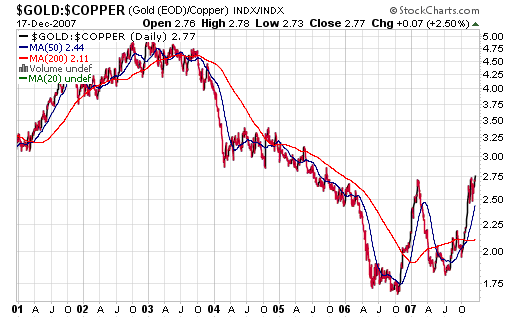 While the XAU gold stock index has raced from 50 to 160 since 2001, it has failed to live up to the expectation to most investors, many of whom are looking for ten-baggers '70s style. 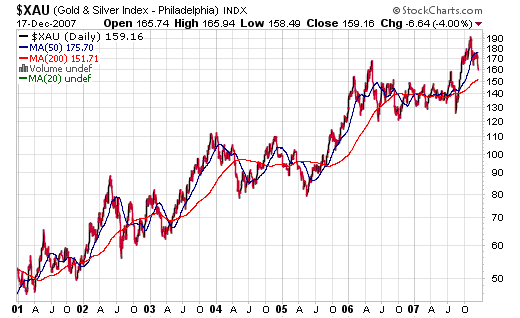 The XAU is now only trading slightly higher than it was in April of 2006 when the Gold Price was $700. Considering gold was $850 while oil was $40 in 1980, it is understandable that gold miners disappoint today, since the Gold Market has yet to outperform oil and other commodities.

The fundamentals for gold stocks thus look grim factoring into today's Gold Price, high energy, and labor costs. Indeed many gold explorers with defined resources declined so much in price that they are selling as if gold is back to $300.

But as the CEO of GoldCorp Ian Telfer puts it, gold miners are a special investment class as people buy them for the optionality on gold, not necessarily near-term earnings. So valuing gold companies based on today's gold and oil prices is akin to driving using only the rear view mirror.

Besides, many project valuations are based on a Gold Price substantially lower than today's market value. Those bearish sentiments are not typical of a top in gold and gold stocks. When projects and companies are being valued at a premium Gold Price to spot, then we know the peak is in place.

There is a simple metric in measuring such premium: the XAU over Gold ratio. When the ratio is high, XAU is selling at a premium to Gold, and when the ratio is low, this means gold and gold stocks are both selling near the bottom. As you can see currently the ratio sits very close to bottom. 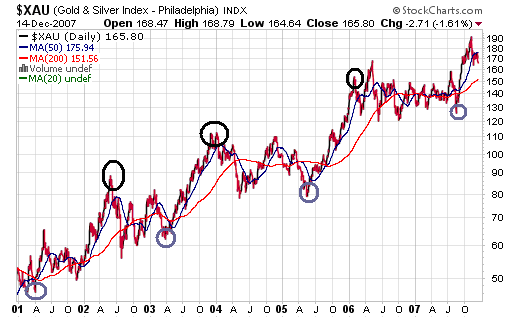 In conclusion, with the collapse of the US mortgage-debt markets, gold's fundamentals have never been more bullish. The second bull phase will start as gold breaks out against all other fiat currencies.

Comparatively gold has lagged other commodities this decade so far, but we believe that the factors driving such underperformance are reversing in gold's favor. Gold stocks have slumped as energy and labor costs outpaced the rise in Gold Prices.

Emotions and the sentiments pendulum have swung from one extreme to the other, but we expect such pessimism in gold stocks today to turn around to eventual euphoria in due time. Fundamentally and technically gold stocks are firmly in a long term uptrend, staying put in a bull market while some impatient gold bugs ditch their positions may just be the best prescription for the temporary winter blues.

For those of you who received cash Christmas presents, you can visit Gold Mau for our report on five all-star cash-rich resource junior companies that we like and own ourselves.