END_OF_DOCUMENT_TOKEN_TO_BE_REPLACED


Did Gold Prices just go into backwardation? What is a gold forward rate anyway...?

THERE HAS BEEN MUCH excitement among gold aficionados this week, writes Brad Zigler of Hard Assets Investor.

That $34-an-ounce end-of-week rally last Friday did plenty to brighten their spirits. And Monday's $28 follow-through punched spot Comex Gold Futures above the $800-an-ounce mark for the first time since October 20th.

Gold rallied because...because...well, just what was the reason?

Some among the chattering classes online would have us believe the spike was foretold by gold tipping into what they dubbed "backwardation". Well, not gold per se. Rather, gold forward rates.

Backwardation, as described in several Hard Assets Investor articles, exists when the price of a commodity for immediate delivery is higher than its price for delivery in the future.

For an easily stored commodity like gold, backwardation implies scarcity of supply. Gold Bullion delivered today is deemed more valuable (by the market, at least) than gold to be delivered next year.

Ordinarily, in contrast, contracts for later delivery are most usually priced higher than Spot Gold. The costs of storing gold are included in Comex gold futures contracts, along with a measure of how much bank-deposit interest the seller will lose by holding metal instead of cash between now and the date of delivery (the cost of "carry").

All told, this extra charge over and above the current price for immediate, physical delivery is known as a "contango". Forward rates, on the other hand, are the interest charges levied by dealing banks for lending gold. These rates are calculated for various maturities on a swap basis against US dollars. I give you gold today in exchange for cash, on the understanding that – minus my fees – I'll return your cash to you when you return my gold at an agreed point in the future.

Normally, the forward market looks like any other yield curve, with near-term rates lower than those of longer maturities. (Longer-term loans and deals should, normally, carry more risk.) Those rates, too, are ordinarily positive. It costs you to borrow gold, rather than the bullion banks paying you to take it off their hands.

But what was noted as backwardation last week was the quotation of negative forward rates in the London dealer market for one- and two-month gold loans. That sent the discussion boards buzzing.

"Does this mean banks will pay us for borrowing gold?" asked more than one denizen. Don't you wish... 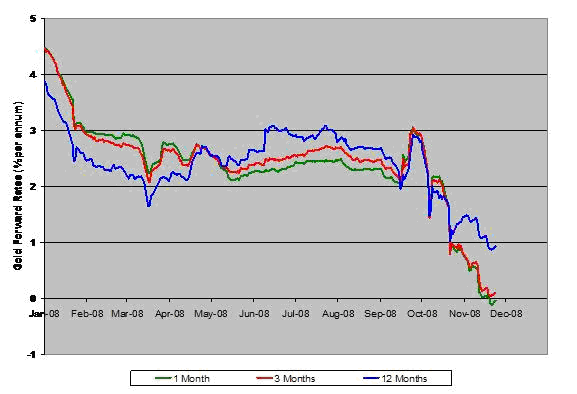 Gold forward rates as shown on this chart seem to suggest the cost of borrowing gold for one month from, say, central banks, as just gone negative.

But that's simply not true, and sense can be made of negative forward rates once you understand how the metal is traded in the lending market, known as the "lease market".

Just as changes in supply and demand affect metal prices, so too do changes in the demand for borrowing and lending affect gold lease rates. If gold is readily available, lease rates will be low; if the supply of borrowable metal is tight, rates will rise.

Remember, though, we're talking about gold in the lease market here, not the cash metal marketplace. That's a big difference most pundits miss. Unless you're a bullion bank or major institution, leased gold simply isn't available to you anyway.

A negative forward rate does not automatically create a backwardation in the Gold Price. The forward price of metal, reflecting its cost of carry (meaning storage and lost interest on cash deposits), is determined on the basis of the spread between an available investment rate – such as the London inter-bank offered rate (LIBOR) – and the gold forward rate. This therefore yields a positive value, unless LIBOR falls below the forward rate.

That's not to say – as many commentators charge – that central banks holding gold aren't lending it out in a bid to stimulate the credit markets. The current lease market reflects central bank stimulus at work, much like your neighborhood bank looking to fill gaps in its asset-liability book. Have you ever seen certificates of deposit advertised with special rates by your bank? Certain maturities may be offered at high rates if the bank has a funding need in a particular time bucket. It's the same thing in the Gold Market, save for the fact that the bank here is advertising a cheap asset rather than a high priced liability (from the bank's perspective, that is).

Bullion lenders are trying to encourage gold borrowing now, particularly in the short maturities. Central banks are liquefying their gold reserves to stimulate aggregate demand. Rates have gone negative at the short end because demand for gold shorting has dwindled. (Gold borrowing necessarily results in the short sale of metal to raise investment funds for the borrower.) 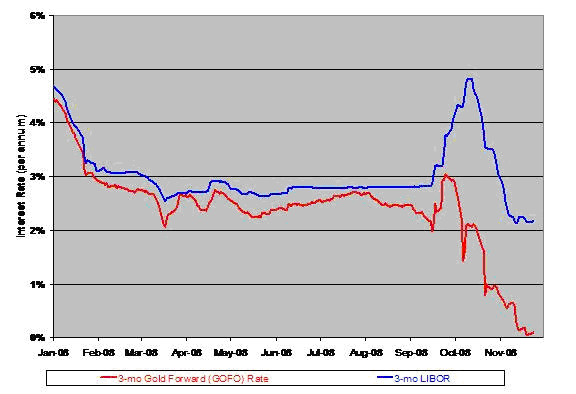 This chart illustrates that the gold "carry trade" – where central banks lend Bullion to raise cash and stoke credit – has become more profitable as the financial markets have melted down.

The spread between LIBOR and forward rates widened by nearly 200 basis points (almost 2.0%) in just one month's time at the front end of the crisis. And this goes a long way to explain why gold didn't reach new highs during the crisis. Borrowing gold to sell it straight into the physical market became a simple, instantly profitable trade...expanding supply in the professional wholesale market even as demand from retail investors sparked a Gold Coin Shortage further down the chain.

So now what? Well, let's see if we can't take a lesson from the past. Only on two previous occasions have forward rates turned negative. One-month forward rates went negative on two days bracketing a weekend in March 2001, less than a month after gold bottomed in London around $257. At the time of the inversion, gold was fixed around $269. Not much happened pricewise by year's end, though ultimately, that was stage-setting for gold's current bull market.

Previously, forward rates – at all maturities – went negative on two days in September 1999, which did presage a significant rally above the $300 level. So this lease rate business doesn't mark the strongest of bullish indicators. But it is worth understanding if you've read elsewhere that "Gold's in backwardation!"