END_OF_DOCUMENT_TOKEN_TO_BE_REPLACED

How to rebalance your risk with gold in this time of financial crisis...

AS YOU NO DOUBT KNOW, Federal Reserve Chairman Ben Bernanke has gone on record stating that – should he feel the need has arisen – the Fed will print dollar bills by the helicopter load to smooth over a collapse in the 25-year borrow-and-spend bubble, writes David Galland for Big Gold, a collapse that is now underway.

Putting Bernanke's words into action, since early August of 2007, the Fed has stepped up to the plate with tens of billions of dollars. On November 15 alone, the Fed injected almost $50 billion into the banking system, the largest single-day cash infusion since 9/11.

Then, on December 12, the Fed announced that it would open the spigots by providing lending $28 billion created out of nowhere to the nation's banks in exchange for a "wide variety of collateral."

In other words, the Fed will now accept as collateral against new loans to private banks the very toxic waste now bedeviling the global financial system.

And that's just one of many ways that the US government, along with all other developed-world authorities, is scrambling to keep the house of cards from toppling over.

For example, there are 12 Federal Home Loan Banks (FHLBs) whose job it is to serve as "lenders of last resort" by making cash available to banks and other financial institutions. In the third quarter of last year alone, FHLB loans skyrocketed to a record $746.2 billion, nearly 18 times the yearly average between 2003-2006.

That fact should tip you off to just how serious Washington considers the current credit crisis to be. And no wonder. The following chart shows the steeply worsening increase in non-performing bank loans and outright charge-offs.

Faced with the very real threat of a deep recession caused by a freeze-up in credit, falling home values and soaring loan defaults, the Fed is left with a rock-and-a-hard-place decision. Hold tight and let the economy fall...hard. Or, open the money spigots wide in an attempt to maintain liquidity in the markets, sacrificing the Dollar in the process.

Given two untenable choices, it is our view that the government will continue on the path of a loose monetary policy, the implications of which are not hard to figure out. 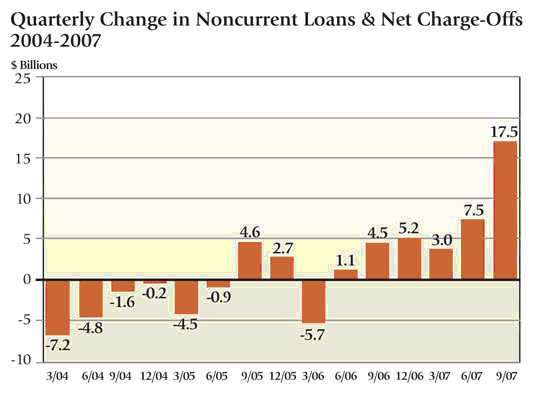 Sticking with the helicopter metaphor for a moment longer, creating billions of new dollars out of thin air to smooth over a litany of problems caused by decades of irresponsible debt creation is analogous to a helicopter trying to put out a raging forest fire by dropping tank loads of gasoline.

In other words, the "solution" is more of the same. It is only making the situation worse.

The result is simply this: as more and more dollars are created and injected into the economy, the purchasing power of all the dollars in circulation comes under pressure. It's called inflation. The last time we saw anything like what we are seeing today was in the 1970s. Here's a snapshot of the Dollar against foreign currencies, then and now. The parallels are eye-opening. 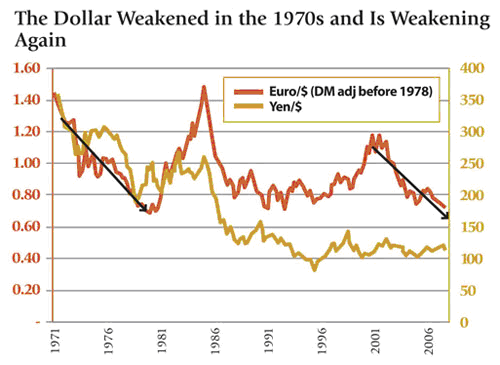 You don't need me to tell you that, regardless of what the Fed would like you to think, inflation is already a problem. Yesterday I paid $3.10 for a gallon of gas, $7.50 each for movie tickets, and just shy of $30 for two cheese Stromboli's following the show.

Since March 2002, the US Dollar Index, which measures the value of the Dollar against a basket of six major currencies, has fallen 35.3%. The downtrend in the US Dollar is far from over.

Once you've identified the problem, identifying how to balance the risk to your portfolio is easy. In times of inflation, people turn to tangible "stuff." Viewed in that context, it is perfectly understandable why oil, gold and other commodities have been moving higher.

And, just as the US Dollar has farther to fall, so do the commodities have farther to rise. On that point, JPMorgan went on record a few days ago with their forecast that of all the commodities, they expect precious metals to be the strongest in 2008...followed by agricultural products, base metals and energy.

We think JPMorgan has it right, and that of all the possible portfolio diversifications you can make today in an attempt to protect your overall portfolio and to profit over the coming year, few will serve you better than Buying Gold.

But Isn't Gold a Relic?

The younger generation of money managers know little about gold. They know about structured investments such as those that are now failing left and right, but they don't know about the Gold Market.

Rather, they sneer that gold is a barbaric metal, an artifact from yesteryear. And they're right.

While gold doesn't go up in a straight line – no investment does – it has been considered real money since about 4,000 B.C. Compare that track record against that of government-issued paper currencies. Actually, there is no comparison.

Given the historical record, it's hard to argue with the adage that all paper money continually falls in value, just at varying rates of speed.

And, since 2002, that is exactly what has been happening. In fact, while the next chart shows just four currencies, over the last six years gold has risen in all the world's currencies. As you can see, the price rose more in yen, because the yen has been weaker than the dollar; and it rose less in euros because that currency has been stronger than the Dollar.

Bottom line: for the last seven years, gold has been a better investment than paper currencies. We can expect this trend to continue and to accelerate. 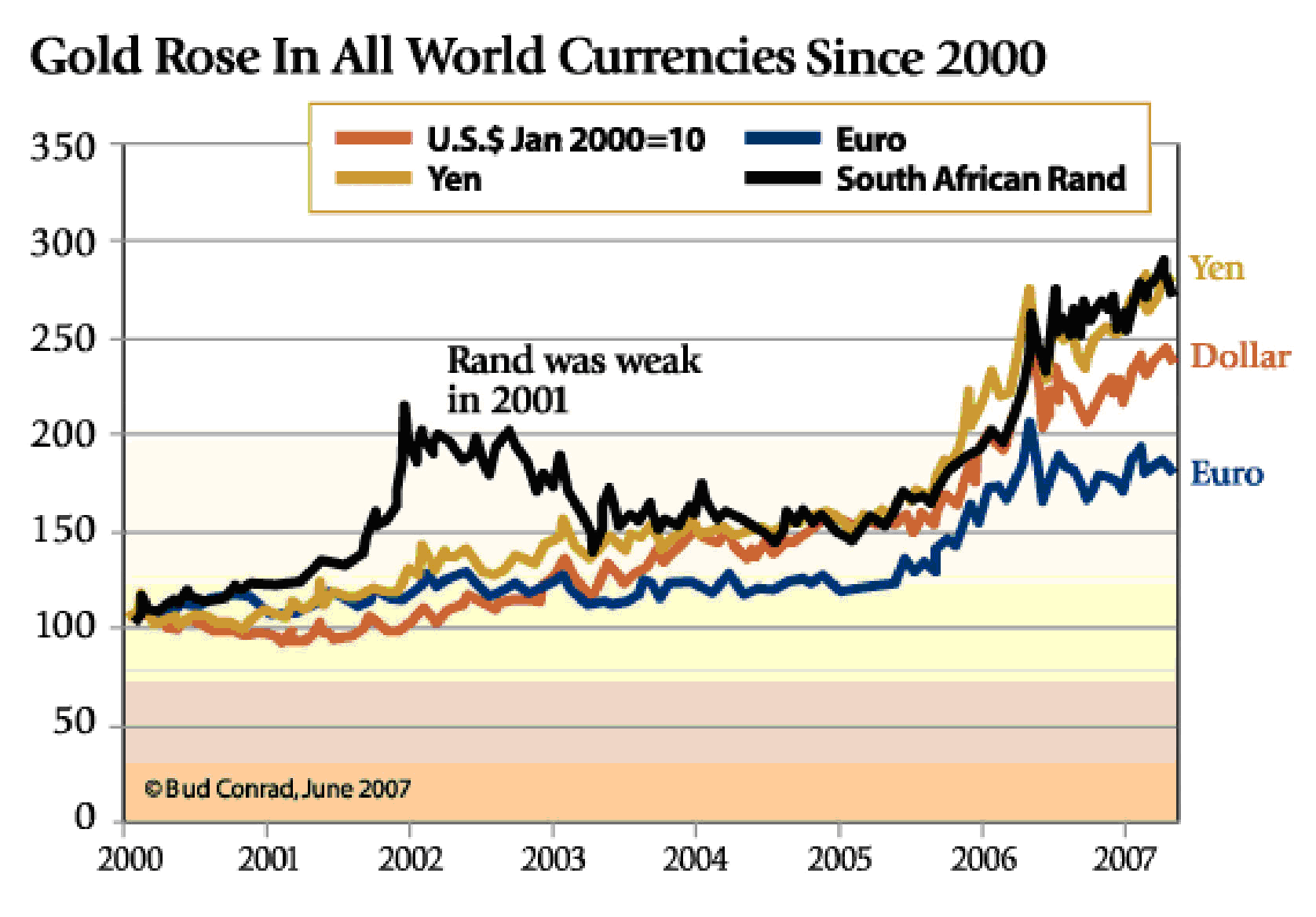 A minute ago, I mentioned that since March 2002, the US Dollar has fallen by 35.3% against a basket of six major foreign currencies. Well, over that same period the Gold Market has risen by 181% against the dollar. (And the HUI Index of large cap gold stocks, the sector you want to play in to get more bang for your buck, has risen 367% over that same period.)

But why is it that gold is still considered a store of value after all these millennia? Why is it that record numbers of investors – private and institutional – are beginning to turn to more modern forms of gold, including gold ETFs and, of course, the shares of established gold mining companies?

For the answer to that question, I defer to none other than Aristotle who, in the fourth century BC, explained why gold is money...

To serve well as money, an object must be:

Of all the 92 naturally occurring elements, none fits the requirements better than gold. No one ordained that it should be money; it grew into that role through the practical decisions of millions of people over thousands of years.

Not to pick a fight with Aristotle, there's another essential characteristic I'll add to the list. For an object to serve well as money, it must be difficult to produce – otherwise, a growing supply of the object will undermine its value. Gold is again the standout. Adding to gold reserves requires a massive expenditure of labor and capital to find it and dig the stuff out of the ground.

So difficult is it to produce, all the gold ever mined would fit into a cube roughly 25 meters on a side – and that's something no politician or banker can ever change. How different from paper money, and even more different from the deposits the Federal Reserve regularly creates just by running electrons (there are plenty of them, and they don't cost much) through a computer.

Key for the Gold Price is how little the new supply of gold added each year – only about 80 million ounces ($62 billion worth at today's prices). That amounts to a gross "inflation" rate for gold of 1.6% per year, compared to the existing supply of approximately 5 billion ounces. And gold's net inflation rate is actually a little less than that, since some amount of metal disappears every year in uses that are not fully recoverable.

Competing forms of money – the US Dollar, for example – typically increase at an annual rate of 10% or more (in some years and in some places, much, much more)... and have been doing so for decades. Per the above, as we head into 2008, we see the increase in the supply of US dollars ratcheting up well above the norm.

Given the easy-going creation of money by politicians trying to paper over today's problems and yesterday's expensive promises – don't forget that 76 million baby boomers are now beginning to enter their retirement years, triggering a demand for trillions of dollars in Social Security and Medicare entitlements – every minute a few more people become uncomfortable with the thought that everything they own is just paper. That's when they become potential gold buyers.

What might happen to gold prices if this process were to accelerate or if there were a general shift in attitudes about paper money?

The total market value of all publicly traded stocks is about $50 trillion. If just 5% of that total value shifted toward gold – which could happen with just a modest uptick in worries about paper currencies – $2.5 trillion would flow into gold. At today's Gold Price, that would buy all the gold in the central banks three times over. In fact, it would buy three-quarters of all the gold in the world, including wedding rings, gold teeth and the contents of the Saudi Princes' vaults.

Of course, such a thing wouldn't happen at "today's prices." Instead, this frantic Gold Buying would push the Gold Price sharply higher, perhaps by a factor of two or much more, to accommodate the increased demand.

In the final analysis, if you have not already done so, it's time to begin getting acquainted with gold and gold stocks as a portfolio asset.

David Galland is the managing director of Casey Research, LLC. For over 27 years, the Casey organization has been providing unbiased research to self-directed investors looking to profit from developing trends. If you're interested in learning more, check out BIG GOLD here, including the special report, "3 Prudent Ways to Profit from the New Bull Market in Gold".